9
10
Following the most impressive attempt yet on the round-the-world record, Mark Beaumont has produced a book to match
Weight:
570g
Contact:
www.penguin.co.uk
How we test

We frequently report on Mark Beaumont's cycling exploits on this website, including the start and finish of his recent round-the-world record attempt. As expected, there is now a book about it, and Around the world in 80 days will leave you in awe at the enormity of the challenge that he set himself – and the extent of his preparation.

Mark Beaumont has a well-proven formula that he has followed several times to good effect: find an attention-grabbing bicycle-based endurance challenge, plan thoroughly to set a new record, and try to make sure that everyone knows about the trip at all times. This is normally followed up with a book, some TV coverage, and various talks and appearances, which all help with his exposure. It all adds to the success of 'Brand Beaumont'. 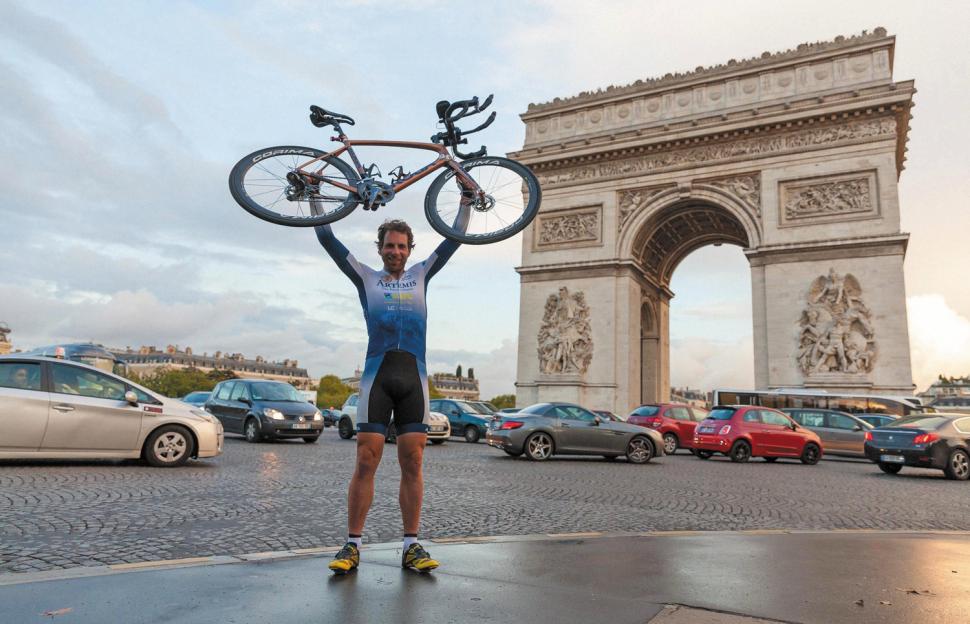 While '80 days' continues that theme, everything is taken to a new level: at first sight it might seem that he is repeating a previous exploit, but in reality, his first round-the-world trip has little in common with this one, even if both resulted in a world record. The plan was to spend 16 hours cycling an average of 240 miles per day for 75 days, with 'three days of flights and two days' contingency'.

The rules for setting a Guinness World Record have changed occasionally, but right now there are 'distinct world records for team and solo, males and female, but not for supported and unsupported'. If no distinction will be made, and your job is to break the record, then naturally you are going to give yourself every advantage – which means full support. That still makes for a serious undertaking: although there are benefits in being a supported rider, to quote Greg LeMond, 'it never gets any easier, you just go faster'.

The key difference between Beaumont's two trips is that this one is purely about performance, whereas the previous one allowed for some spirit of adventure – as have most other record attempts to some extent. Beaumont received considerable flak first time around for his professional approach, yet his preparations this time put him on another level.

Anyone who has read one of Beaumont's previous books (The man who cycled the world, The man who cycled the Americas, and African solo) will already know that he has always produced a fascinating account of his exploits – and he has managed to do the same again here. The difference this time is that the stakes were higher – and the achievement greater – than ever before. 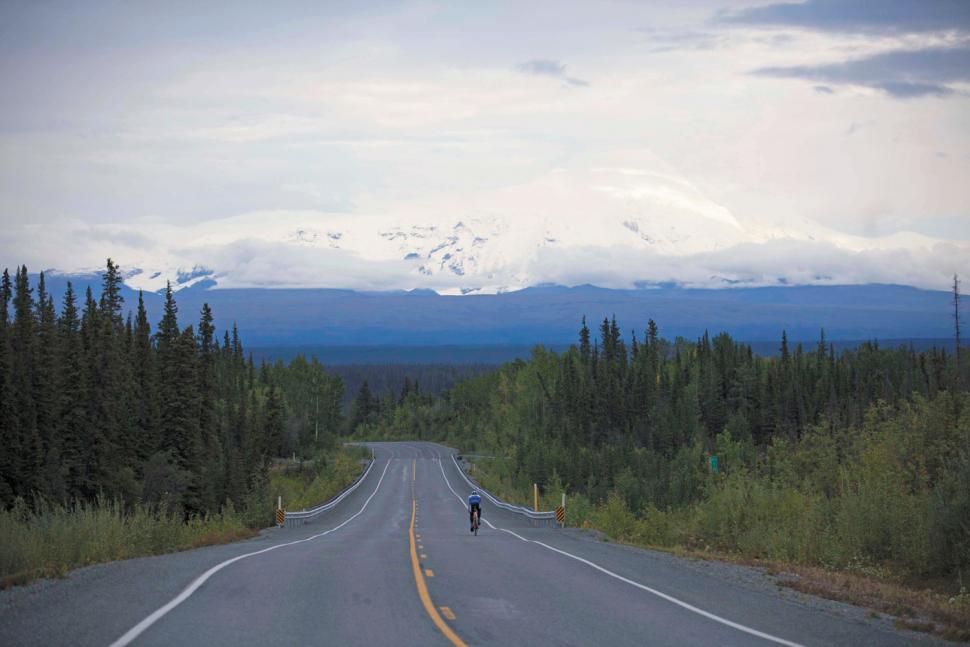 The first 100 pages of the book cover the preparation and planning for the trip, which is what makes this book different to most other similar accounts. It is clear that lessons were learnt from last time, and the increase in time spent planning before the record was in inverse proportion to the time spent actually cycling during the record.

Beaumont made assembling an extensive support team a top priority, and then proved that they could work together in stressful situations during several trial runs at 'lesser events'. The objective was to allow Beaumont to concentrate solely on cycling during the record attempt, with the team being capable of taking every other decision on his behalf. Not everyone made the cut, so a very competent mechanic was fired because he had 'an attitude that demonstrated he was more of a burden than a boon to the team'.

Another priority was to find the right sponsors, and Menzies Aviation turned out to be one of the most valuable because they had 'ground handlers in almost every airport I passed through'. A recent change to the rules 'stated, quite simply, that the clock never stops', so their practical support saved 'at least half a day' by allowing him to speed through airports. They also managed to negotiate away thousands of pounds of excess baggage charges, which was handy because they were the 'only omission I know of in our budget'.

Artemis were another important sponsor, who increased their initial support and agreed to 'step in and cover any increases in spend' so that Beaumont could 'stop fundraising and completely focus on the ride'.

> Buyer's Guide: 28 books every cyclist should have on their shelves

Naturally there was a high level of physical fitness required, and although the coverage of Beaumont's training is minimal, the results are still impressive: his resting heart rate dropped to 40bpm, his power-to-weight ratio increased to 4.6W/kg, he had 9% body fat, and he became 'a fat-burning machine'.

It is often mental toughness that makes the difference in any endurance challenge; consequently, Beaumont did some training on short loops, which 'meant having the discipline of getting close to home and forcing yourself to turn away, to do that extra loop to complete the time'. Even if Beaumont didn't need to prove anything to himself, it did help reassure his support team of his commitment.

Making arrangements to smooth the team's passage through the many border crossings was an obvious requirement, but a decision to work on 'challenge time' was not: essentially the team pretended that every day was 15 minutes shorter than 24 hours, which had the effect of smoothing out each time zone change and prevented any sudden shocks to the routine from losing a complete hour every time.

Although there are a few pages on the bike and Beaumont's other kit, you won't find any detailed specifications, nor much advice on choosing equipment.

There is a brief discussion about the 'well-known yet confusing fact that Strava logs data differently from Garmin – even though it is taking that data from the Garmin unit'. Recording distances accurately was going to be doubly important this time, as Beaumont was planning for his route to be a mere 30 miles more than the minimum 18,000 miles required, whereas 'a decade ago I had given myself a slightly ridiculous 300-mile margin of error'.

The account of Beaumont's time on the bike is as good as any of his previous works, and conveys all the emotion that you would expect to experience during such a gruelling ordeal.

No matter how good the planning, things can go awry at any point, and the first unusual setback came as early as day nine when Beaumont crashed and broke a tooth (as well as fracturing the radial head in his elbow). The dental repair by the roadside a few days later was prepared in advance and took less than 35 minutes to complete.

A more serious delay occurred on day 39 in Australia, when the support vehicle was involved in a road traffic accident. Even on day 76, with the end in sight, Beaumont could have thrown it all away because he crashed again when 'just flicking my Garmin screen'. Perhaps the auto-scroll function would have helped? Although this book is not meant to be a guide to setting a circumnavigation record, it would be essential reading for anyone thinking of having a go – although that is likely to be a small market! You wouldn't need to worry about Beaumont taking the record back off you, because he won't be going a third time: 'This is the first time in my career I feel like I have nothing to prove to myself in terms of endurance.' Indeed, Beaumont says he is prepared to mentor anyone who wants to break his record.

Following the most impressive attempt yet on the round-the-world record, Mark Beaumont has produced a book to match

Make and model: Around the World in 80 Days by Mark Beaumont

The inspiring story of one man's record-breaking cycle around the world.

On Monday 18th September 2017, Mark Beaumont pedalled through the Arc de Triomphe in Paris. 78 days, 14 hours and 40 minutes earlier he set off from the same point, beginning his attempt to circumnavigate the world in record time. Covering more than 18,000 miles and cycling through some of the harshest conditions one man and his bicycle can endure, Mark made history. He smashed two Guinness World Records and beat the previous record by an astonishing 45 days.

Around the World in 80 Days is the story of Mark's amazing achievement - one which redefines the limits of human endurance. It is also an insight into the mind of an elite athlete and the physical limits of the human body, as well as a kaleidoscopic tour of the world from a very unique perspective; inspired by Jules Verne's classic adventure novel, Mark begins his journey in Paris and cycles through Europe, Russia, Mongolia and China. He then crosses Australia, rides up through New Zealand and across North America before the final 'sprint finish' thorough Portugal, Spain and France, all at over 200 miles a day. This is the story of a quite remarkable adventure, by a quite remarkable man.

Title: Around the world in 80 days

Although 'only' a paperback, in the 'trade' version it offers a lot of book for the money.

The insight into the planning and preparation.

As a record of events it does justice to an exceptional achievement: both the trip and the book are Beaumont's best yet.