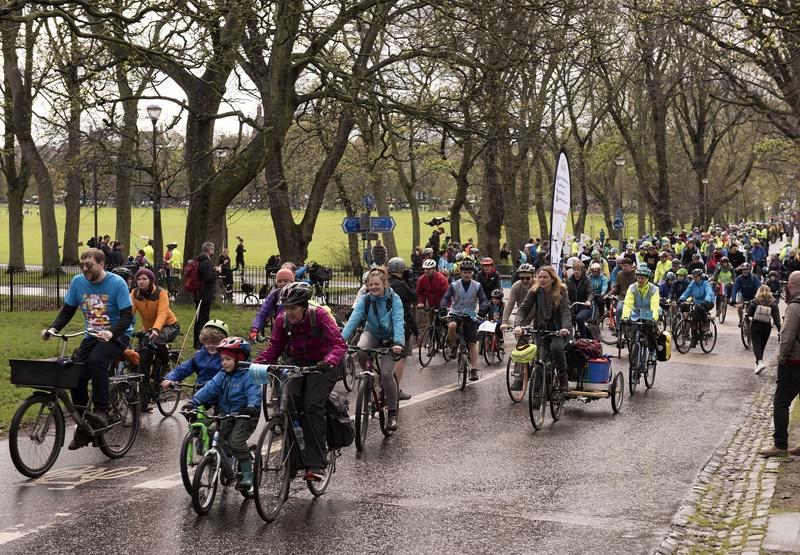 Thousands of cyclists descended on the Meadows in Edinburgh this morning where round-the-world record holder, Mark Beaumont, led off the seventh annual Pedal on Parliament (PoP) protest on a cargo bike carrying his daughters. A sister ride also took place in Inverness, with another planned for Aberdeen tomorrow.

The rides are to ask politicians to sign up to the Pedal on Parliament manifesto to make Scotland a cycle friendly country for people of all ages and abilities.

Speaking at the event, organiser Sally Hinchcliffe said: “We want nothing less than to transform Scotland. That is our goal. It’s a hard change to make. We do have more money from government – and we are grateful for the investment – but the money is not enough. We need space to cycle and we need to take that space from cars.”

Speaking after a minute’s silence to remember those who die unnecessarily on the roads, Beaumont said: "This specific ride, Pedal on Parliament, might be incredibly short in terms of distance, but I genuinely think its overall effect can be pretty profound.”

He added: "While I believe progress has been made over the past seven years to make Scotland a safer country to cycle in, it is massively important that our MSPs understand how vital safer roads and better infrastructure are for everyone.

"It's only through a mindset of sharing roads and respect for everyone that we will see more adults and children feeling safe enough to cycle as part of their everyday lives."

Organiser Alice Lyall told the BBC: "A few years ago I had a frightening fall on Princes Street when my bike wheel got trapped in the tramline.

"I was really lucky and walked away with a concussion. Since then a young woman in Edinburgh has lost her life in a similar incident, and hundreds of other people have been hurt.

"It makes me angry sometimes – it shouldn't feel this risky to get around my own city just because I'm not in a car. That's why I decided to help organise PoP this year, because our roads should be safe for all of us."

Transport Minister Humza Yousaf said: "We have invested over £217m in active travel since the start of the 2011 spending review and, as announced in the Programme for Government, we have doubled the active travel budget from around £40m to £80m a year from 2018-2019.

"We are learning from other European neighbours, such as The Netherlands, how best to build active and healthy communities, where everyone can participate and benefit from.

"Our focus will be on making our towns and cities safer and friendlier with more segregated infrastructure, where appropriate, improvements to the public realm and putting people and place before motorised vehicles.

"This will allow us to continue to build an active nation, boosting investment in walking and cycling and ensuring that as many people as possible can enjoy the environmental and health benefits of active travel."