9
10
Fantastic all-purpose light for road and gravel riding that doubles as a handy charger for your devices
Weight:
211g
Contact:
www.bob-elliot.co.uk
How we test

I never thought I'd find a worthy replacement for my fantastic Cateye Volt 1200, which has given me three years of near-faultless service. But crikey, this Ravemen PR1200 is a cracking bit of kit. It would be getting a perfect 10 if the mount was a bit better and the display told you the charge state when you're using the USB port to charge stuff. But apart from that, full marks.

Ravemen make a bunch of lights and this is their most powerful. It's solidly made, with a double LED design and integrated battery housed in a high quality anodised aluminium casing that's well-finished and waterproof. There's two buttons: one turns the light on and off and switches between mountain bike (dual beam) and road (single beam) modes, and the other adjusts the brightness. Both buttons glow in the dark, which is a nice touch. 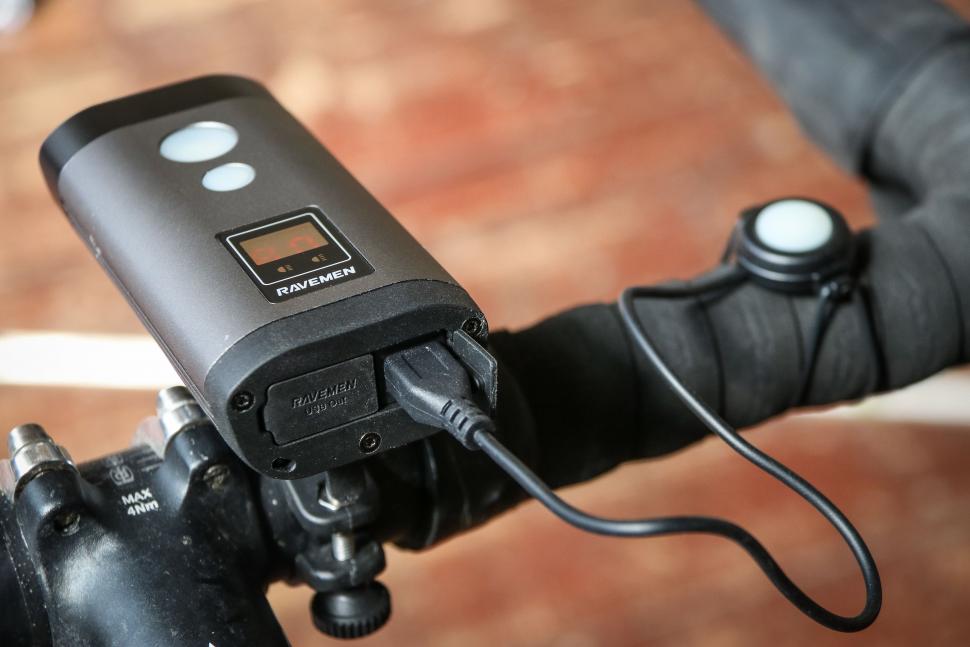 The 1,200 lumen headline brightness is only available when you're using both of the CREE XM-L2 LEDs, of which one is a high beam and one a dipped beam. A proper road friendly dipped beam. See, everyone? It's really not that hard. A simple lens change and you get a squared-off beam that's great for road use, and because nearly all of the light is going down onto the road and not into the trees, and the eyes of oncoming traffic, it feels a lot brighter than the 600 lumens that Ravemen claim. 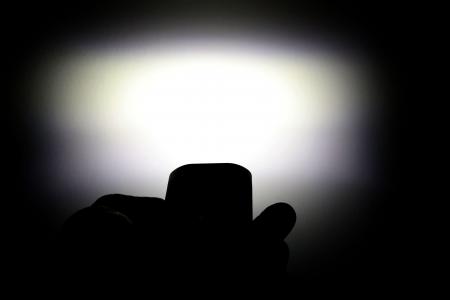 The dipped beam has a square profile 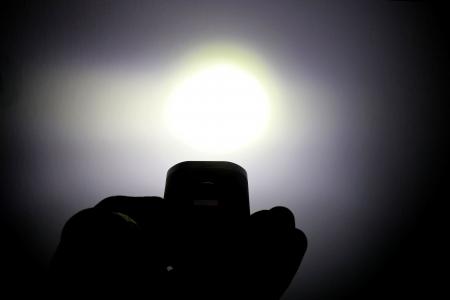 There are times when you want the full power of both beams though, and Ravemen supply the PR1200 with a remote, a sustained press of which gives it both barrels. It's useful for picking a line on fast corners in the dark, and probably would also be good for giving an eyeful to drivers who don't dip. I couldn't possibly comment. The remote plugs into the charging port on the back of the light and you can position it pretty much where you want. If I was using the PR1200 on just the one bike I'd probably run the cable under the bar tape and stick it somewhere I could access it from the drops, but it's simple to fit on top with O-rings if you're moving it between bikes. 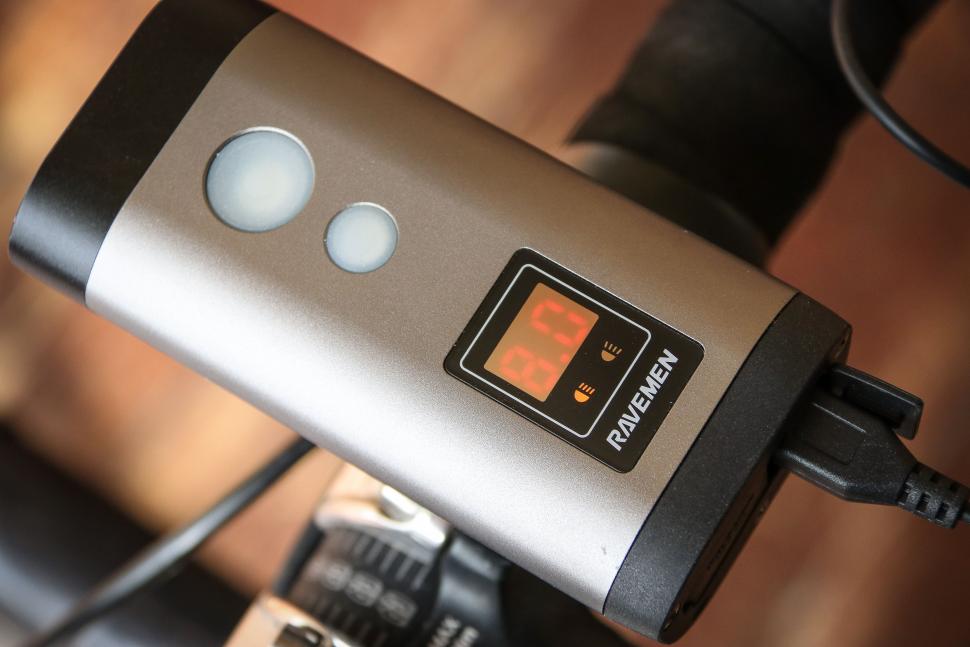 Up top there's a simple LED display that tells you what mode you're in (mountain bike or road) and how long you've got left before you're plunged into darkness. This ranges from a couple of hours in full-beam, 1,200-lumen mode to 21hrs in 100-lumen road beam. That's three nights' worth of light, and even the 100-lumen setting is enough to ride on the road at night at a useful pace because pretty much all that light is going where it's needed. The 200-lumen setting is the one you'd use for a single-night ride: 9.5 hours is what Ravemen claim, and I managed not far off that in testing. In total there are eight modes: 600, 400, 200 and 100 lumen road modes, 1,200, 600 and 300 lumen high beam modes and a 100-lumen pulse flash.

At the back, next to the charging port, is a 1.5A USB output that you can use to charge your phone/Garmin/GoPro. The battery, at 5,200mAh, is big enough to charge most phones at least twice and still leave some juice for getting you home when darkness falls. One of the issues I had with the PR1200 is that when you're charging stuff you don't really get an indication of what it's doing to the battery. On the Ball Buster Audax I successfully recharged my phone, GPS and action camera from the light, and it was only when it started flashing 'Lo' that I realised I wasn't going to have an awful lot left for finding my way home in the dark. Even then, the Ravemen still managed the half-hour trip home in the gloom in 100-lumen low mode with no issues. When you're charging, what I'd like to see is a simple battery level indicator, from 99 down to zero, so you can make a judgement about what you can use for filling up your devices and what you need to leave for night-time shenanigans. Also, the silver finish makes it hard to see in the daylight, so you need to cup your hand over it to confirm that it's charging your stuff. 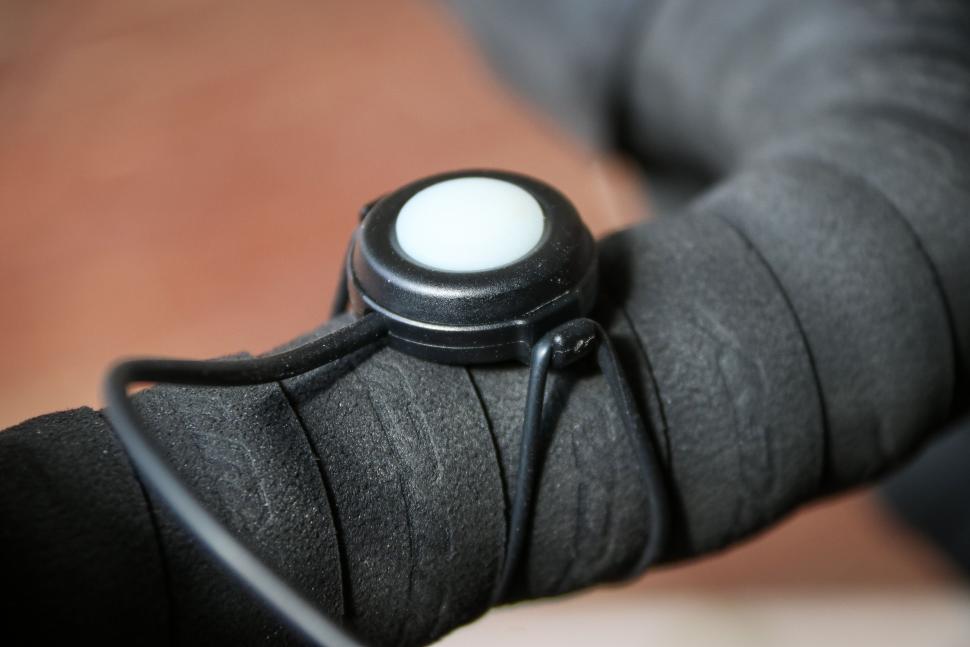 The thing that lets the PR1200 down a bit is the mount. The junction between the light and the mount isn't quite snug enough, so it rattled around a bit. If you've got a bit of Sugru lying about then a little bit in the rails of the plate will fix that: work some in to the channels on the plate, fit the mount and remove, then leave it to set. The mount swivels for correct beam placement, which is handy, but you can't really tighten it up or stop it from moving, which isn't. It generally doesn't move on its own but can it you knock it out of centre.

Update: I originally wrote that the mount can slip due to the lack of a shim, but it turns out there's an adhesive rubber strip in the box to counter that, that I'd missed.

We often bemoan lights for spoiling the ship for a ha'porth of tar, where mounts are concerned. Here I don't think the issue is scrimping on bracket quality, more that they just didn't get it quite right. It's not a deal-breaker: It can be hacked quite easily so they're not a problem. But it needs just a bit of a tweak.

Overall, I'm seriously impressed with this light. The beam pattern is nigh-on perfect for road riding, with the full beam really useful for fast nighttime fun. The fact that you can use it as a backup battery too, and the useful remote, also score highly. The LED display is really useful, although it could be more useful in charging mode. The bracket is the only weak link, and even there the problems can be fixed with a quick hack. It's not far off being the perfect light for a night ride or a weekend excursion.

8. Quick release design for easily slide in and out

Materials: The front and main body is made by aluminum with Mil Type III Hard Coat Anodizing; the rear part and the handlebar mount are made by durable plastic

Light is lovely, mount a bit less so

Pretty simple really, some mode changes are a bit fiddly

Clamp has no rubber shim on a 31.8mm bar and has to be done up really tight to not slip. You can't stop the tilt rotating side to side and the the male and female parts of the mount aren't a close enough fit.

IPX8 - you can chuck this in the pond. No issues during testing

Fairly slow on the charge but it's a big battery and you can get a full night of riding out of a charge.

Rate the light for performance:
10/10

Quite heavy but I'll take that for the build quality

Hard to beat for the money

Briilliantly, if you'll excuse the pun

The clamp, the lack of info when using the battery for charging

Would you consider buying the light? Without question

Would be a 10 if they improved the mount