7
10
Innovative and capable, it can light your way and come to the rescue
Weight:
75g
Contact:
new.fabric.cc
What the road.cc scores mean

Despite its compact size, the Fabric FL300 front light has enough bite for rides beyond city limits. There are brighter front lights for the money (or less), but its ability to convert from standard lamp to emergency front – or rear – blinkie really adds to its appeal.

At 90x23mm the FL300, with its sandblasted silver 6061 casing, occupies minimal bar space. Weighing a moderate 75g, it's unobtrusive enough for helmet use, should you fancy using it to complement more powerful bike-mounted lighting. It meets IPX5 waterproofing standards and I've had no problems with persistent, heavy rain. Sustained blasts from the garden hose haven't revealed any weaknesses either.

Behind the lens lives a single Cree LED capable of producing a claimed 300 lumens. A further four, less powerful diodes run across the top; more about these in a minute.

Charging is via micro USB and cable, and the lithium-ion battery fills up in an office-friendly two hours, although tack on another 15 or 20 minutes when sipping from a PC or laptop. During this phase, the rubberised on/off switch-cum-charge indicator pulses red and turns clear when fully juiced.

Sustained presses engage the light and determine output; it feels a little remote when wearing winter-weight gloves, but I'd sooner this than a switch that's too easily engaged. All four modes – high and medium constant, flashing and pulsing – are selected by twisting the buttery smooth knurled end. The modes are marked, but selection quickly becomes second nature.

In common with many others, the main beam pattern combines flood for an overview and presence with spot for picking out the details, so you can see hazards and theoretically ride at a smarter pace. Unleashing the full 300 lumens, I have to say I was slightly underwhelmed by its navigational clout: halos and similar imperfections made it difficult to power along shady semi-rural sections beyond 16mph, although this is still a reasonable turn of speed for commuting or training rides that take in shorter unlit sections.

> Check out our guide to the best front lights

Being seen was never a problem thanks to the cutaway lens and pure white beam of light, with most vehicles out in the sticks dipping their lights at around 50-60 metres. Pairing it with a blinkie in built-up areas, I tended to nudge down to the medium setting, closer to 150 lumens and arguably striking the best balance between output and economy. Flashing and pulsing are very distinctive, though flashing's rapid tempo has the edge, passing as a decent daylight mode.

Run-times are faithful to those quoted – I've consistently managed two hours in top, three in medium and nigh-on six in pulsing and flashing – which is handy, as you'll need to have an idea of when you might need to power down because there's no low battery warning. No dimming, it just dies. Which leads me on to...

The big selling point of the Fabric FL series is their ability to convert to blinkies in an emergency – "offering safe passage home, even when the battery is too drained to light the CREE headlamp," says Fabric – something I have been very grateful for on recent rides. If you're caught out, with a quick tweak of the bracket it mounts vertically or horizontally to accommodate seatpost, handlebar or even seatstays. Twist the selector to engage those four top diodes I mentioned earlier and you then have the option of white or red constant in full or medium, flashing or strobing, with impressive run-times. 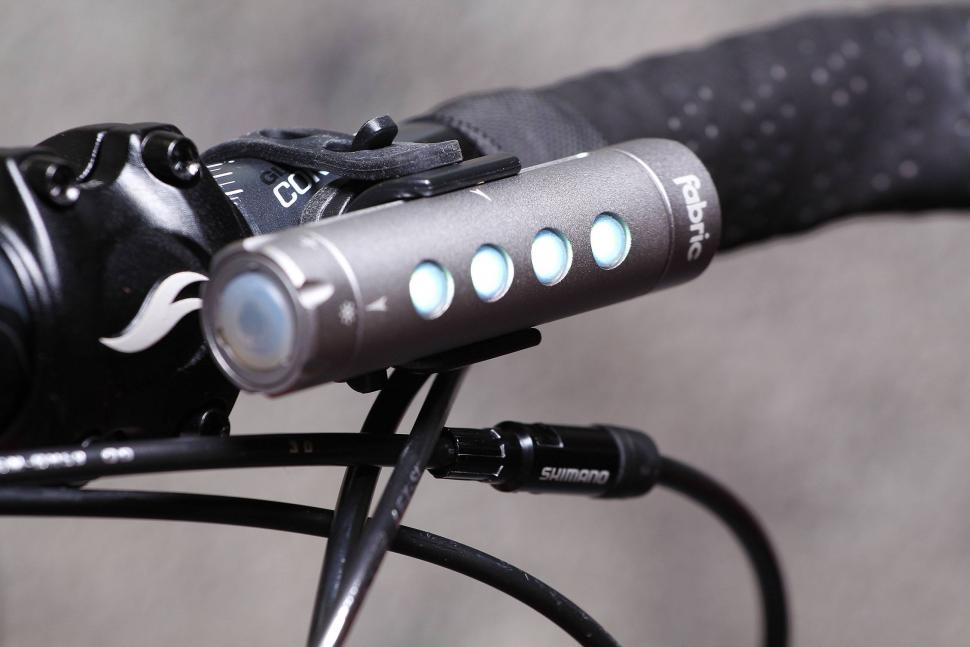 For example, for the flashing mode I initially thought the 46 hours run-time from a full charge must have been a misprint, but ours has come pretty damn close. Strobing is even more frugal – Fabric says 58 hours. I've not hit that point yet, but on the basis of others (within 8 minutes of the 6 and 14 hours quoted for full and medium), I'm confident it won't be far off.

Used in this emergency mode, flashing was my default and as a white light, though lacking the main front's bite, seemed to keep me on people's radars when entering the flow of traffic, or performing right turns in town. The steady settings aren't bad, but when mounted horizontally the peripheral bite is relatively impotent.

Red seems more captivating, being visible from 100 metres or so, even on relatively murky evenings. Medium seems around the 12-15 lumen mark and has economy in its favour, although presence wasn't comparable with Cateye's Rapid Micro Rear. Ultimately, there are relatively few compromises here. The FL300 is not only extremely versatile and, for the time being, unique, but genuinely effective – whichever way it's used. The main light doesn't produce quite the same quality of output compared with the Blackburn Central 300 I tested last year, and our beam comparison engine (see below) also suggests a few others that are both brighter and cheaper – though not as versatile.

If you're in the market for a compact light that can transform into an emergency system in a matter of seconds and is still bright enough for tackling semi-lit rural sections, the FL300 is well worth closer scrutiny.

Innovative and capable, it can light your way and come to the rescue

Fabric says: "The FL300 is made from high-quality materials and components. It casts a 300-lumen beam from its CREE headlamp for two hours, and doubles as a 'home safe' option, courtesy of four LEDS mounted in the sandblasted aluminium body. Micro USB-charging."

I'd describe it as an extremely versatile compact light with enough bite for riding beyond city limits.

Simple and dependable in all contexts.

IPX5 should be more than adequate for most road riders.

It's not the brightest for the money, but taking its emergency role into account, it performs competently overall.

There are cheaper and brighter, if less versatile, options.

As a compact light for longer commutes/training rides that encompass unlit, semi-rural sections, the Fabric FL300 has a lot to offer. Its ability to transform from main front light to decent safety in emergencies, or during the day, is a distinct boon.

Innovative design and works well in all settings.

Quality of output wasn't quite on par with some others boasting comparable lumens and/or lower pricetags. An automatic failsafe to SOS when reserves become critical would be welcomed.

It's a clever compact light, though quality of output in the highest mode lags slightly behind several similarly powerful competitors. As a main front light only I would score it 6, but its ability to work as an emergency/day light too lifts its versatility and score to 7. 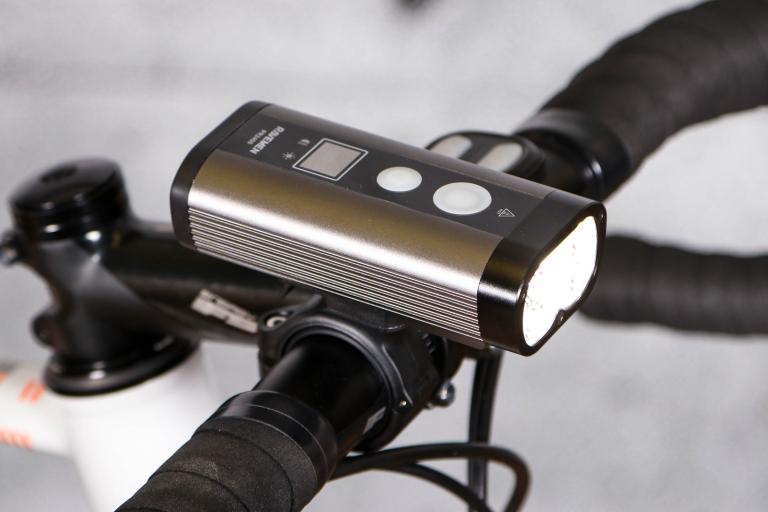 Delivers for both on and off roading thanks to high outputs, great battery life and brillant beam patterns 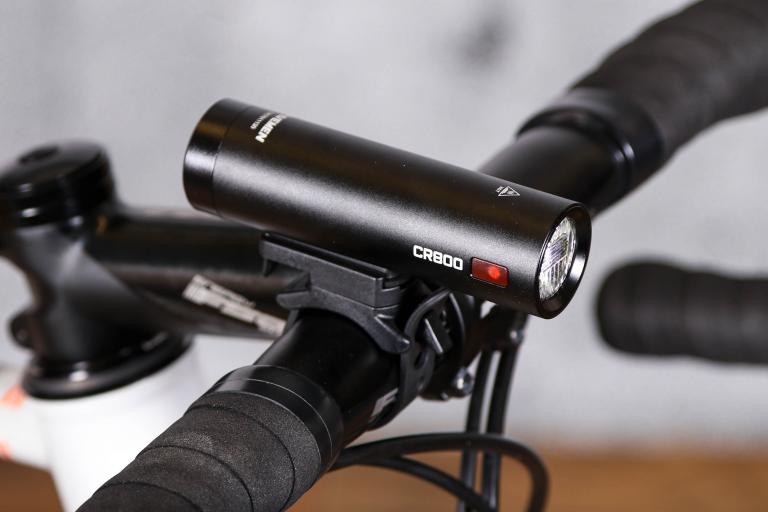 Not the cheapest for its power, but the smart beam pattern makes the most of the lumens on offer