8
10
Solid performance across the board, with braking the highlight. A very good mid-range groupset
Weight:
2,970g
Contact:
www.sram.com

SRAM's Rival 22 hydraulic groupset is the lowest tier of its road disc line-up, but for many it'll be the ideal combination of performance and price to fit to an all-purpose bike. The shifting is precise, if a little heavy, and the braking offers great modulation and plenty of power for very little effort. Overall weight is decent and at RRP it stacks up well against the opposition, although the discounts available for rim-brake groupsets at the moment – and the cost compared with a standard Rival 22 setup – do weigh against it. 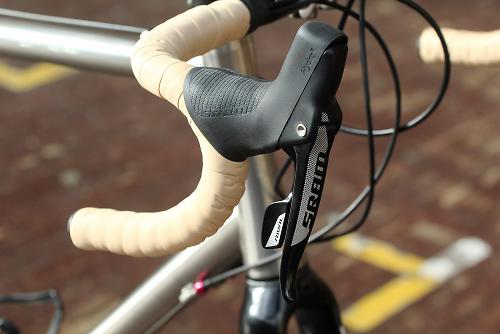 Levers: chunky but easy to use

The main thing to talk about here is the levers and the brakes. They're sold per wheel; you can choose to have them plumbed 'moto' in the UK configuration (front brake on the right shifter) or the other way round if you prefer. They come pre-bled, with plenty of hose. If you're running a small frame then you'll probably need to cut them down; I was fitting them to a 60cm Kinesis Tripster ATR and still had a bit of hose to spare, though not enough to bother trimming. They're big units, the levers. They were originally even bigger, but when SRAM recalled the first incarnation of its hydraulic levers (a recall that ran to nearly 20,000 units) after problems with sealing in cold weather, the company also took the opportunity to redesign the hood shape, and the Rival shifters share the shape of the more expensive Force and Red units. The front of the lever is a fair bit taller than a normal mechanical lever from any of the major three manufacturers, and bigger too than Shimano's hydraulic/mechanical RS685 levers that Dave Arthur was full of praise for when he tried them on Cannondale's Synapse Disc bike last year. I have big hands. Like, really big. And personally I like the feel of the Rival shifters. The hand position for riding on the hoods is spacious and comfy, and if you're hunkering down on a climb (or into the wind) the high hood top is easy to grab. If you're smaller of palm than me then it's possible that you'll find the lever a bit bulky; certainly in terms of the circumference of the hood, which is noticeably bigger than, say, the latest Ultegra shifters.

Rival, like all of SRAM's road groupsets, uses DoubleTap shifting. There's one lever behind the brake lever that accounts for both up and down shifts: click it to shift down (one sprocket at a time) or push it further to shift up (up to three at the back in one go). It works very well and it's easy to get used to. Compared with Force and Red (and possibly even the standard Rival 22 levers, I haven't used those) the lever action is reasonably heavy, although shifting is still very accurate and missed shifts were rare. One of the benefits of the DoubleTap system is that the shift lever is articulated separately from the brake, meaning that you can pull it back (without braking) and use it to shift. That means that from the drops you can keep the lever within reach and shift up or down easily. Of all the major groupsets, it's the easiest to use from the drops. It's also possible to move the shift paddle backwards (via an adjustment screw) so that it doesn't sit flush behind the brake lever. That's my preferred position now, as it's both easier to use from the drops and also better if you're wearing big gloves. SRAM's Yaw system adjusts the angle of the front mech between chainrings to eliminate chain rub, meaning you only need one position for each ring to work with all 11 sprockets; there are no trim clicks. It's a bit of a fiddle to set up, but once you have it dialled in it works perfectly, and I didn't have any derailleur rub at the front even when I was crossing the chain on purpose. (The clue's in the name – it's designed so all 22 gear combinations are possible.) I've had a few issues with the levers getting a bit sticky and being sluggish to return to the neutral position, mostly on the front shifts. A bit of lube in the pivot solves it. 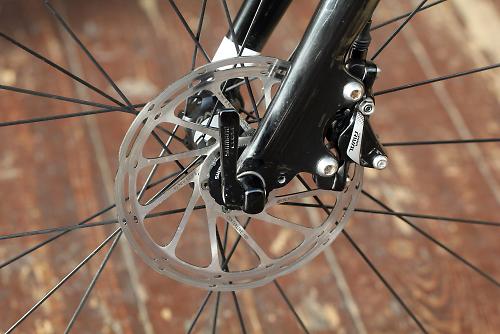 Braking performance is really good: predictable, with lots of power on tap for very little force at the lever. Compared with Shimano's hydraulic road brakes the overall experience is very similar; Shimano's units feel a bit more powerful overall but the SRAM brakes are a bit more progressive through their range of power, so it's swings and roundabouts. If I had to choose one or the other that I liked using most, the SRAM brakes would probably edge it. They're a bit more keen to squeak when they get wet, but in my experience there's less rotor rub after heating the discs up on a long descent. I've had a good old go at trying to heat the brakes and make them fade on long descents, with very limited success. Dragging the rear brake on a two-mile descent until the rotor was blue made the calliper grumble a bit and the pads cooked a little, but it didn't take long to take the shine off them again. There was a bit of fade on the steep bottom section of the hill but I had a cold front brake to use as well. Trying to cook both brakes at the same time was impossible: if you're generating enough heat to affect the system then you'll be at a standstill in no time. I was using SRAM's 160mm rotors for most of testing, although I swapped between Tektro and Shimano rotors too with no issues. 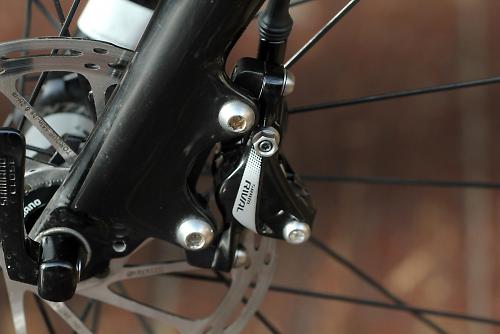 Bleeding the SRAM brakes is a bit more of an involved process than Shimano's brakes. This video shows you how to do it. The system uses silicone-based DOT 5.1 fluid which isn't especially kind to skin and paintwork, so you need to be a bit more careful than you do with the more inert mineral oil. Having said that, the only reason I've bled the system at all in half a year of use is so that I could say I had; they didn't need doing. I'm still on the original pads, although they're just about due a change now.

I was using a semi-compact 52/36 chainset and an 11-32 cassette, which is now my stock choice for everything other than racing. It's a big range of gears that's not wanting at either end, and the 11th sprocket closes up the gaps nicely. The 52/36 uses a 110mm bolt circle diameter which means you can swap out rings if you want: 50 and 46-tooth outer rings are also available, and there's a 34t inner as well. It's an all-alloy unit as opposed to the Force chainset with its carbon spider and crank, so it's a bit heavier. I had no issues with derailleur rub under power which suggests it's nice and stiff; I was using the GXP bottom bracket version of the chainset. 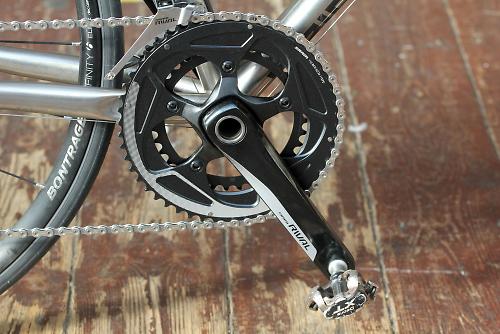 Both derailleurs have performed perfectly with no need for anything other than the odd clean. I've been using the mid-cage WiFli rear derailleur to cope with the 32t sprocket of the wide-range cassette; the longer cage didn't seem to affect the shifting performance at all, which was crisp throughout. The front mech comes bundled with a chain catcher to stop you losing your chain between chainset and frame. It was easy to set up and did the job admirably. 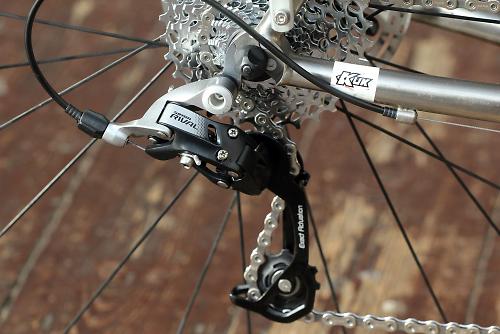 The chainrings and cassette are both starting to show signs of wear now, but I'm a fair way away from wanting to swap the chain out. The groupset has covered around 4,000km. I think. Some of that has been in conditions best described as 'adverse'. The performance of the groupset when it's been covered in filth from the back lanes and trails has generally been excellent. Rival 22 is an excellent choice for bikes that get a lot of use. It's been very reliable, with excellent braking and good shifting performance throughout. The hydraulic levers look bulky, but ergonomically they're easy to use and comfortable (with a caveat if you have really small hands), and the rest of the Rival system is all solidly made and wearing well through the months of testing.

Solid performance across the board, with braking the highlight. A very good mid-range groupset

The new SRAM Rival 22 groupset delivers immense performance across a broad variety of bikes and disciplines. Paved or not. Cyclocross or triathlon. Road racing or unchartered journeys. Rival 22 provides the ergonomics, efficiency and technology for finely tuned cyclists to meet each challenge and expand their limits.

Dedicated cyclists' demands are different – not less than – the pro's. Their demands change and evolve with their riding and performance, whether they're race ready or adventure ready. So why settle for a group that's simply ratcheted-down to 75 percent of what the pros ride? Rival 22 delivers 100 percent of what cyclists demand.

4000km in and still going strong on the original chain.

Good for the money, but not a lightweight option.

I found it very comfortable with my big hands, but the large lever may put others off.

Good value at RRP, harder to find at a discount than non-disc groupsets.

The braking performance is excellent.

Some issues with levers getting a bit sticky. 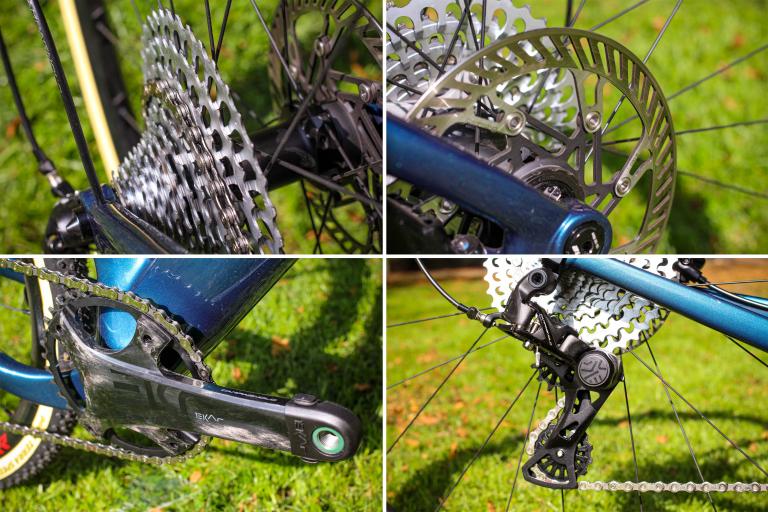 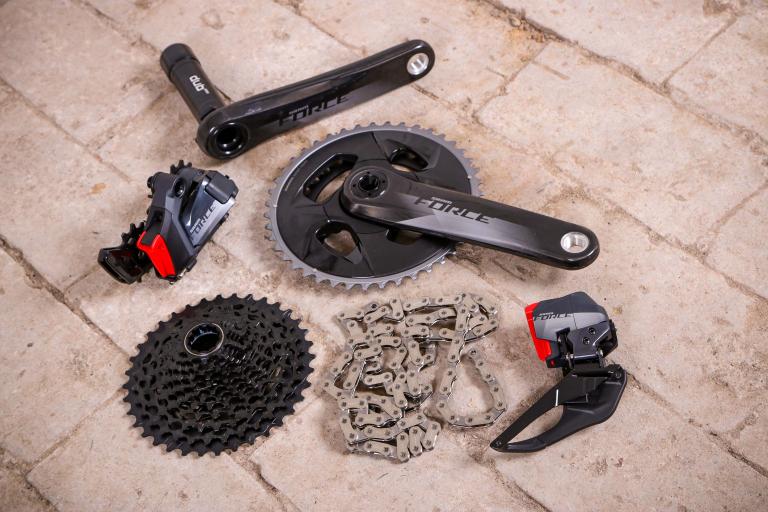 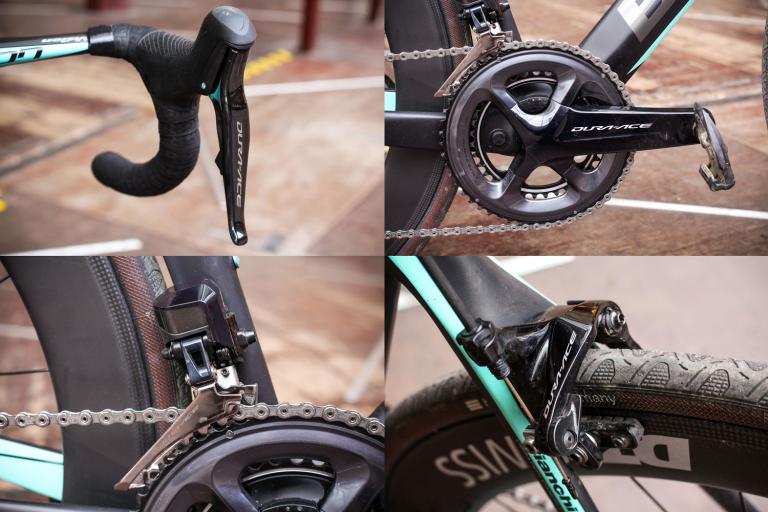 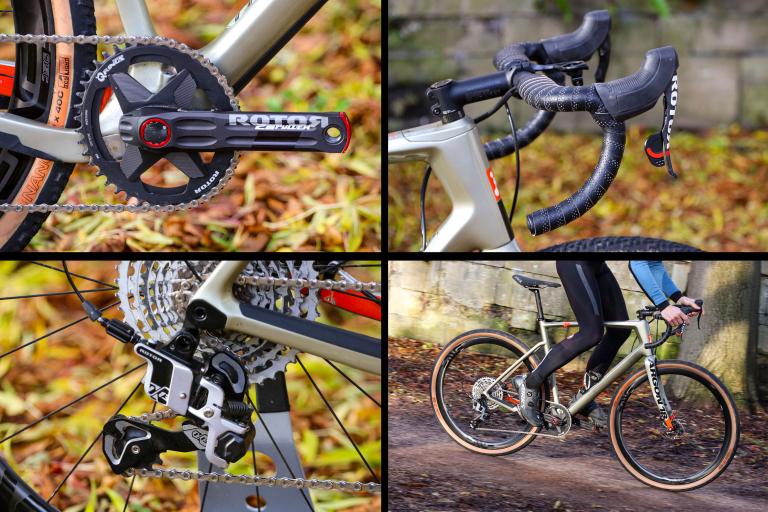