There has been much anticipation surrounding Shimano’s latest ST-RS685 hydraulic disc brake levers with mechanical shifters ever since they announced them earlier this year. We’ve had to wait ages to get our hands on a set, so when the new Cannondale Synapse Disc rolled into the office recently sporting the new brakes, we rubbed our hands together in delight.

The reason this groupset has been so eagerly anticipated (and in much demand) is because it makes disc brakes a more affordable reality, both for manufacturers speccing new bikes and customers building their own bikes. Previously you’d had to buy a Shimano Di2 groupset to take advantage of their new hydraulic disc brakes, but now Shimano are offering a hydraulic brake lever with mechanical shifters, we’re going to start seeing Shimano disc-equipped bikes coming in at much lower prices. This Synapse by way of an example, costs £2,500, massively cheaper than the Di2 disc-equipped bikes we've tested so far this year. 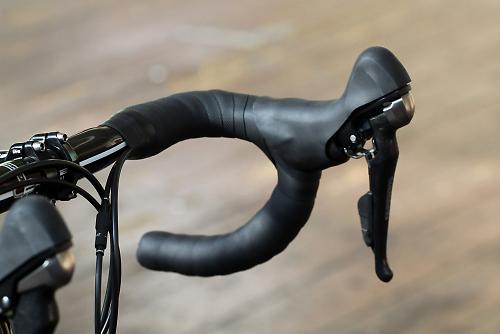 The new RS685 STI levers operate the new BR-RS785 brake calliper, essentially it’s the same as the first generation R785, but the brake hose uses a direct hose connection which goes straight to the top of the caliper. The disc rotors on this bike are Shimano recommended 140mm front and rear IceTech rotors, with the distinctive finned design and a three-layer sandwich structure of stainless steel and aluminium helping to dissipate heat.

The brake lever and calliper are non-series, it’s designed to be run with any of Shimano’s 11-speed mechanical groupsets, so that’s Dura-Ace, Ultegra and now, 105. That immediately opens up a raft of build options, the levers and calipers cost £479.99 and 105 is £600, but you can get it much cheaper than that if you shop around. 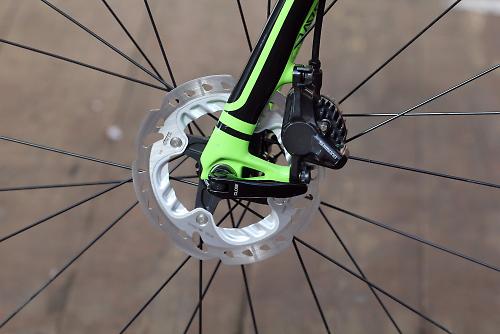 I've' spent the past couple of weeks riding the new brakes, and I have to admit, I’m really taken with them. I’m already a fan of disc brakes, but I’m certainly not pushing for their adoption, I just recognise that they offer superior braking performance with far improved lever feel, and that really appeals to me. I also don’t mind the look of disc brakes on road bikes, but that may be because I’ve been riding mountain bikes since before disc brakes were common and I’m sort of used to their aesthetic. I also feel that the disc Synapse is a cleaner looking bike than the rim brake model we tested last year. You might not agree of course, and that’s just fine.

Looks aside, the most important thing is the performance, and in that respect the brakes and shifters are faultless. To glance at, the lever looks like any regular Shimano mechanical lever, and when you first clasp your hand around the hood it feels almost identical. Look a bit closer and you can see that Shimano have lengthened the STI, but kept the width and height about the same. It's a minute change, but enough that is has allowed them to squeeze an oil reservoir inside, along with the mechanical shift components. It must be cosy in there. It’s a typically smart bit of design from the Japanese company. 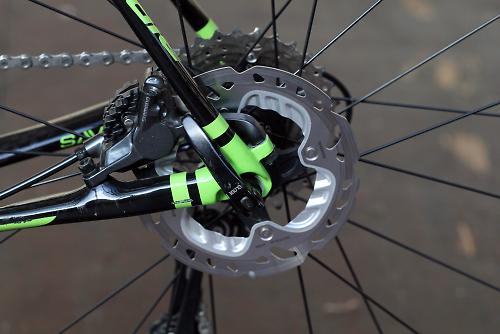 Riding the bike and flicking the shift levers feels just like any other bike equipped with a Shimano mechanical groupset. Pull the brake lever though, and it’s a world of difference. The brakes are powerful, strong and, really they just feel fantastic. The amount of lever travel is just right, they’re easy to operate from the hoods, from the drops you can use one finger all of the time, even when you’re panic braking because a car has pulled out in front of you.

I’ve been riding the brakes in loads of weather, purposefully heading out in the rain (it's a tough job sometimes) and on roads covered in crap (which most of the Cotswolds lanes appear to be at this time of year) and up and down the steepest hills. The nice thing is that the lever feels the same, all the time. In any weather. You can splash through puddles and ride through mud, caking the rim, but the disc brakes will give you the same predictable braking performance. 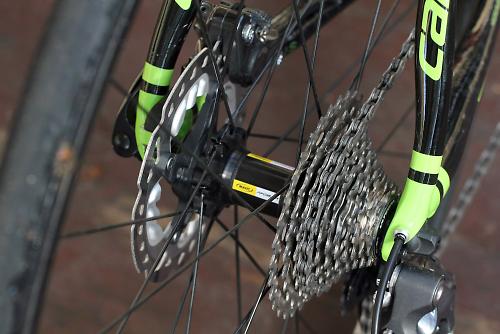 I’ve been in situations on steep descents on rim brakes when I’ve had scary “will I be able to stop” moments. That's not the case with these brakes. That provides a huge amount of confidence that the brakes will deliver when you really need them to. There's also none of that scraping and scrunching side from a rim brake, as the brake blocks first try and clear mud and water from the rim before finding enough purchase to slow you down.

There’s not been one occasion when I wished to be back on a traditional bike. Even lugging their slight weight penalty up hills. They just work, all of the time. No ifs or buts, just brilliant performance.

I’ve had a lot of people asking me if the brakes are too powerful and if I’ve been constantly locking wheels. No is the simple answer. You can easily lock the wheels if you grab a load of brake lever very suddenly, but that is the same of any well setup braking system, rim callipers included. It’s a bit like when you get in hire car, and the first time you go for the brakes the bite point and lever travel is completely different to the car you’re used to, usually resulting in a bit of a comical jerk at the exit of the car hire car park. Once you’ve made that first mistake, you don’t tend to make it again. Riding hydraulic disc brakes is a bit like that, in that it takes a little while to get used to riding them, but once you do, it’s very hard to go back to a bike without disc brakes.

With this new groupset, widespread disc brake adoption just took a serious leap forwards - disc brakes are here to stay. Yes it’s still expensive technology at the moment, but this groupset is a definite step in the right direction and makes them that bit more affordable.

A pair of RS685 shifters and calipers cost £479.99 and should be available from Shimano distributor Madison now.