A woman has been charged in connection with carrying an insecure load in relation to an incident in September in which a bicycle crashed into the windscreen of a car on a motorway in Scotland in September.

The incident happened between junctions 1 and 2 – respectively, the exits for Edinburgh Airport and the Forth Road Bridge – of the M9 in West Lothian at around 1750 hours on 3 September.

The driver of the vehicle that was hit by the blue and white Kona Kula 2-9 hardtail mountain bike was taken to hospital for treatment for minor injuries, with Police Scotland saying that was “pure luck” that she was not more seriously hurt.

Yesterday, police confirmed that a 52-year-old woman had been charged in connection with an insecure load, with a report submitted to the Procurator Fiscal, which investigates and prosecutes criminal cases in Scotland.

When the incident happened in September, Police Scotland said it was believed that the bike had somehow come loose from a car being driven on the opposite carriageway of the motorway, which links Edinburgh and Stirling.

Photographs released by police showed how the bike’s handlebar’s had smashed through the windscreen on the driver’s side of the vehicle, with its wheel shown sticking out of a hole in the glass. 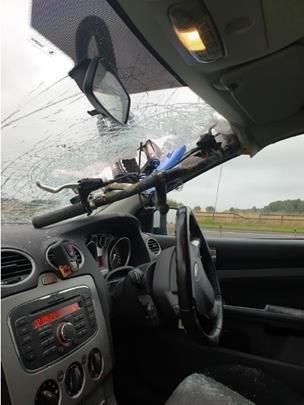 Luckily, the driver of the car struck by the bicycle, a white Ford Focus, had been able to bring her vehicle safely to a stop on the hard shoulder.

At the time, Sergeant Jennifer Forbes, of Police Scotland’s road policing unit, said: “The consequences of this incident could have been far more severe and is only through pure luck that nobody was more seriously injured or worse.

“It should stand as a stark reminder of the importance of making sure that any load being carried out on your vehicle is properly and thoroughly secured,” she added.

The officer also issued an appeal for information to anyone who may have witnessed the incident or who had dashboard footage taken on the motorway at the time and date it happened.