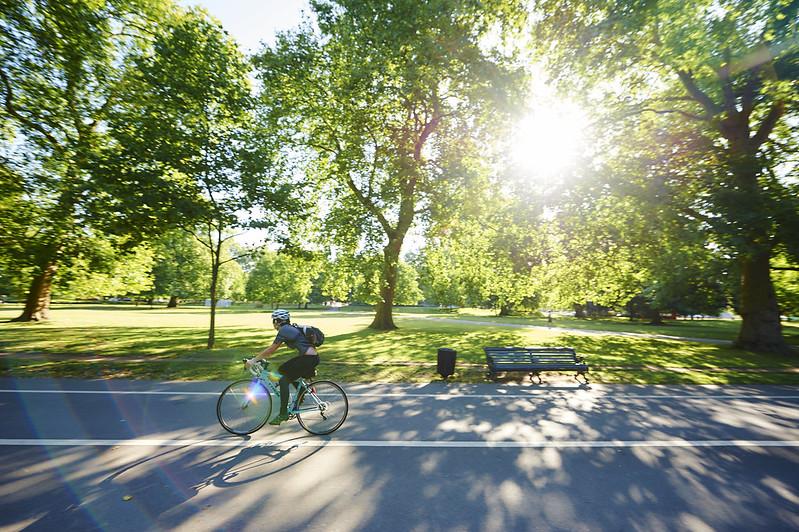 Updated: Health secretary says no plans to ban cycling and other exercise - after suggesting earlier that it might be

Matt Hancock says "the current rules must be followed"...
by Simon_MacMichael

Updated: Health secretary Matt Hancock has said this evening that the government is not looking at stopping people from exercising outdoors – having suggested this morning that it would do just that due to people ignoring government advice on staying at home and social distancing.

Delivering the government’s daily update on the coronavirus pandemic, Hancock said that there were no plans to toughen up restrictions on people exercising outdoors, reports the Guardian.

“What we are doing is being absolutely clear that the current rules must be followed,” he explained.

Dr Jenny Harries, the government’s deputy chief medical officer, added: “It is not just what you are doing but how you are doing it.

“If you are sitting on a park bench, people tend to accumulate - it is very difficult to prevent that.

“Having rules where we are getting all of the benefits and minimising the risks and harms is an important approach to maintain.

“We have set those rules, we are enforcing against those rules and we will reiterate those rules, because that is the best way to be able to bend the curve down and stop the spread of the virus.”

Earlier today, Hancock had suggested that people’s right to exercise outdoors during the coronavirus pandemic may be ended if government rules are not followed, saying it was “quite unbelievable” how some people ignored official guidelines yesterday to sunbathe in parks.

Under current regulations aimed at containing the spread of COVID-19, people are allowed to leave their homes to undertake one form of exercise, including cycling, each day, provided it is done alone or with household members.

Other exceptions to the government guidelines to stay at home are to undertake essential shopping trips, to care for a vulnerable person, or to travel to and from work if it cannot be undertaken from home.

Speaking to the BBC’s Andrew Marr this morning, Hancock said: “If you don't want us to take the step to ban exercise of all forms outside the home, you have got to follow the rules.

“Let's not have a minority spoiling it for everybody.”

He acknowledged the “really important” physical and mental health benefits of exercise and said that the government did not want to take away the opportunity for people to undertake it outside the home.

However, he added: “If the result of that is that too many people go out and flout the other rules because they say, ‘Well, I can exercise then it’s fine for me to do other things’ then I’m afraid we will have to take action.

It was a point he also made on Sky News today in an interview with Sophy Ridge.

Hancock added: “We are crystal clear in the guidance what people should or shouldn't do," he stressed.

“This is not a request, it's a requirement. People need to follow it.”

On Friday, Prime Minister Boris Johnson urged people to avoid the temptation to ignore lockdown restrictions ahead of what is proving to be a warm and sunny weekend across much of the country.

He said today: “Thank you to everyone who is saving lives by staying at home this weekend.

“I know it's tough, but if we all work together and follow the guidance, we will beat coronavirus.”

> How much distance should you leave to the cyclist ahead in a time of pandemic?

Pictures emerged in the press and on social media yesterday of police speaking to people who were sunbathing in locations including South London’s Greenwich Park and Brockwell Park.

The latter, located close to Herne Hill Velodrome, confirmed yesterday that it will now be closed to the public after an estimated 3,000 people visited the park yesterday.

Meanwhile, police in East London broke up an 18th birthday party attended by 25 people, while in Brighton, two people have been summonsed for taking part in a barbecue on the beach.

However, there has been criticism of some of the images used by certain newspapers in an attempt to highlighting apparent disregard for social distancing rules.

Yesterday, we reported on how an image used by Mail Online of cyclists apparently riding in a group in London’s Regent’s Park was misleading – and perhaps deliberately so.

Taken from the front using a telephoto lens, foreshortening meant that the riders in the picture appeared much closer together than they actually were.

Regent’s Park Cyclists, which represents riders who use the park, retweeted a picture of the image together including the caption that Mail Online had given it.

That same picture was published online by The Sun, for example, with its caption claiming that it showed the cyclists “huddled together.”

However, Regents Park Cyclists said yesterday that “the vast, vast majority” of cyclists had been “extremely respectful” of requests by the Royal Parks and the police to ride responsibly and follow social distancing guidelines.

> Updated: How to cycle responsibly in a time of pandemic

Please note: This story was originally published at 11:57am on Sunday 5 April 2020 and udated at 9:30pm the same day to reflect Matt Hancock's comments in the evening press conference.