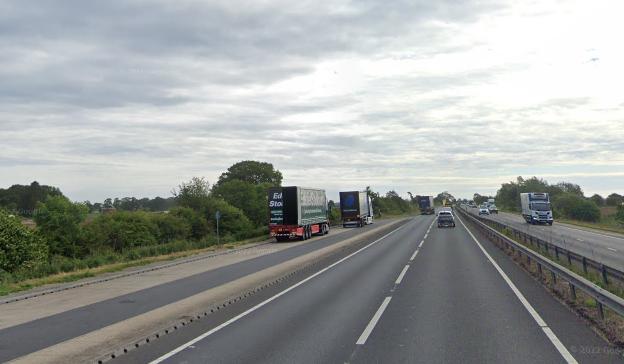 A11 near Roudham (Google Maps)

Cyclist killed after being struck by van driver during time trial

The tragic incident occurred on Sunday morning on the A11 in Norfolk, during CC Breckland’s 50-mile East District championship
by Ryan Mallon

A 52-year-old cyclist was killed on Sunday morning after being struck by a van driver while competing in the East District 50-mile time trial championship.

Cheryl Tye, a keen triathlete and cyclist, and member of Plomesgate Cycling Club, was taking part in the CC Breckland-organised event on the A11 in Norfolk, between Croxton and Eccles, when she was reportedly hit from behind by the driver of a Citroen Dispatch van.

Emergency services, including an air ambulance, were called to Roudham at around 9.40am on Sunday, but the 52-year-old was pronounced dead at the scene.

A former member of the Royal Air Force and manager of Hadleigh Town Council in Suffolk, Tye was praised by her former council colleagues, who described her as “a dynamic and determined person and unmistakably from Yorkshire”.

“Her death is a terrible tragedy, and the only comfort I can find in it is that it happened while she was doing the thing she loved best, competing,” said former Hadleigh mayor Frank Minns.

Cheryl’s husband Chris, who was also taking part in Sunday’s time trial, paid tribute to his wife on social media, writing: “She loved doing triathlons and all sport, gardening and looking after four gerbils.

“She touched everyone she came across in a positive way and will be sorely missed. She was my soulmate, a beautiful spirit and I loved the time I had with her.”

The A11 dual carriageway in Norfolk, while a popular time trialling venue for local clubs, has witnessed a number of collisions involving racers and drivers in recent years.

In 2010, Will Dorset was airlifted to hospital with a suspected broken vertebrae following a collision 175 miles into his 12 hour time trial on the road.

Less than a year ago, we reported that a female cyclist was seriously injured after being hit by a van driver from behind during a time trial on the section of the A11 between Snetterton and Shropham.

Norfolk Constabulary have asked anyone with information or dashcam footage related to Sunday’s tragic incident to contact the Norfolk Serious Collision Investigation Unit by email at SCIU [at] norfolk.police.uk or by ringing 101 and quoting incident number 119 of 26/06/2022.