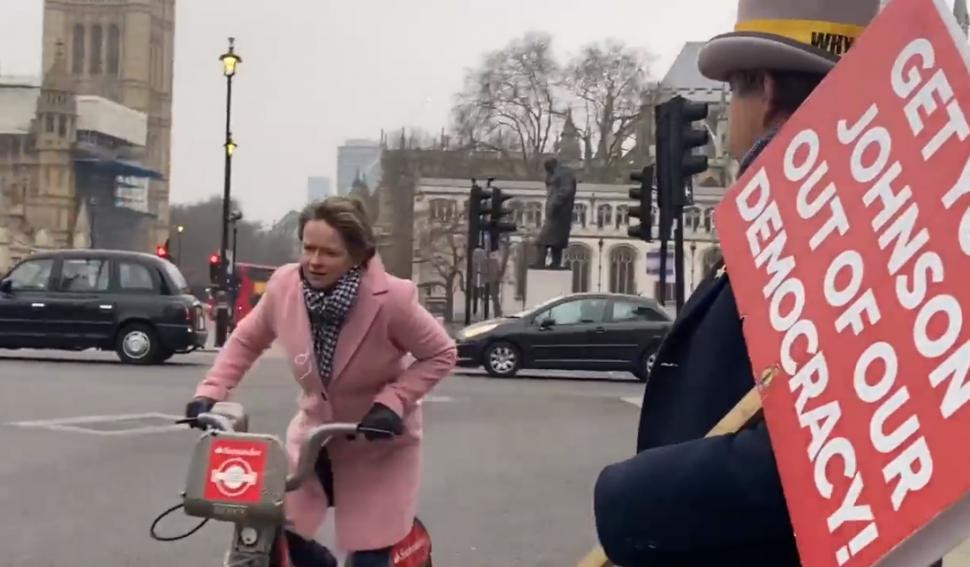 Dido Harding has been filmed sprinting up Whitehall on a Boris Bike* as a protester tried to quiz her over the £37 billion track and trace spend, with the Tory peer putting in a performance worthy of former Olympic champion Victoria Pendleton as she sped away from traffic lights.

Harding, a life peer since 2014 and appointed in May 2020 to oversee what was then called the track, test and trace programme by then health secretary Matt Hancock, was waiting at a traffic light at the junction of Parliament Square with Whitehall when she was spotted by Steve ‘Mr Stop Brexit’ Bray.

A coin dealer from Port Talbot, south Wales, Bray sprang to fame in the wake of the 2016 referendum on the UK’s membership of the EU and in the past few years has regularly appeared on TV news programmes photo-bombing reporters and the politicians they are interviewing outside Parliament.

I’ve never seen anyone move so fast on a Boris bike in my life… earlier today I tried to ask Dido Harding about £37,000,000,000 Test & Trace and where the money had gone. pic.twitter.com/eLeaRKjsIF

Running across Whitehall, Bray – who has continued his protests outside the Palace of Westminster and Downing Street despite the UK leaving the EU – asked Harding, “What happened to the £37 billion?” that the government set aside for the test and trace programme.

Harding ignored him as she headed towards the Cenotaph with Bray shouting, “Where’s the £37 billion gone?” before adding a parting shot of “On your bike!”

It’s not just the ability to pedal up to speed quickly from a standing start that Harding and Pendleton have in common – both have raced as amateur jockeys.

Pendleton finished a very creditable fifth in the Foxhunters’ Chase at the Cheltenham Festival in 2016 despite first taking to horseback the previous year, while Harding – who sits on the main board of the Jockey Club – was runner-up in the 1996 running of the same race riding her own horse, Cool Dawn, which went on to win the Cheltenham Gold Cup two years later.

*Regular readers will know that we usually use the term Santander Cycles, the scheme’s current sponsor – although in this specific case it seems entirely appropriate to reference the [checks Guardian Politics Live in case we missed any news in the past hour or so] current Prime Minister, who as Mayor of London introduced the bikes in 2011, leading to them gaining their popular nickname.