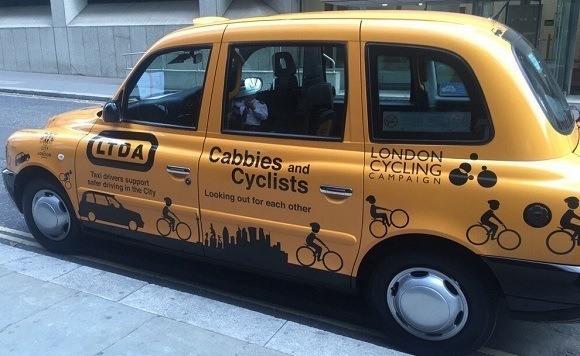 LTDA cab looking out for cyclists

Two taxi groups have together submitted legal papers challenging Streetspace for London – the emergency measures that are being introduced in the capital to encourage walking and cycling.

Pop-up cycle lanes, car-free zones and wider pavements are among the changes currently being made under the Streetspace banner to try and make it easier for people to walk and cycle and maintain social distancing.

The Licensed Taxi Drivers’ Association (LTDA) and United Trade Action Group (UTAG) is challenging both the Mayor of London and Transport for London (TfL) over the plans and also over the Bishopsgate Bus Gate scheme that excludes black cabs during peak times.

In an email to their mailing list, UTAG said: "Our QC, Barrister and Instructing Solicitor have worked ceaselessly to prepare a compelling legal challenge against the plan and the impact it would have on us, and more importantly our passengers, who depend on our service.

"We cannot divulge the legal arguments cited in this [Judicial Review] but can say they are forceful, apposite and well considered.

"When the Respondents; Transport for London & The Mayor have had time to digest our challenge we may be able to give you more information but must be guided by our expert legal team."

The LTDA’s General Secretary Steve McNamara has previously described the allocation of safe space for cycling as the capital emerges from lockdown as "a class war".

Responding to the comments, London Cycling Campaign's Simon Munk said: "In short, this is the usual soundbite silliness from McNamara. Not really fitting, particularly in a global pandemic which appears to be exacerbated by pollution."

Munk has previously criticised McNamara for claiming he doesn’t oppose cycle infrastructure at the same time as protesting almost every single major route that is proposed.

Speaking about the legal challenge, McNamara said: “The biggest single threat to our long-term future and financial wellbeing is anything that limits or restricts our ability to move around and take our customers where they want to go, by the shortest, quickest and most direct route.

“Throughout the current crisis we have tried every possible way to work with TfL, the Mayor and the various local authorities to ensure and protect our access."

He added: “The only option now available to us is to challenge TfL, over our exclusion, in the High Court. This is a very expensive and complicated exercise, and despite all the trade groups being asked to contribute to this crucial challenge only the LTDA and UTAG will be funding the action.”