An agent who has represented Sir Ian McKellen and Colin Firth is this week in court accused of dangerous driving and common assault over an incident which saw road safety campaigner CyclingMikey carried on the bonnet of a Range Rover.

Paul Lyon-Maris is accused of driving into CyclingMikey, real name Mike van Erp, during a stand-off at the infamous junction in Regent's Park, dubbed 'Gandalf Corner' due to Mikey's McKellen-like 'you shall not pass' interceptions of drivers using the wrong side of the road to cut the corner.

During the footage the cyclist can reportedly be heard asking: "Why are you driving into me?"

According to prosecutor James Dean, Mr Lyon-Maris, 60, is then heard starting "to remonstrate in a very agitated manner", saying he has "an appointment at 8.30am" before telling Mr Van Erp to "get out of the way".

The prosecutor continued to describe the footage, explaining that Mr Van Erp is seen falling onto the bonnet twice as the driver moves the vehicle towards him.

"The car continued, still on the wrong side of the road, towards the junction and turned right on the outer circle where it stopped around 20 yards (18m) to the left with Mr Van Erp on the bonnet," the prosecutor said.

Mr Lyon-Maris admits driving around the right-hand side of the keep left sign but claims Mr Van Erp "threw himself on my bonnet".

"The defendant simply lost his temper and did an act no reasonable driver would've done," Mr Dean told the court.

> "How would you like to be on camera now?" Shirtless driver accosts CyclingMikey

"He claims he was looking for a parking space when in fact he was in a rush to get to a physiotherapy appointment and felt entitled, in these circumstances, to break the law, then escalate that offence in the way that he did."

The court heard Mikey had intercepted two previous vehicles earlier in the day, actions he accepted were "risky", but comparable to "taking the keys off a drink-driver".

"I want to stop the immediate harm," Mr Van Erp told the court. "I'm told I don't look very afraid, but I can assure you there was a lot of fear on the inside."

"I did not move forward towards the Range Rover. I remember going down in the manner of a crash test dummy. I remember thinking 'dear god, I hope he doesn't speed off down Outer Circle afterwards with me still in the bonnet'."

Mr Lyon-Maris says he drove with Mr Van Erp on his Range Rover's bonnet "very slowly to move forward and out of the way of traffic".

"I didn't know who he was, what he was trying to do," Mr Lyon-Maris told the court. "Being met with this rather intimidating figure, I came up with something I thought might calm the situation and I said I'm on my way to a doctor's appointment.

"I said it specifically because I thought it was a calming thing to say to someone you don't know who has stepped out in front of you, waving their arms around and holding a stick.

"He then, with his stick, banged it down on the windscreen. At which point I said 'what the hell? What's going on. What are you doing?'

"Before I knew it, he was on my bonnet. He fell on it, jumped on it, he was suddenly on it. His body moved forward, hit my car, and his stick hit your windscreen. I'm not used to having people jump on my bonnet in a public highway.

> "Tired of road crime": CyclingMikey on episode 16 of the road.cc Podcast, plus how to make the most of your lunch break

"I had to make a decision about what to do. It's right to say it was a time when everyone's nerves were heightened, Covid was still an issue. There's a stranger on the bonnet with a stick in his hand, without any clarity of what he was doing.

"I did decide very slowly to move forward and out of the way of any traffic."

Mr Van Erp told the court his interventions at the 'Gandalf Corner' junction have made it "considerably safer" and the "Metropolitan Police Service in the Royal Parks have said my actions have reduced the dangers." 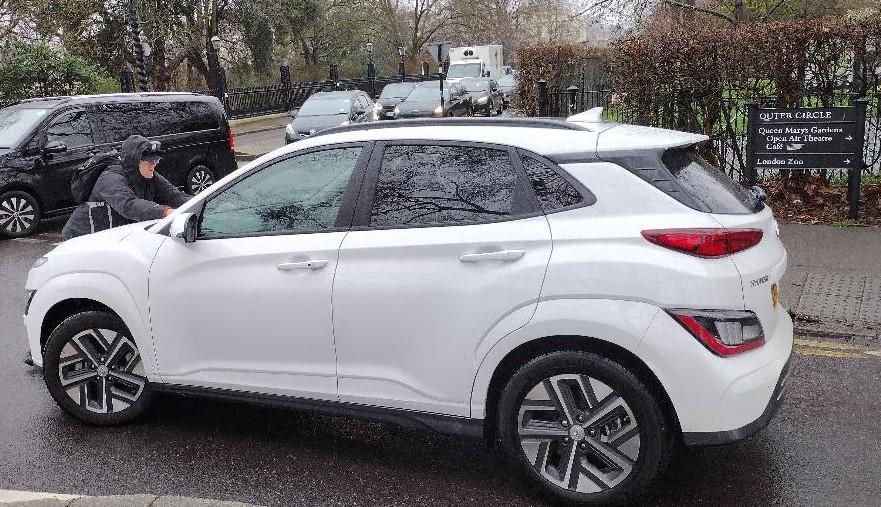 Back in March, in a separate incident at the same Regent's Park junction, Mr Van Erp was again carried off on a motorist's bonnet, a manoeuvre quickly halted by the appearance of British Transport Police who took the driver's details to be passed on to the Metropolitan Police.