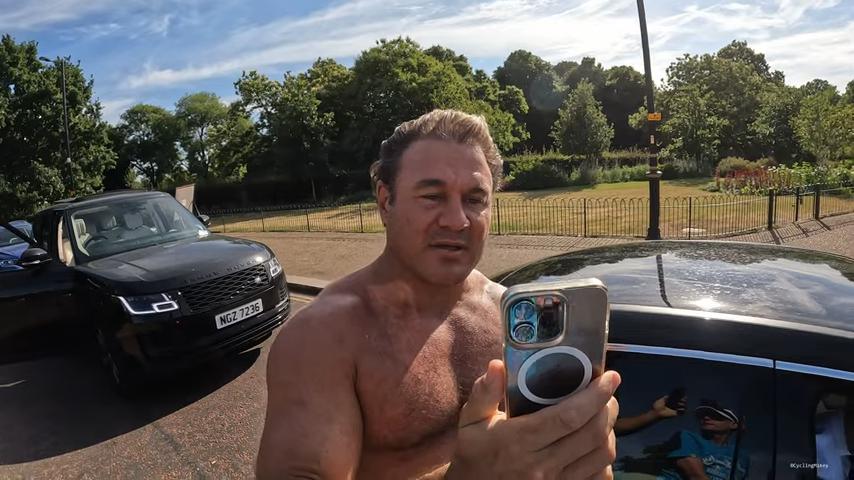 “How would you like to be on camera now?” Shirtless driver accosts CyclingMikey

“How would you like to be on camera now, Mikey?” That’s the question a shirtless Range Rover driver posed to Mike van Erp, whose videos of law-breaking drivers have led to hundreds of motorists being fined or prosecuted.

> “Tired of road crime” – CyclingMikey on episode 16 of the road.cc Podcast

The bizarre scene happened earlier this month on the West Carriage Drive in London’s Hyde Park, close to Victoria Gate on Bayswater Road.

Van Erp had been filming another motorist who was illegally using a mobile phone at the wheel when the driver, who clearly knew who he was, got out of his vehicle and began recording his own video on his phone while hurling abuse at his subject.

“I’ll put your face all over the internet now, you f*ck*ng c***,” he said, while van Erp, unflustered as ever, asked him, “Why are you shaking?”

The bare-chested driver then raised his arm at van Erp, striking his helmet.

“You be careful doing that, cos I’ll call the cops and you’ll be charged with assault. Why are you shaking so much?”

While other drivers behind beeped their horns, the Range Rover driver – dressed only in shorts and flip-flops – carried on with his tirade.

“I feel like smashing your face in, f*ck*ng people over like that. Why don’t you f*ck off?”

Van Erp turned his attention to the driver he was originally filming, telling him he would be reported to the police, whereupon shirtless guy reappeared, claiming (incorrectly) that “Police won’t do shit, he’s got stop-start technology, the engine’s off.”

In his description to the video on YouTube, van Erp said: “I caught 9 drivers before this on this day, and a further 7 afterwards, including one a couple more cars in front and moments after this. Did you think you were going to intimidate me into stopping? LOL.

“Reactions like yours are a sign of success – they tell me that the idea of members of the public filming and reporting drivers for breaking the law has gained real traction in your mind. So much so that IMO you're afraid of being caught, and you're angry about it.

“Threatening me only sustains my determination. Here's what I think: You're angry about being filmed because you don't want wrong-doing to be caught. You seem to identify with the group of road pirates who break road law every day.

“Good drivers aren't upset about bad driving being caught and punished. Most good drivers appreciate it.

“I think you're probably a driving offender yourself, and that this is why you're so angry. You're afraid of being caught yourself.

“In contrast to you, I'm quite happy to be filmed in public. That's because I try hard not to break traffic laws, endanger others, and I try hard to be a decent human being. You can film me as much as you like in public.”

He added: “Seriously though, what are you compensating for with that car and body building?”

Van Erp also explained why drivers using phones even when stationary, such as in queueing traffic, still pose a danger to vulnerable road users including cyclists, motorcyclists and children, due to factors including their lack of awareness of what is happening around them.

“Strong policing of minor traffic offences has a strong effect on reducing collisions resulting in killed and seriously injured people,” he continued.

“It's good to police these phone drivers. I'm really not interested in this nonsense of "it's not dangerous when stationary, because it clearly is and it's clearly still very appropriate to catch these drivers.”

A number of people who follow van Erp on Twitter suggested he should report the Range Rover driver for assault, but he said that he did not think the incident warranted it.

It doesn't quite cross the line IMO. Perhaps I'm wrong, but so it is.