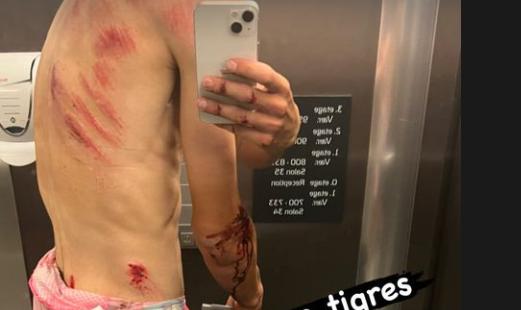 Ruben Guerreiro shared this snap of his road rash covered back after falling heavily during one of the major crashes which blighted the final stages of yesterday's Tour de France opening road stage.

Guerreiro took to Instagram to share his war wounds, including some significant road rash across his upper back, shoulders, hips and elbow, captioning his photo 'Luta com tigres' (fighting with tigers).

More accurately, it was Stefan Küng who Guerreiro was fighting with on yesterday's stage, the TV cameras picking out an altercation between the two riders roughly 10km before the crash which caused the badly-scraped rider to limp home second last on the stage, 11 minutes behind stage winner Fabio Jakobsen.

> Are these Cannondale & Palace EF Education team bikes the maddest in the peloton?

Küng appeared to grab Guerreiro during the disagreement and has since been fined 500 Swiss Francs and docked 20 points in the UCI World Ranking.

At the finish the Swiss powerhouse told Cyclingnews: "It was to say 'hey look in front'. It was really hectic, and there were a lot of spectators on the road. He was always looking back, and I said 'look in front, man, it's really dangerous. It's all good. We spoke with each other, all is well. It's racing, everyone wants to be safe, but it's all good."

Interesting move by Küng here (right side, against an EF rider). Will this move have consequences? #TDF2022 pic.twitter.com/pWdIb4Ne5P

EF Education-EasyPost's eventful start to the race continued yesterday. As well as Guerreiro's fall, team leader Rigoberto Urán fell and bridged a gap in excess of a minute over the length of the bridge, with the help of his team, to finish in the front group and not lose any time.

Home hero Magnus Cort is also the race's first wearer of the KOM polka dots having swept up all three points on offer from the breakaway.

Something tells me he quite enjoyed that...

"It helped me a lot, being on Danish roads. I knew it was a really good opportunity for me to get on the Tour de France podium in Denmark and it's unbelievable that I was there wearing one of the jerseys. For me the biggest and the most important is to get it on Danish soil and then ride in it," Cort said.

Call a doctor! Pink polka dots! This will definitely cause an *#%?€£**% lasting longer than 4 hours!