"It's baffling Northern Ireland will put so much care, attention and likely funding into hosting the Tour de France for a couple of days while failing to make everyday cycling safer"...
by Dan Alexander

Cycling UK has criticised Northern Ireland's joint bid with the Republic of Ireland to host the Tour de France's Grand Départ in 2026 or 2027, calling it "baffling" when everyday safety policy is still putting cyclists "at risk" and omits recent Highway Code changes.

The charity's spokesperson in Northern Ireland, Andrew McClean, stressed that whilst Cycling UK would "love" to see the race return to the island of Ireland, "a real lasting legacy for cycling would be for Northern Ireland to stop ignoring the essential work required to help people travel cheaply, sustainably and safely by bike". 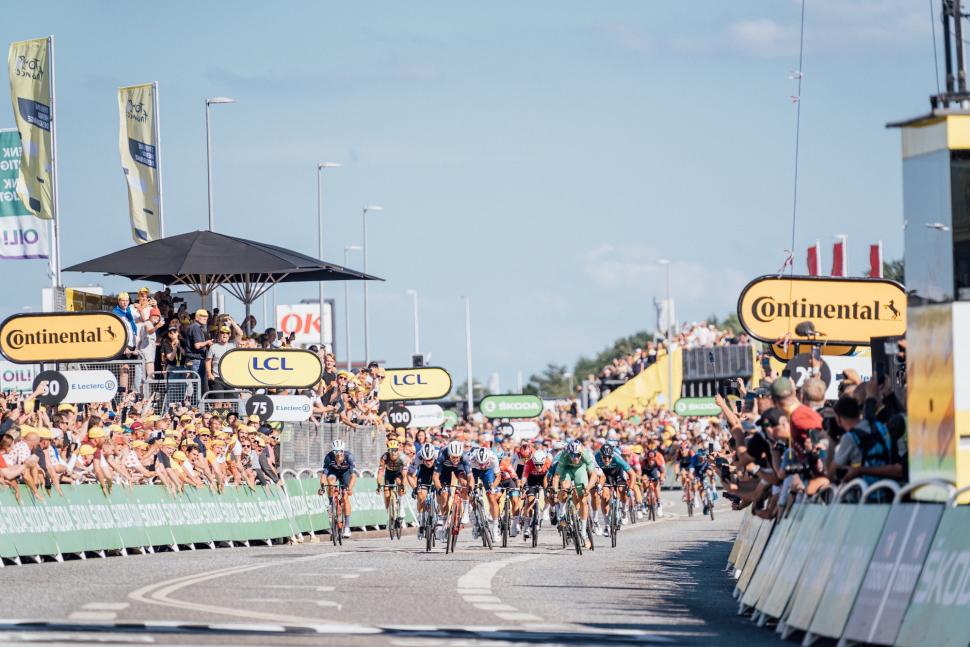 The comments come as the Department for Infrastructure proposed its Road Safety Strategy for Northern Ireland — aiming to support policy on sustainability, economic development, climate change and active travel — but, Cycling UK says, it does not encourage active travel as it fails to protect vulnerable road users and "further entrenches car dependency".

Cycling UK and other active travel organisations provided advice during the consultation period, and specifically recommended the 'hierarchy of road users' from January's Highway Code changes was implemented into the strategy, something which has not been done.

"Less than three per cent of trips in Northern Ireland are taken by bike, and this strategy will stall this figure for even longer if they fail to acknowledge vulnerable road users in this strategy.

"The report states that one of the biggest barriers to active travel is the fact that pedestrians and cyclists simply don't feel safe moving alongside traffic, yet the use of antiquated terms like 'shared responsibility' fails to take this into account.

"The introduction of hierarchy of road users in Britain's Highway Code was a move away from the outdated notion of equal responsibility and a recognition those presenting the danger on our roads bore greater responsibility – but this progression has been ignored in Northern Ireland."

Back in September, Cycling UK accused a Sinn Féin minister of "neglecting Northern Ireland's future" and "locking us all into a fossil-fuelled dark age" after he appeared to renege on a pre-election pledge to introduce an Active Travel Act in Northern Ireland.

Cycling UK also highlighted the timing of the Tour de France bid, suggesting a government failing to take the safety of utility and leisure cyclists seriously has "no credibility if it then submits a bid to host the world's biggest race".

"Cycling UK would love to see the Tour return to the island of Ireland, but a real lasting legacy for cycling would be for Northern Ireland to stop ignoring the essential work required to help people travel cheaply, sustainably and safely by bike," Mr McClean continued.

"It's baffling Northern Ireland will put so much care, attention and likely funding into hosting the Tour de France for a couple of days while failing to make every day cycling safer."

News of the Irish bid dropped last month, with murmurs of discontent from some who suggested the estimated €30 million cost of hosting the Grand Départ would be better spent elsewhere.

Ireland's Minister of State for Sports, Jack Chambers predicted costs of between €20 million and €30 million to be shared by the north and south, prompting some to question if the investment would be better spent on infrastructure, or even on the sport at a grassroots level.

The Tour de France has only visited Ireland once, but never the north, back in 1998 when the sporting occasion was overshadowed by scandal as a host of drugs and doping products were found with a Festina team soigneur as he crossed the French-Belgian border days before the Dublin start.

Grand Tour racing returned to Ireland in 2014, visiting Northern Ireland too, as the Giro d'Italia began with three stages on the island, starting with a team time trial in Belfast.