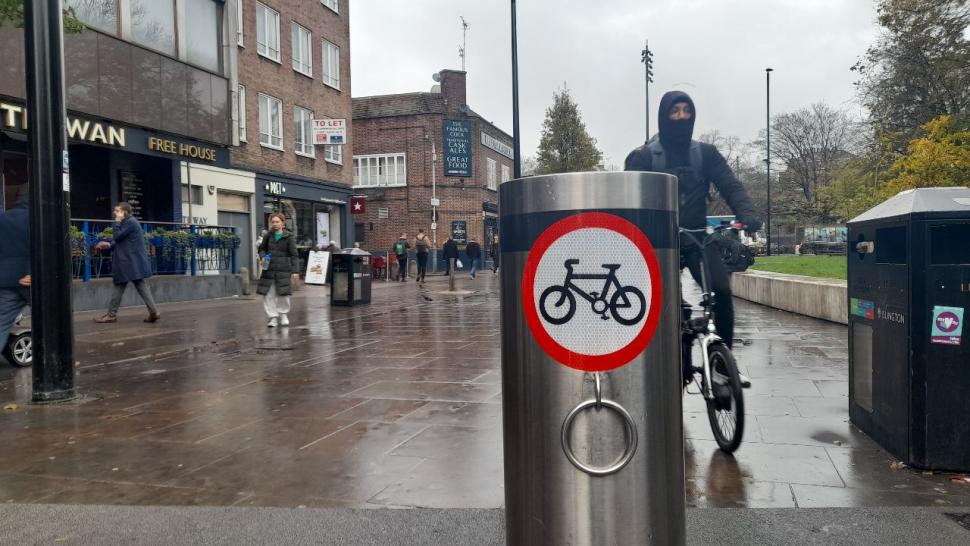 Cyclist fined £75 for riding outside London tube station – but park your bike there and it could set you back £50,000

A cyclist has told road.cc of how he was fined £75 for riding through a pedestrian zone outside a tube and Overground station in north London – but a closer look at the location suggests he got off comparatively lightly, with notices attached to bicycles parked on railings there threatening fines of up to £50,000 for fly-tipping. 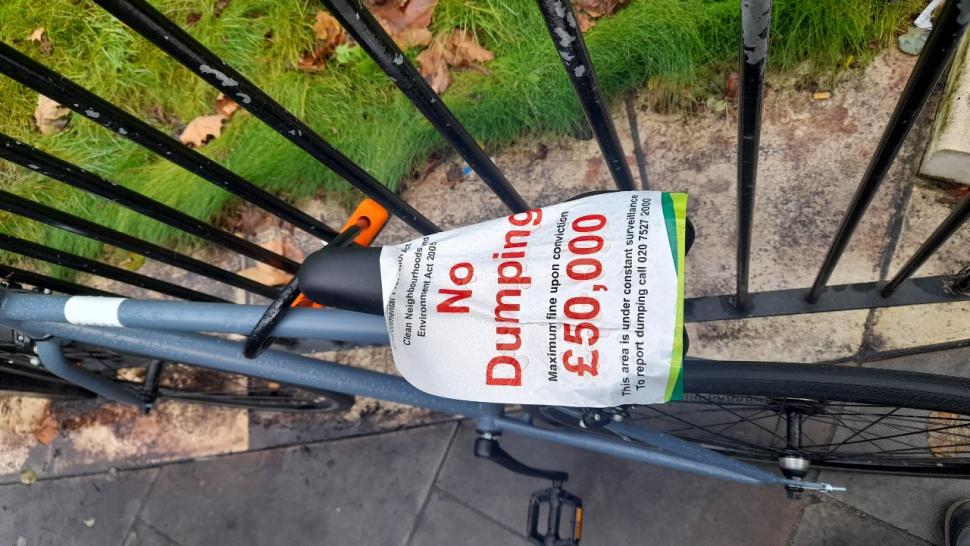 Highbury Corner in the London Borough of Islington has undergone a major transformation in recent years, with three sides of the former gyratory converted to two-way traffic, and segregated cycle lanes (as shown below) in the CGI image and map from the initial consultation. 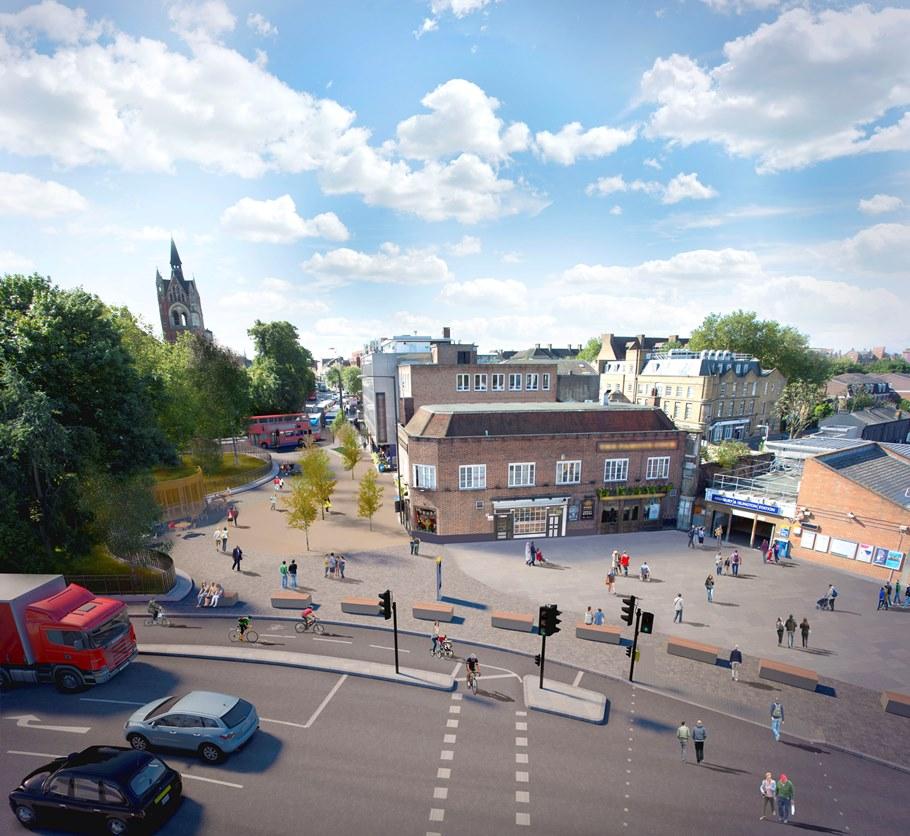 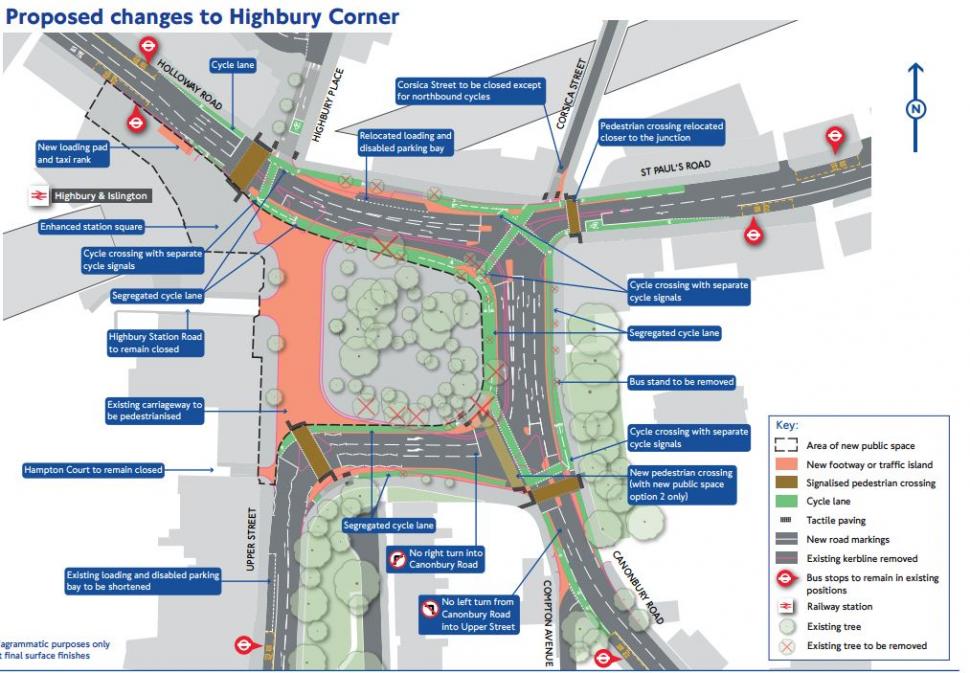 Meanwhile, the western side, by a Wetherspoons pub, a branch of Pret, The Famous Cock Tavern and the entrance to Highbury & Islington station, has been closed off to traffic to become a pedestrianised zone, with cycling banned. 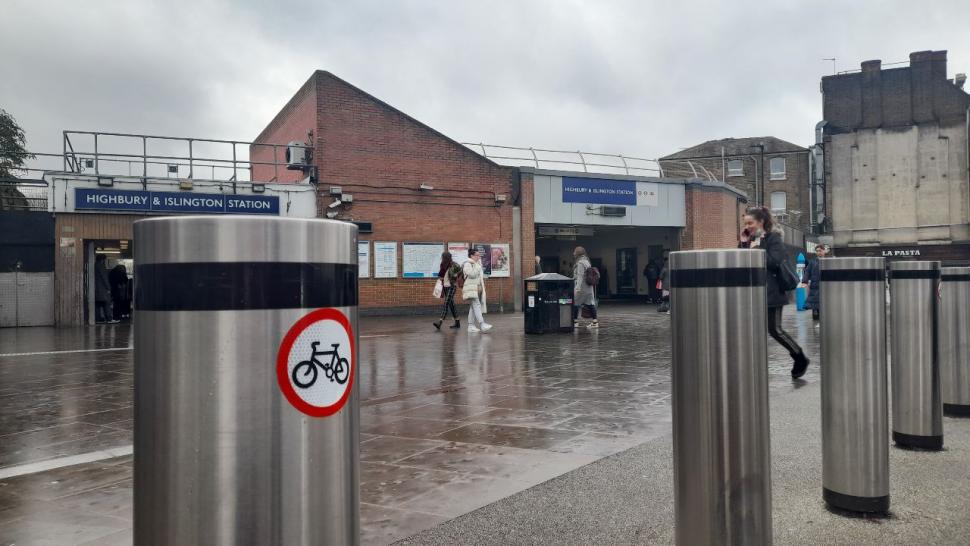 In a forum post last Thursday evening accompanied by a link to the location on Google Maps, road.cc reader Unalteu said: “A few weeks ago I was on a little cycle when I passed through a small square that I always go on and every other cyclist going on that square does not dismount.

“My point is everyone is cycling ,and while ‘the nothing better to do douche’ officer was writing the fine there where about five cyclists going past us on their bikes which I pointed out, there’s only a very small inconspicuous sign with the cycle in a red square thing.”

He said that when the letter arrived confirming the fixed penalty notice, his surname was misspelt and his date of birth was shown as April instead of September.

Asking for advice on whether he should fight the fine or ignore it, he added: “Needless to say I don’t want to pay £75 for this nonsense as [I’m] in UC [Universal Credit] also and it’s utterly ridiculous.”

Plenty of advice was forthcoming in the replies, including from local cyclist MatthewN5 who quickly identified that there is a problem with the remodelled junction – namely that the pedestrianised area removes the direct route along the A1 from Upper Street to Holloway Road.

It’s a particular issue for northbound cyclists and as a result many continue to follow the desire line through the pedestrianised area in front of the station – as do a  number of cyclists heading south. The result? Well, no-one’s happy. 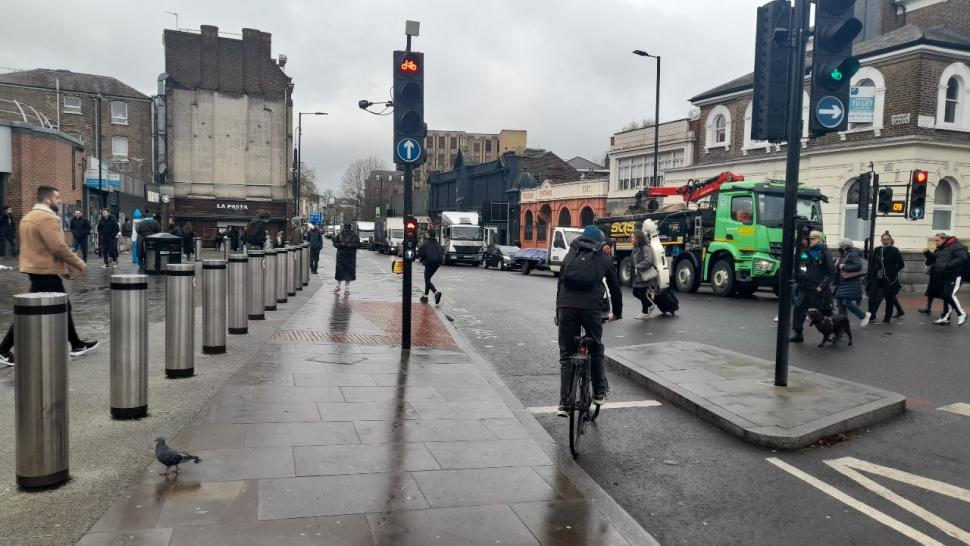 “Lots of Islington people complained when the design was first put out to comment that cyclists had to go the long way round the junction instead of taking the short and now traffic-free way,” MatthewN5 explained, “but to no avail.”

He continued: “As it is, this big area of vomit stained paving has become a problem exactly as we foresaw, with drunks spilling out of the two pubs, a clutter of delivery mopeds and poor drainage. It's also the most commented on place in Islington’s Commonplace consultation on low traffic neighbourhoods, with dozens (if not hundreds) of complaints about people cycling through... so you've been unlucky to come across the policing in response to that.”

It so happened that we were passing through Highbury & Islington station on the Overground the day after Unalteu posted on the forum, so we decided to stop and have a look for ourselves.

The no cycling signs he mentioned are circular rather than square, but the point stands – they are small and attached to bollards at around waist height and especially at busy times, can be easy to miss. 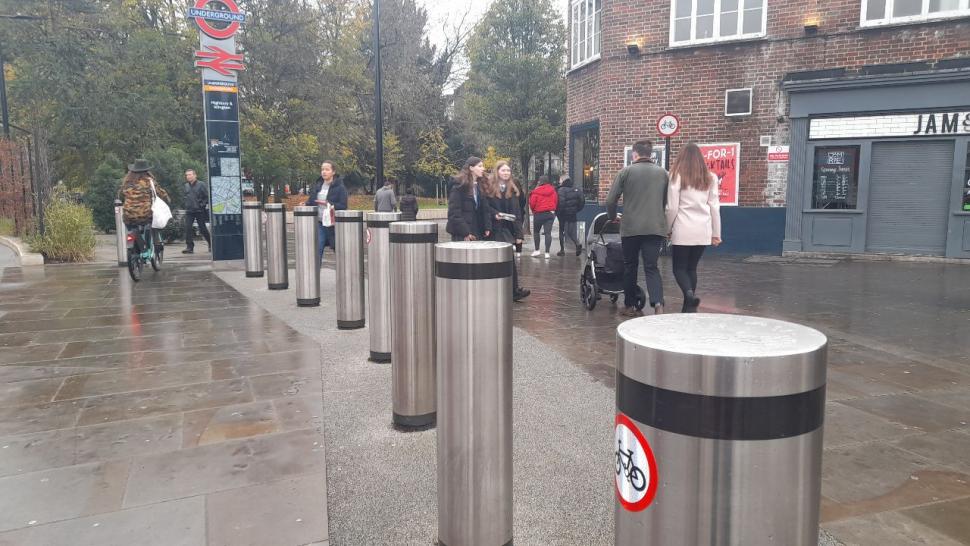 In the 15 minutes or so we were at the junction, we saw a number of cyclists cut through the pedestrian zone, especially coming from Holloway Road into Upper Street – but almost without exception they were doing so responsibly, and we did not observe any cases of obvious conflict between people on foot and those on bikes.

It did strike us that there would have been plenty of space to put a cycle lane between the footway and the grassed-over area called Highbury Island that the gyratory used to encompass, which does seem to be a missed opportunity – and it was there that we spotted the fly-tipping warning signs attached to several bikes locked to the railings. 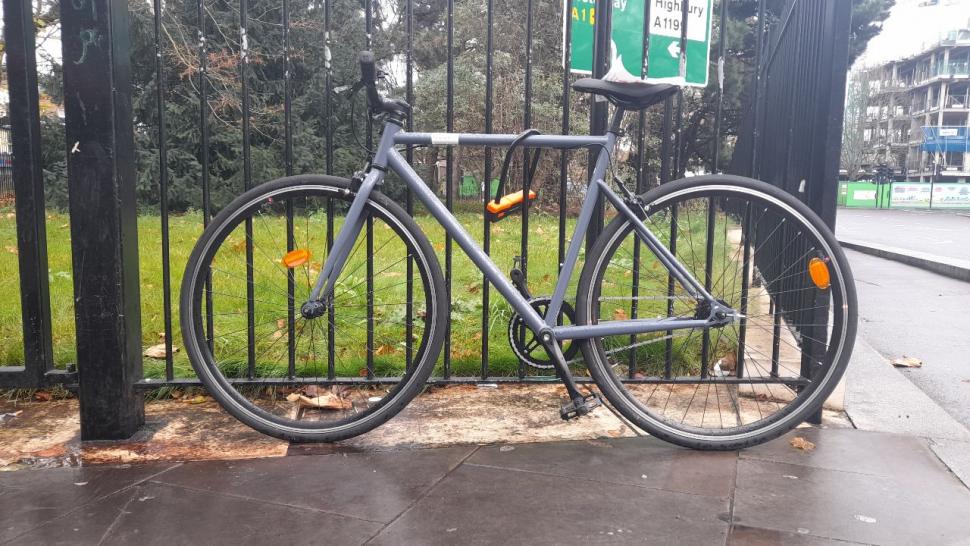 Now, it’s true that there is ample cycle parking nearby – in late 2014, Islington Council installed double rows of bike stands at the top of Highbury Station Road (much to the confusion in the early weeks of rat-running drivers, with the former layout shown in the May 2014 Google Street View image below). 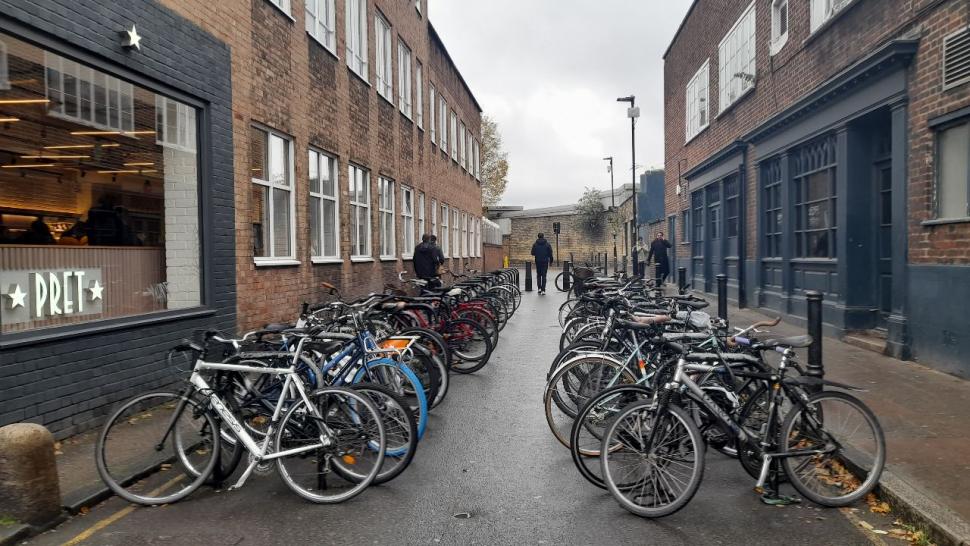 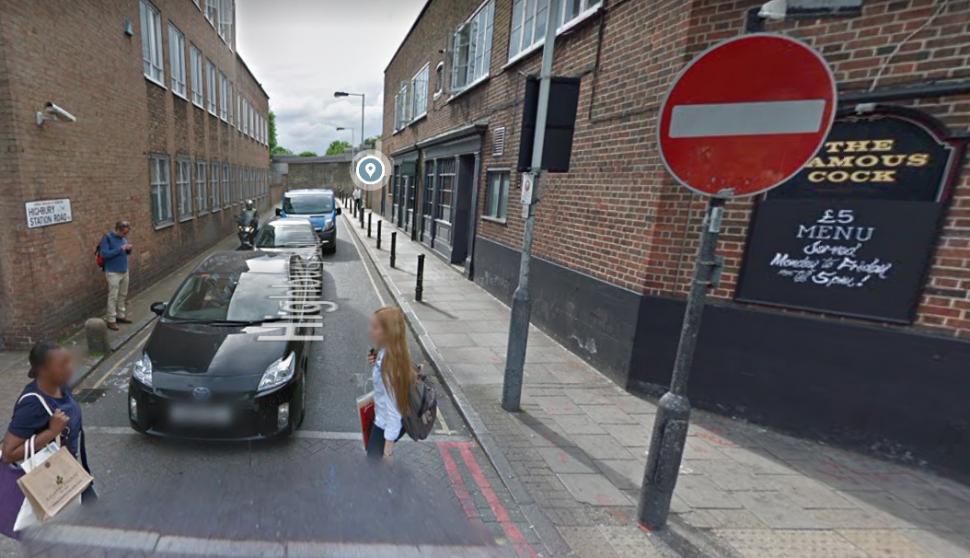 Still, a potential fine of up to £50,000 for locking your bike up to some railings does seem a bit steep to us – and just imagine the insult to injury that might add to the poor owner of this bike, stripped bare of pretty much everything that could be removed …