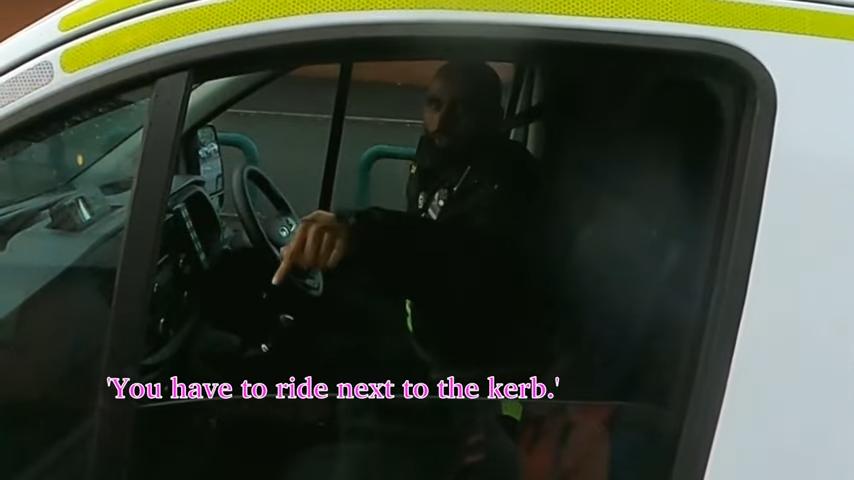 A cyclist has slammed the "shocking level of ignorance" shown by a police officer who told him and other cyclists he was with to ride in single file and next to the kerb.

Ironically Grahame Cooper was on a Critical Mass ride in Bolton, Greater Manchester on Friday evening when the officer pulled up alongside his group in a police van and wound down the window.

"You can't ride out in the road like this" he says, before adding that the cyclists "have to ride next to the kerb" and are "supposed to ride in single file."

Grahame tells the officer that in fact – as the Highway Code now makes even clearer – the group do not need to ride in single file, adding: "Talk to the people in your traffic division... they'll explain to you what correct road positioning is for cyclists."

Grahame told road.cc that after notifying Greater Manchester Police of the officer's incorrect assertions, he was very satisfied with the response the next day, with GMP apologising and saying the officer would be educated on traffic laws.

An officer at GMP told Grahame: "I have reviewed your complaint and the video footage and would like to apologise on behalf of GMP and the officer that had spoken to you. I am a cyclist myself and can understand your frustrations.

"I will ensure words of advice are given to the officer along with some education around traffic offences/ cycling legalities."

Grahame told road.cc: "I then suggested wider guidance to officers might be good and got the response: "I will be sure to make staff aware during briefing due to the changes in the highway code in the past 12 months"."

This isn't the first time we've reported on serving police officers who need to brush up on their Highway Code: in March of this year a cyclist told of how she was pulled over by two Metropolitan Police officers for “putting [her] own safety before cars” and not riding "courteously" after she was close passed by a motorist.

In 2019, a cyclist who submitted close pass footage to to the Met Police was threatened with prosecution himself for riding on a footpath, when the stretch of path he was on was clearly marked as shared use.

“It highlights how clueless police are about cycling and to me seems to be an attack on cyclists”, said road.cc reader Giles at the time.