Subscribe
Back to Features
feature
How to
Can you ride two abreast? | unpicking the rules of the road

Why do cyclists ride two abreast?

It's not illegal nor forbidden by the Highway Code; find out why riding two abreast is often the best and safest positioning.
by Mat Brett

Updated to reflect changes to The Highway Code that came into effect in January 2022.

You'll often hear that cyclists shouldn't ride two abreast – it's a classic for angry people on social media – but what does the law say and when is it appropriate? Here's what you need to know.

We reported on road.cc back in 2017 that a police officer in Essex had pulled over a couple of cyclists and insisted they were breaking the law by not riding in single file. The cyclists were told, "You are causing other road users to drive carelessly."

Even after consulting a copy of The Highway Code, the officer insisted that the cyclists were endangering themselves and other road users by riding side by side, and took down their details.

The version in force at the time stated, at Rule 66 that among other things, cyclists should:

Never ride more than two abreast, and ride in single file on narrow or busy roads and when riding round bends.

So side-by-side cycling wasn't prohibited then, and it isn't prohibited now. The current version of Rule 66, updated in January this year, says among other things that cyclists should:

Be considerate of the needs of other road users when riding in groups. You can ride two abreast and it can be safer to do so, particularly in larger groups or when accompanying children or less experienced riders. Be aware of drivers behind you and allow them to overtake (for example, by moving into single file or stopping) when you feel it is safe to let them do so.

The previous version did not provide any definition of what constitutes a 'narrow or busy road', nor how many degrees are there in a bend, and the new wording, drawn up following feedback from cycling organisations reinforces that there is nothing wrong in riding two abreast.

The instructions not to ride more than two abreast, and to ride in single file in certain circumstances are advisory. You can ignore the advice, then? It's worth bearing in mind that according to The Highway Code, "Although failure to comply with [advisory] rules of the Code will not, in itself, cause a person to be prosecuted, The Highway Code may be used in evidence in any court proceedings under the Traffic Acts to establish liability".

Riding two abreast can be the sociable choice, of course, in that it allows you to chat easily with other riders rather than shouting forwards and backwards along a line. That's a big part of cycling's attraction for many people. 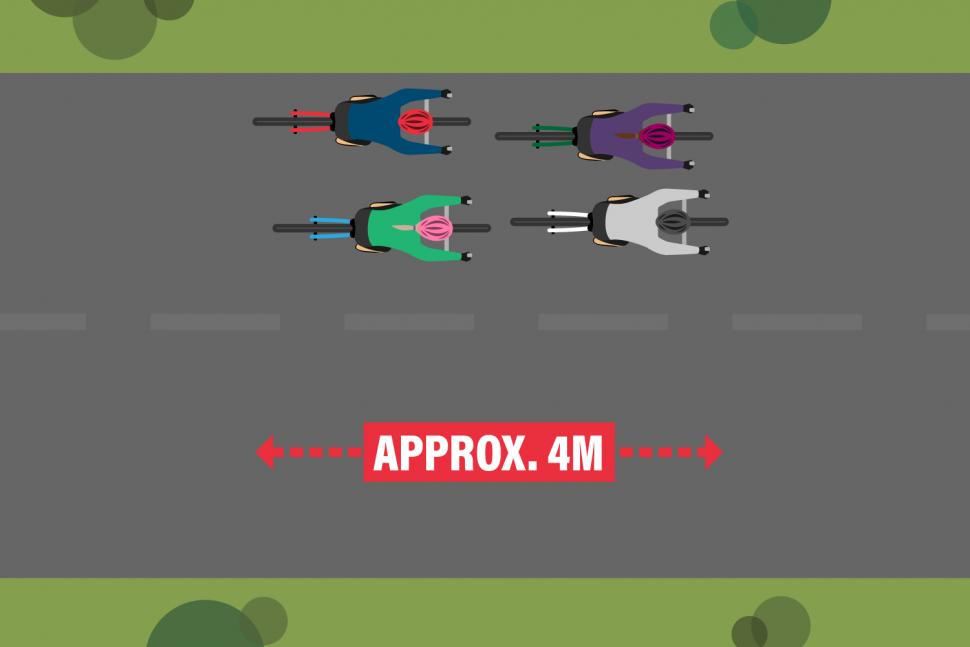 You might see comments from armchair experts saying that the road isn't the place for going out and being sociable. That might be their opinion but it certainly isn't a rule you'll find in The Highway Code... not even an advisory one.

Riding side by side can improve your safety too. It allows you to be seen more easily by other road users, both ahead and behind (see our article Why don't cyclists stick to the left of the lane? for more on visibility in different road positions).

It also helps motorists in many circumstances by shortening the distance required for overtaking. Cyclists riding side by side take up about half the road length of cyclists riding in a single line (the example figures of 4m and 8m shown in our illustrations are dependent on how closely each cyclist follows the wheel in front, of course). 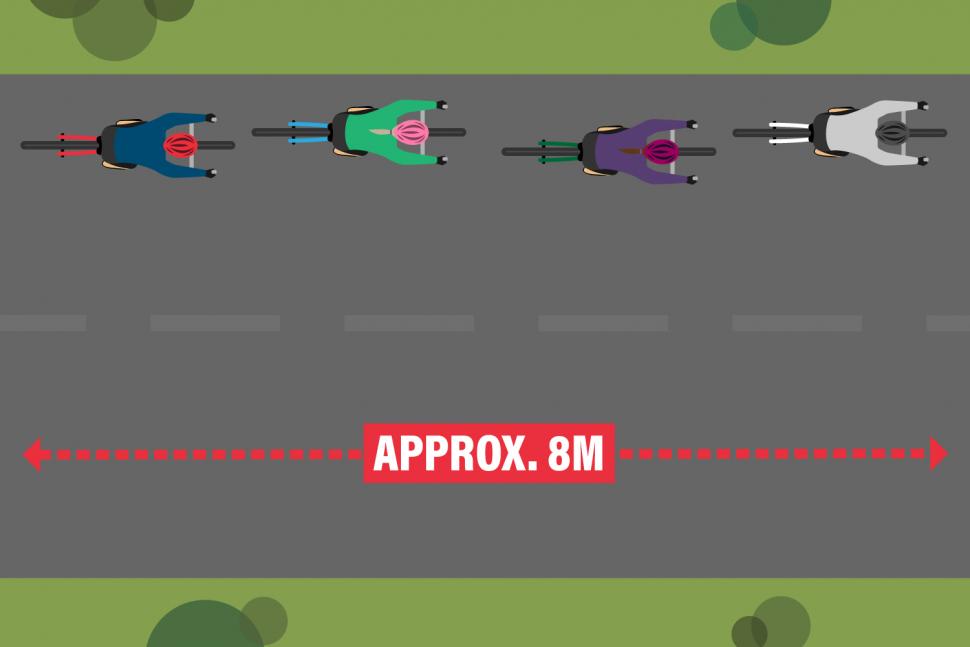 'Close pass' initiatives make it clear that motorists should always give cyclists clearance of at least 1.5m when coming by, and since January that is also included in the Highway Code, under Rule 163.

This virtually always means moving on to the opposite side of the road, at least partially, so overtaking when traffic is coming in the other direction isn't an option. With that in mind, riding two abreast doesn't generally prevent overtaking when it would otherwise be safe and reasonable, although it might stop motorists squeezing past when there's not enough space.

Why don't cyclists use cycle lanes?

In his cycling skills manual Cyclecraft – which forms the foundation of Bikeability, the UK's national standard for cycle training – John Franklin says, "If the road situation is such that it would be unsafe for traffic to pass cyclists riding in single file, 10 riding two abreast can help dissuade following drivers from doing so."

Franklin also advises, "The longer the riding group, the more difficult it will be for other vehicles to overtake and the more likely they will be to cut in between riders. For these reasons, groups should divide, as necessary, into sub-groups about five riders long, with a gap of at least 20m between sub-groups. This allows traffic to overtake one sub-group at a time."

When to single out

As mentioned above, The Highway Code says that cyclists should "be aware of drivers behind you and allow them to overtake (for example, by moving into single file or stopping) when you feel it is safe to let them do so," but doesn't elaborate further.

As a result, you need to use your own judgment here, and that develops with experience. You'll probably consider it appropriate to move to single file if traffic is getting held up behind you and it's safe to let it overtake.

This video with Chris Boardman (produced when the previous version of The Highway Code was in force) makes things clear...