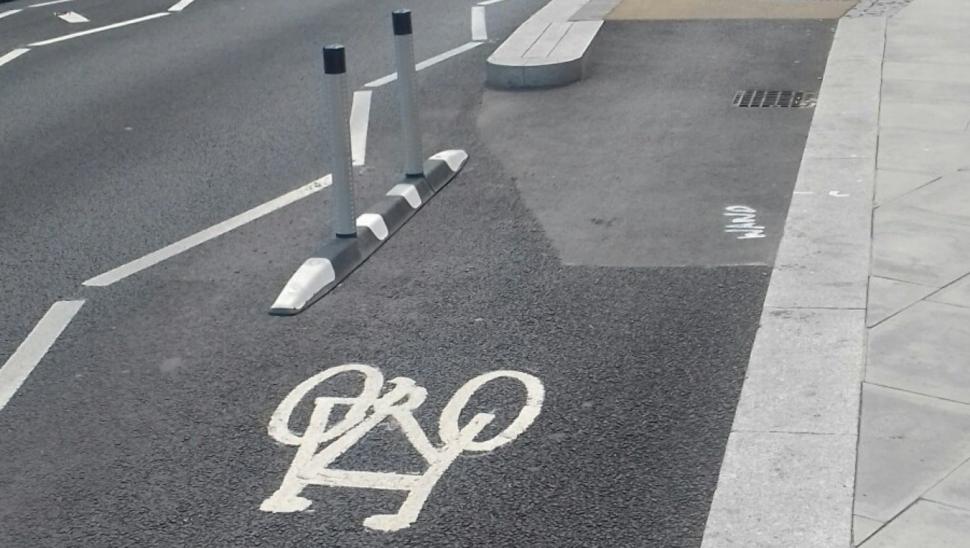 Cardiff Council are now going to use spray paint to increase the visibility of the bollards...
by Will Bolton

Shop owners have complained after a number of pedestrians tripped over a newly installed cycle lane.

One local shop owner claimed there has been at least a dozen incidents since January, including one in which an elderly man broke his wrist.

The two-way cycleway on Wellfield Road in Roath, Cardiff was introduced earlier this year as part of a pilot scheme that also saw the road made one-way.

Footpaths were widened and parking was removed from both sides of the road last summer to allow social distancing.

But Wales Online report the lane has proved controversial.

Cardiff Council are now going to use spray paint to increase the visibility of the bollards after receiving two reports of people tripping last week, but said they had received no previous reports of the issue before then.

CCTV footage showed the moment one elderly man fell over the lane bollards and broke his wrist, less than two weeks after another man tripped over further up the road and was treated by paramedics.

Jeffrey Atkinson, 78, fell into a wooden tree planter after stumbling over the cycleway on July 22, and suffered bruised ribs as well as a wrist fracture.

Mr Atkinson’s daughter, Dawn Christopher, 54, said her father was “very shaken up” by the incident, but only discovered that his wrist was fractured when he reluctantly visited A&E the following day.

Mr Atkinson’s fall came a matter of days after another man was captured on CCTV tripping over the bollards on the edge of the lane and tumbling onto the pavement, before being treated by an ambulance crew that was luckily waiting in traffic further down the road.

Dawn said that the fact that so many people had fallen over the lane since it was installed made her “very angry”.

“Something definitely needs changing with that cycleway,” she said. “It needs to be made a lot safer, or else people will continue to get hurt.

“It’s a white barrier that is holding the bollards and it’s incredibly hard to see against the outlines of the road - maybe it needs to be raised so people can see it, but it definitely needs to be made more visible, whatever happens.”

Kaivan Forouzan, owner of Luxor clothing store, was one of the first to help Mr Atkinson up after he tripped over a lane marker.

A spokesman for Cardiff council said: “A stage three road safety audit was carried out on Wellfield Road in March this year, and the necessary steps have been taken to address the issues that were identified.

“Until last week, the council hadn’t received any reports of people tripping over the lane separators or the bollards on this road, but due to these two recent reports, the council will be increasing the visibility of the bolt down bollards using coloured spray paint.

“The bolt down bollards are in place to segregate the pop-up cycleway from the traffic lane and already have white reflective banding on them. By using coloured spray paint on these units, we hope to make them stand out to the public even further."