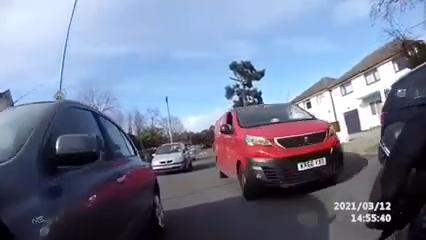 Our regular series featuring close passes from around the country - today it's southwest London...
by Simon_MacMichael

Today’s Near Miss of the Day features two vulnerable road users – a man on foot who is about to get into his 4x4, and a cyclist – being put in danger by the driver of a Royal Mail van who makes no effort to slow down on a residential street where the carriageway is very narrow due to vehicles being parked on both sides.

It was filmed in Kingston-Upon-Thames by road.cc reader Daniel, who said that the driver “accelerated towards me,” and that it was “a miracle he didn’t hit the pedestrian.

“No attempt to slow down, drives at me and then passes dangerously close to me,” he added.

Daniel said that he submitted the footage to the Metropolitan Police but no action was taken.

Subscribe
Near Miss of the Day
NMotD London
NMotD van

1
Canyon partners with Cyclescheme for up to 39% savings and no upfront costs
2
Near Miss of the Day 571: Driver makes very close and fast pass on cyclist descending country lane (includes swearing)
3
Arrest made after Sussex cyclist injured in serious assault
4
Win! 5 anti-theft GPS tracking Alterlock units to be won worth £114.99 each
5
Endura pays tribute to sales manager Simon Richardson, killed in bike crash on easter Sunday
6
Near Miss of the Day 570: Van driver Must Get In Front of group of cyclists
7
Two wins in two days for Mark Cavendish (+ video)
8
BBC corrects Nick Robinson’s comment that “you cannot use your car” in a low traffic neighbourhood