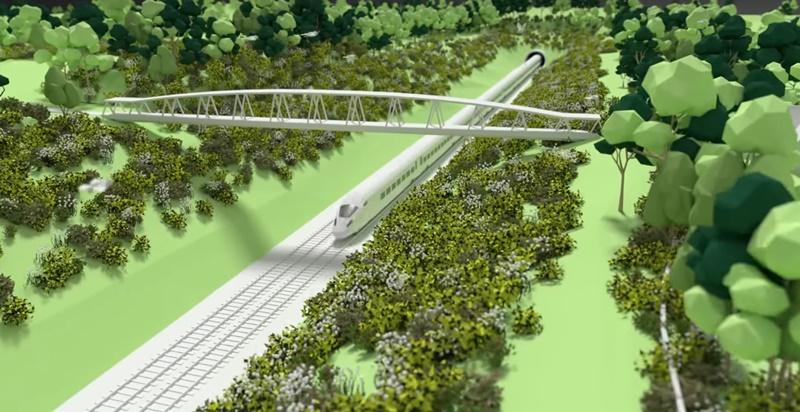 All Party Parliamentary Cycling Group members Ruth Cadbury and Lilian Greenwood have written to Transport Minister Andrew Stephenson asking him to commit to building a cycleway along the full route of HS2. The Department for Transport (DfT) has so far said only that plans for cycle routes at 11 points on the route are being “refined”.

In June 2015, then cycling minister Robert Goodwill told road.cc that a cycle network would be built around HS2. He said it wouldn't be the long distance cycle track suggested by Boris Johnson but a network of routes developed from existing bridleways and footpaths.

The government later published a study which looked at the possibility of building a national cycleway along the route of the HS2 railway. However, a cover note suggested it would be down to local authorities whether anything actually got built.

Compounding this lack of commitment, the Government failed to tell HS2 Ltd to ensure new bridges and tunnels crossing the rail line were safe and attractive for cyclists and walkers. Cycling UK said that HS2 was “penny pinching” on the costs of tunnels and bridges and called its commitment to cycle-proofing the project “pathetic”.

Writing to Stephenson this week, Cadbury and Greenwood said that an HS2 cycleway was a chance to connect villages and towns where private cars are currently seen as the only viable travel option and where local roads will be cut as a result of the rail line.

The two MPs argue that the environmental, public health and economic case for such a project is clear.

“A feasibility study commissioned by your department on the subject found that full implementation of the plans would lead to health, congestion and economic benefits of between £3 and £8 per £1 spent. As we look towards emerging from the pandemic and repairing the vast economic damage, we must take every opportunity for economic growth and investment that our communities need.

“A cycleway will help build rural cycle networks and also bring new opportunities for both domestic and international tourism.

“Although it was reassuring to hear that plans to build cycle routes at 11 points along HS2 are being ‘refined’, with £1.4m allocated, we would be grateful if you could provide further clarity on your department’s commitment to implementing the cycleway in full.

“Naturally, to create a cycle network around the Phase 1 route of HS2 will cost significantly more than £1.4m and require additional Government investment in line with the Prime Minister’s cycling ambitions.”

Cadbury and Greenwood concluded by requesting more information about the 11 “key sites” where cycle routes are planned as well as confirmation that the work will adhere to the Government’s recent guidance.

They also suggest repurposing the haul roads used by construction vehicles to build the railway line as cycling and walking routes.