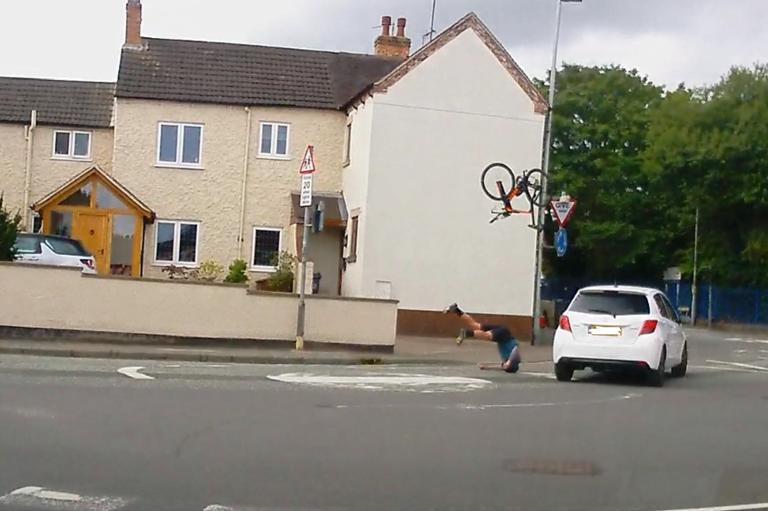 Remarkably Jack Schofield came away with no lasting damage from the crash, but warns: "Today I witnessed first hand how a simple mistake can be almost fatal"...
by Jack Sexty

It's a horrifying image that makes you do a double take, as Jack Schofield and his bike are sent flying following a collision with a driver who decided to go the wrong way around a mini roundabout without making basic checks. Jack now wants to raise awareness to improve driving standards around vulnerable road users, explaining that he was "immensely lucky" not to have come off worse from the incident.

> Hit by a driver? The 9 vital steps you should take next

The collision happened on Thursday in Ashby-de-la-Zouch, when Jack, a 27-year-old photographer and competitive triathlete who rides for Bath Cycling Club, was in the middle of riding 300km from his home in Leeds to Cheltenham, where he was attending a friend's wedding the next day. Unfortunately Jack was destined to arrive on crutches, as the driver of the white car failed to spot him going over a mini roundabout, ploughing into him and his now written off Giant Trinity bike.

The driver was actually being followed by a colleague in a separate vehicle, which happened to have a dashcam that captured the moment of impact.

Jack told road.cc: "I grabbed the phone and airdropped the footage to myself, thinking I really want to have this footage on my phone before you leave.

"She hadn't seen me and carried on driving. I hit the front left of her car trying to miss it. Bent the number plate, bent the front bumper and smashed all the front windscreen with the helmet.

"My bike went up in the air, I hit the ground pretty hard but rolled luckily.

"Because I was rolling it all completely missed me, I was unlucky to be hit but literally couldn’t have been more lucky. Medical professionals have told me I should have a broken neck!" 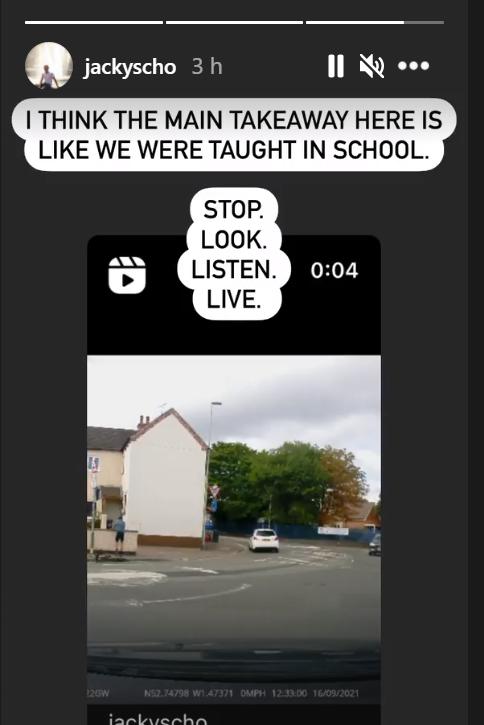 Jack said he was incredibly fortunate that his bike took the brunt of the impact, and although he was able to get up afterwards, he was taken to Queens Hospital in Burton for X-rays and further checks. He reiterated how lucky he was to come away without any lasting damage other than being "incredibly sore, bruised and shaken".

> How can road violence against cyclists be stopped? Listen to episode 7 of the road.cc Podcast

He added: "It makes you feel very mortal and makes you realise how dangerous it is.

"She [the driver] made an honest mistake, a very stupid one but she didn't mean it. Unfortunately there are drivers out there who do things like this maliciously.

"For drivers who don't know cyclists and want to shave 30 seconds off their journey, actually you've just put my life at risk. I'm a cyclist but also a brother, boyfriend and son.

"If I can get one person to give a bike an extra metre and therefore miss an accident then I'm happy with that." 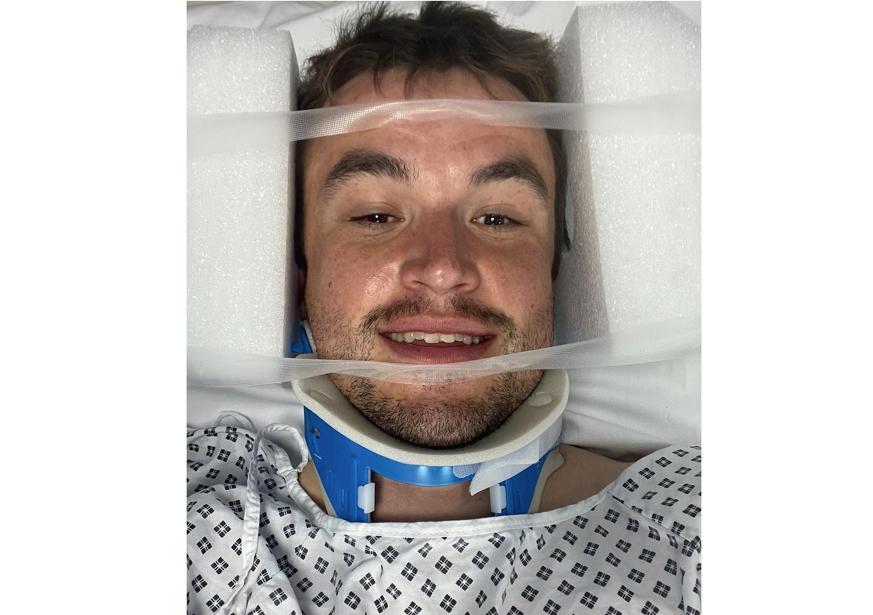 Jack in hospital following the incident

"Overtaking a cyclist for a few extra seconds, cutting a corner because you’re in a hurry, or not properly checking a junction because there’s “usually nothing there”. Today I witnessed first hand how a simple mistake can be almost fatal - and not everyone walks away as lucky as me!

"Please look after each other out there - luckily a bike and a smashed windscreen can be replaced - people can’t."