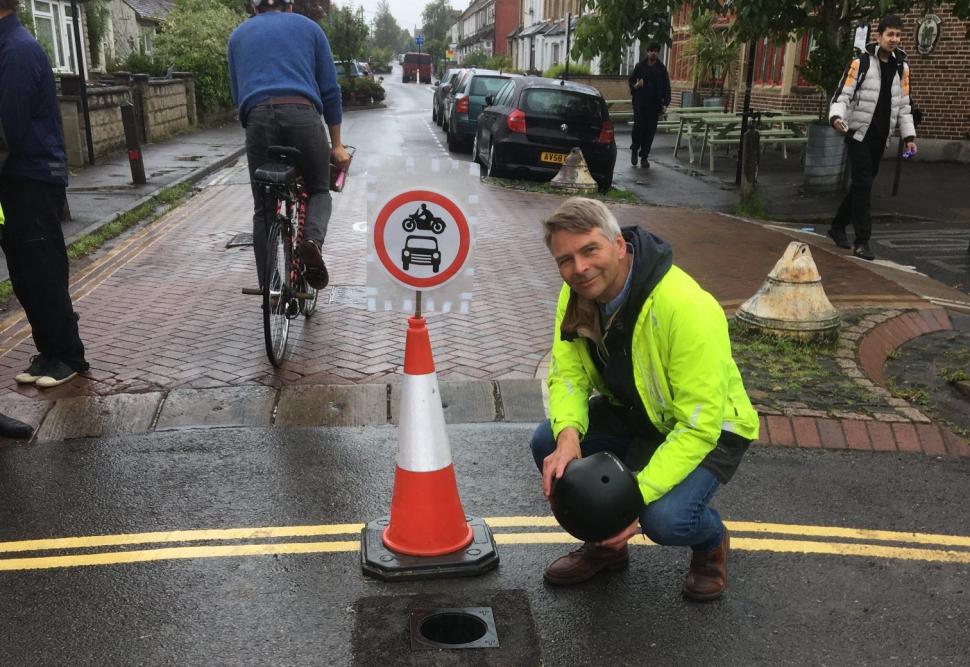 The volunteers say they will act as 'human bollards' during rush hour, replacing the bollard and planters which have been vandalised multiple times since installation last month...
by Dan Alexander

A group of Oxford volunteers will replace a Low Traffic Neighbourhood (LTN) bollard during rush hour this week following a spate of vandalism.

The Oxford Mail reports the LTN planters and bollard on Howard Street have allegedly been vandalised "six or seven times" since they were installed last month, prompting a group of cyclists and members of the Oxford Pedestrians Association to stand guard during rush hour — preventing drivers from using the road as a rat run.

Liberal Democrat councillor Andrew Gant joined the volunteers yesterday morning, and thanked them "for looking out for the safety of local people in response to deliberate damage".

Very good to join residents and others in Howard St this morning. Huge thanks to them for looking out for the safety of local people in response to deliberate damage, and to representatives of TVP, County Council officers and the Oxford Mail for coming to see for themselves pic.twitter.com/uZqyy0s88m

The bollard had reportedly been designed to be knocked down by emergency vehicles in case of 999 emergency, according to local media reports, but has repeatedly been removed and no entry signs scraped from the wooden planters.

'Human bollard' organiser Owen McKnight told the Oxford Mail: "We've been really pleased our presence has reminded drivers that it is illegal to pass through whether there is a bollard or not. We feel we've done our job and we've done the job that Oxfordshire County Council and Thames Valley Police should have done."

@TVP_Oxford @bigdamo Seriously, we now have angry cars speeding BOTH ways down Howard street mixing with cycling kids and pushchairs who think it’s a LTN. Whatever you think of LTNs someone is going to get seriously hurt. Pls replace the bollard and/ or show some presence.

The dad of two expressed concern that children returning to school after half term may "come into conflict with drivers who feel entitled to break the law", and the Monday action reportedly saw two motorists try to drive past the volunteers before turning around when they found their path blocked.

The Oxfordshire Cycling Network praised the volunteers and Cllr Gant, saying: "Great to see Andrew Gant out to support the residents protecting their streets against the criminals who have destroyed bollards and removed signs placed to make these streets safe, and with majority local support.

"These LTN experiments always take a few months to settle in, and sometimes a few people act to disrupt them, but crime that increases road danger is not to be accepted. We hope that action against perpetrators will be swift and severe, before the road criminals injure someone."

Deborah Glass Woodin of Oxford Pedestrians Association added: "The behaviour change needs to be facilitated and it's going to be hard, we get that, but people who walk and people who cycle have been at the mercy of people who drive for decades we just want to redress the balance."

One resident, and 'human bollard' told the Mail's reporter: "When the LTNs first went in, it was incredibly quiet. There were children playing, cycling along the road. There were wheelchairs wheeling through the LTN for the first time. And then the road signs and the bollards were removed. Large 4x4s were coming through at speed. I'm here because that combination of vulnerable road users and fast drivers in large cars is a very heady mix."