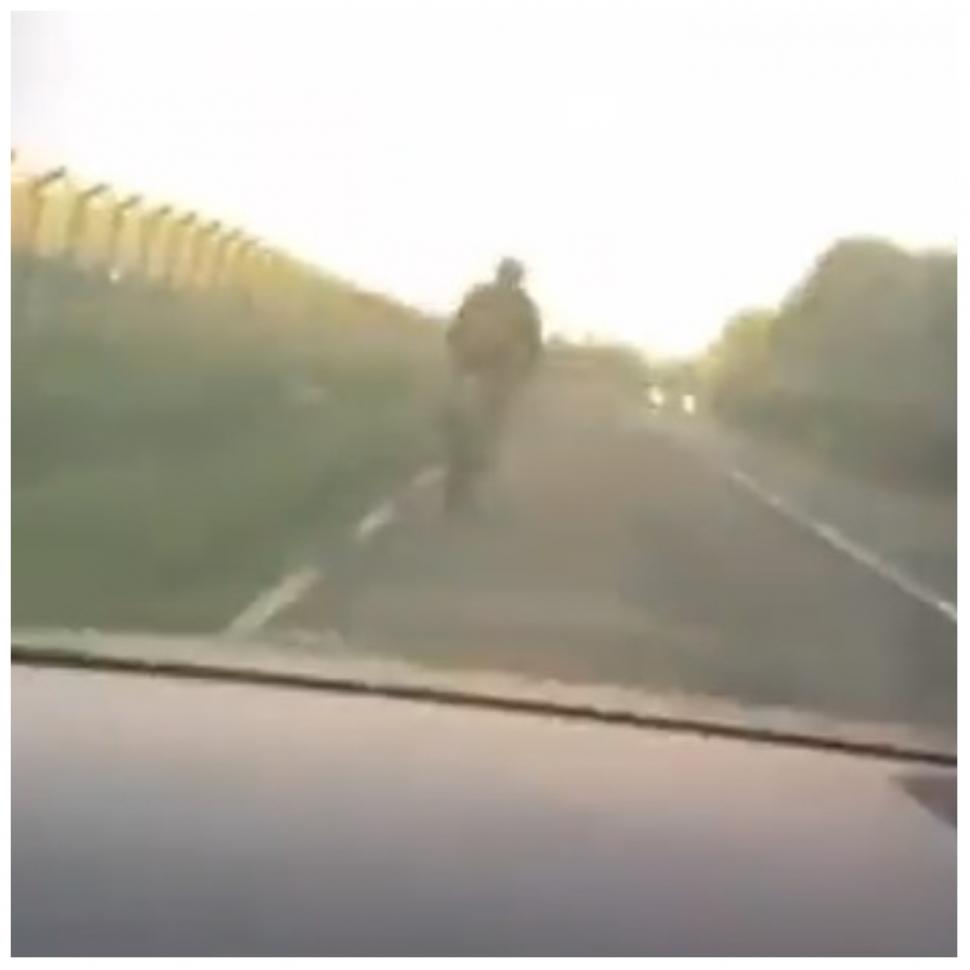 The driver has appeared in court following the incident near Dublin Airport, which was filmed and uploaded to social media by a passenger in the car
by Ryan Mallon

Gardaí investigating a hit-and-run incident in Dublin last weekend, in which a motorist appeared to deliberately strike a cyclist from behind as one of the car’s passengers filmed the collision on their phone, have arrested a man.

As we reported on the live blog earlier this week, the victim was cycling just outside Dublin Airport on Saturday 8 October, at around 7.45am, when he was hit by the motorist, leaving him with what the police have described as “non-life threatening” injuries. The driver fled the scene of the collision while the cyclist, who is in his 20s, was taken to Beaumont Hospital.

Footage of the incident, which was filmed by one of a group of young passengers travelling in the car, was later posted online and has since been shared widely on social media. It appears to show the driver approaching the cyclist at speed as a passenger is heard to say: “Here we go, watch, watch, watch”.

A bang follows as the driver rams the unsuspecting cyclist from behind, before someone says, “Gone, go, we’re gone”.

According to Irishcycle.com, the TikTok account responsible for posting the footage of the collision also features a video of a motorist driving erratically on a Dublin road, running red lights, using the bus lane and weaving between cars.

On Friday, the motorist, who is in his teens, was arrested by Gardaí. He was then charged in relation to the incident and appeared in court later that afternoon.

“Gardaí investigating a road traffic collision involving a cyclist and car that occurred on the Naul Road, Ballymun, on Saturday 8th October 2022, have arrested a man,” a Garda spokesperson said in a brief statement. “Investigations are ongoing.”

The Dublin Cycling Campaign condemns in the strongest possible terms the actions depicted in a recent social media video which appears to show a group of young men, travelling in a car at speed, and knocking a man from his bikehttps://t.co/7RV1Mp5Q0Z

Earlier this week, the Dublin Cycling Campaign released a statement which condemned “in the strongest possible terms” the actions depicted in the social media video, an “assault” they said the cyclist was “lucky to survive”.

In the statement, Dublin Cycling Campaign said: “Fingal Cycling Campaign [a DCC sub-group] has previously written, in May 2021, to Fingal County Council regarding the safety of the roads surrounding Dublin Airport, specifically the R108 and R122.

“The concerns raised in this correspondence have not yet been addressed, and the lack of safe cycling infrastructure is in our view a contributory cause in the incident of 8 October last. That correspondence specifically referred to several unnecessary deaths, including a man out for a cycle in September 2020 and a further death on Tuesday 4 May 2021.

“Dublin Cycling Campaign reiterates the urgent need for safe, protected cycling infrastructure on the R108 and R122. How many more incidents involving death and serious injury will take place before action is taken?

“Dublin Cycling Campaign calls for immediate Garda action on this assault. In addition, we call on Fingal County Council for the implementation of high quality/protected cycling infrastructure on these roads.”

In response, Fingal County Council has told the Sunday World that, while not in charge of the road in question, it has liaised with the DAA (formerly known as the Dublin Airport Authority) “in order to regularise the condition of the road and to consider a cycleway along the route”.

However, the council added that “while the DAA are planning to carry out remedial works along this road to take it to an acceptable standard… we understand they have not included a cycleway in their plans.”

Please note that comments on this story are closed.