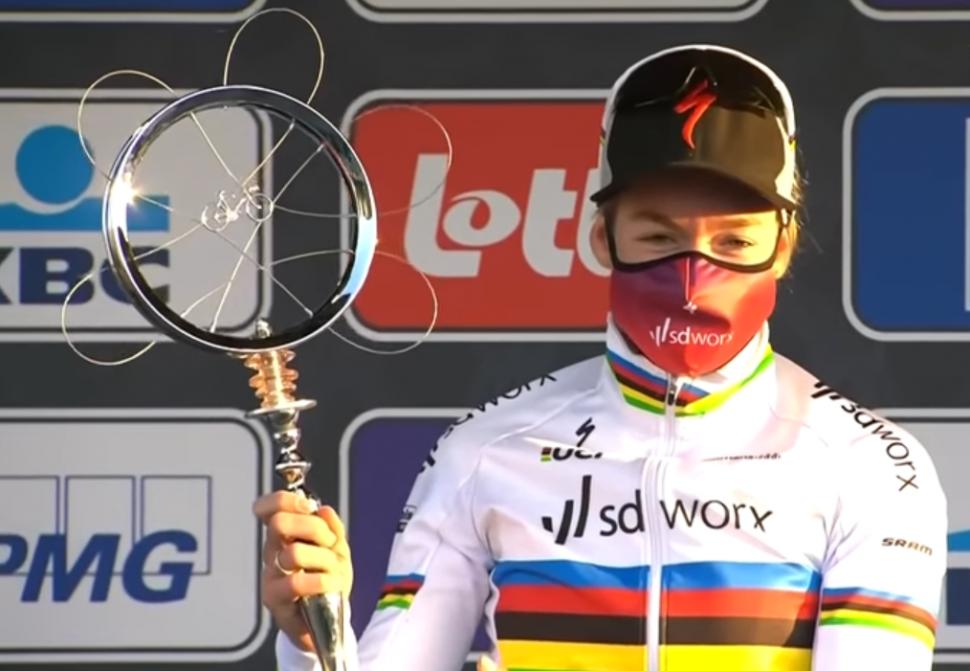 Flanders Classics CEO Thomas Van Der Spiegel says the dispute deflects from steps it is taking towards equality for women's racing...
by Simon_MacMichael

The lack of parity of prize money in men’s and women’s professional bike racing has come under the spotlight once again due to the huge difference in the amounts won by the male and female winners of Omloop Het Nieuwsblad at the weekend – although the CEO of Flanders Classics, which organises the race, says the focus on that issue deflects from other steps that it is taking to try and achieve equality in the sport.

The winner of the men’s race, Deceuninck-Quick Step’s Davide Ballerini, won €16,000 for his efforts as highlighted by an Instagram post from Internationalles, the women’s cycling group who campaign for gender equality in cycling. Parto of this includes their annual ride of the entire Tour de France route, a day ahead of the main race.

The group highlighted that world road champion Anna van der Breggen of SD Worx, who won the women’s edition of Omloop Het Nieuwsblad, got just €930 – just 5.5 per cent of the winners’ pool for the two races.

However, Thomas Van Der Spiegel, CEO of Flanders Classics, defended the allocation, saying on Twitter: “Quite disappointed with all the reactions we are getting about prize money after all the financial investments we have continuously made into women’s cycling for years now.

Quite disappointed with all the reactions we are getting about prize money after all the financial investments we have continuously made into women’s cycling for years now. #OHN21 #OHNWomen

“This year alone around 6 figures were invested into moving the race up a category and into a first time TV production. If equal pay is all you are asking for you clearly have no idea about the challenges women’s cycling is still facing.

“Of course we will keep investing, we will try to stay the driver for change and we will keep pushing for equality in cycling in the near future,” he added.

A lot of the work Van Der Spiegel mentions will be happening behind the scenes, and in not providing equal prize money, many would see the organisation as having scored an own-goal.

For others, however, the real problem lies in the lack of TV coverage that women’s racing receives, and maintain that by increase both the length and quality of that, the sport will become more attractive to sponsors. This could make teams – which operate on shoestring budgets compared to their male counterparts – and riders less reliant on prize money.

Replying to Van Der Spiegel, Eurosport and GCN commentator José Been pointed out: “Increased prize money mostly goes to the same riders who mostly already make a decent pay. Investments in women’s racing and mostly broadcasting benefits many riders and more importantly many teams who are then able to attract more sponsors and grow the sport further."

Dutch ex-pro Iris Slappendel, who co-founded the Cyclists’ Alliance – effectively the women’s pro cyclists’ union, which in 2019 was awarded a $75,000 grant from the Rapha Foundation – said in reply to Van Der Spiegel: “Coverage should be priority to grow the sport. Prize money is an easy ‘target’ and should be higher in the future, but also only benefit the top riders that already make a reasonable income. Live coverage benefits everyone. Good discussion, thanks for the perspective.”

One distinction between the two Omloop Het Nieuwsblad races on Sunday is that while the men’s race forms part of the top-flight UCI WorldTour calendar, the women’s edition is not on the UCI Women’s WorldTour schedule, instead being classified as a second-tier 1.Pro race.

But even when races are at the same tier, there can be big discrepancies in prize money. In 2019, for instance, after winning the men’s edition of the Tour of Flanders, which is also organised by Flanders Classics, Alberto Bettiol said it was a “disgrace” that he received €20,000 for his victory, while the first rider home in the women’s race, Marta Bastianelli, only won €1,265.

UCI President David Lappartient has previously outlined the governing body’s intention for the minimum salary for riders in UCI Women’s WorldTour teams to match that of the men’s second-tier UCI ProTeams by 2023.

Trek-Segafredo has gone beyond that, however, announcing earlier this year that the riders on both its men’s and women’s teams would receive the UCI WorldTour minimum salary of €40,045 for those employed directly, or €65,673 for those who are self-employed.