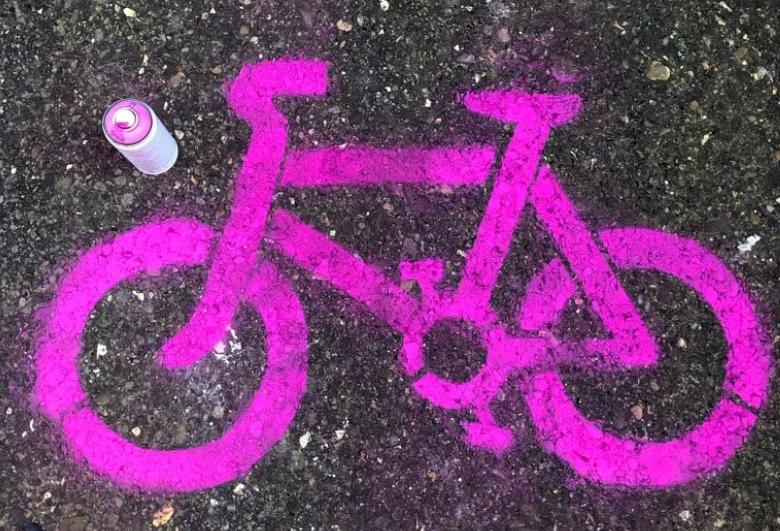 Extinction Rebellion activists will this week create pop-up cycle lanes in towns and cities across the UK and are calling on national and local politicians to do more to create safe space for people on bikes as well as pedestrians.

In what is likely to be the first in a series of interventions in the coming weeks, the group is calling on people to focus on stencilling during this coming weekend, such as spray-painting images of bicycles on the road surface.

One of the main purposes of the planned action this weekend is to highlight that while in recent weeks, air quality has improved as motor traffic has plummeted and many people have moved around by walking or cycling, there is already evidence as the lockdown gradually eases that motor traffic levels are rising sharply.

“Without action now, this could result in not just a return to ‘normal’ traffic, but even higher levels than before,” they say. “The many pedestrians and cyclists who are currently enjoying quiet streets, will once more be forced to revert to our sedentary lifestyles, cooped up in cars or indoors, for fear of the dangerous, polluted world outside.”

While welcoming the £250 million the government has made available for emergency infrastructure in England, and pledges of cash from the Scottish and Welsh Governments for local authorities in those countries, Extinction Rebellion says that the £2 billion pledged for cycling and walking in England over the next five years “is still well short of the £6bn minimum needed to meet the Government’s targets to double cycling trips and increase walking by 2025.

“It also pales into insignificance beside £27 billion earmarked for England’s motorways and trunk roads over the same period.”

The action coincides with the 25th anniversary of the first Reclaim the Streets action, and Extinction Rebellion says it “is not about limiting use of the roads, but opening them up for everyone.”

It is calling on people to create bike-friendly streets on Saturday through the use of stencils (more information on how to do that can be found in this document), with suggestions of locations including:

Polluted high streets where there isn’t enough space for separate cycle lanes - in which case, just use the bike stencil, to show who these streets should be for

A major road with a spare lane or two that needs to be ‘reclaimed’ for safe cycling. Check out these maps of wide roads with high potential for increased cycle use in Birmingham, Bristol, Cambridge, Leeds, Leicester, Liverpool, London, Manchester, Newcastle or Sheffield.

On Sunday, people are encouraged to celebrate by taking to the streets they have reclaimed on the Saturday, while adhering to social distancing rules and wearing PPE, with Extinction Rebellion urging people to:

Ride the streets that you have painted the previous day.

Have a meeting point that allows you to stay socially distant like the local park. Decide on the route and end point in advance.

Arrive on time to avoid being accused of congregating.

Quoted on i News earlier this week, Extinction Rebellion’s Caspar Hughes, said: “We need to be highlighting to local authorities which are doing nothing that they have just got weeks now to prepare city and town centres to make it safe for people to get out and [remain] physically distanced.

“We need to highlight the depth of the problem. Virtually every town and street with any public facility - whether that is a shop or a pub or a library - will need to be changed to allow people to walk and physically distance safely.”

As we’ve reported extensively here on road.cc in recent weeks, a number of towns and cities are rushing to build pop-up cycle lanes as the lockdown begins to ease, to relieve pressure on public transport and encourage people to cycle to work.

Mayor of London Sadiq Khan, who today announced plans to close a number of major roads within Central London to motor vehicles, said of Extinction Rebellion’s plans that “"any unofficial action could jeopardise this and put people in danger.”