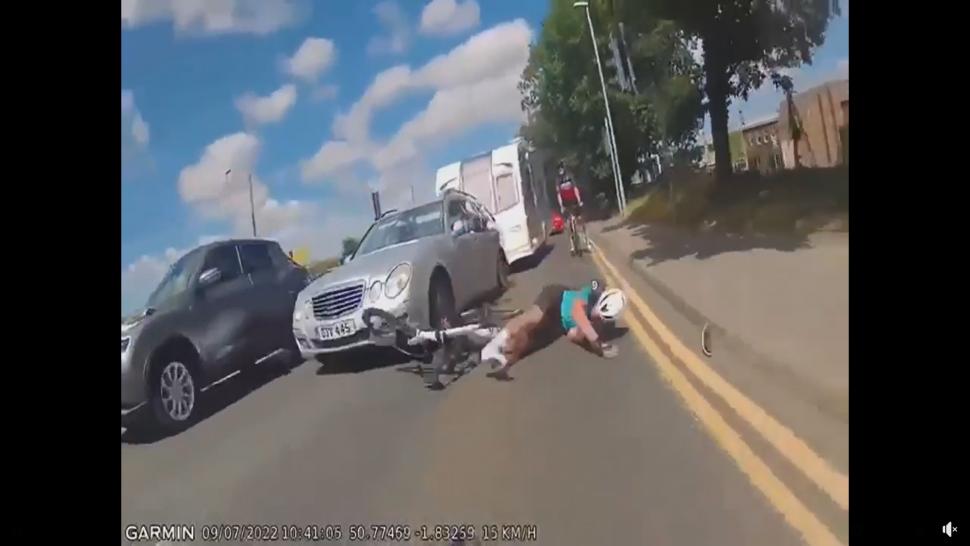 Dorset Police confirmed it is investigating a collision involving a motorist towing a caravan and a cyclist near Bournemouth Airport last weekend, footage of which has since gone viral and been viewed thousands of times on social media.

On Friday's road.cc live blog we shared the footage, posted on Facebook via Car Anything, with the reaction prompting us to get in touch with the relevant police authority for an update.

Dorset Police confirmed officers attended a report at 10.43am on Saturday 9 July 2022 of a collision involving the driver of a car towing a caravan and a cyclist on Parley Lane in Christchurch.

The collision came at the end of the footage, moments after one of the other cyclists in the group's rear-facing camera had recorded the driver apparently sounding their horn as they overtook the group, who were travelling at close to 40km/h.

As the group filtered to the front of the queue at the traffic lights, and past the motorist, one rider can be heard saying "I got him on video", while someone else is heard saying: "F****** idiot".

Then, as the group rolls away from the stop, the driver continues forward closely behind the penultimate rider, hitting their back wheel. Dorset Police confirmed the cyclist suffered minor injuries but did not require hospital treatment.

In the footage, after colliding with the cyclist, the caravan-towing motorist is seen driving over the rider's bike and out of shot. It is not clear if the motorist stopped at the scene of the incident.

Dorset Police received a report at 10.43am on Saturday 9 July 2022 of a collision involving a car that was towing a caravan and a cyclist on Parley Lane in Christchurch. Officers attended the scene.

The cyclist sustained minor injuries that did not require hospital treatment. An investigation is underway to establish the full circumstances of the collision and enquiries are continuing.