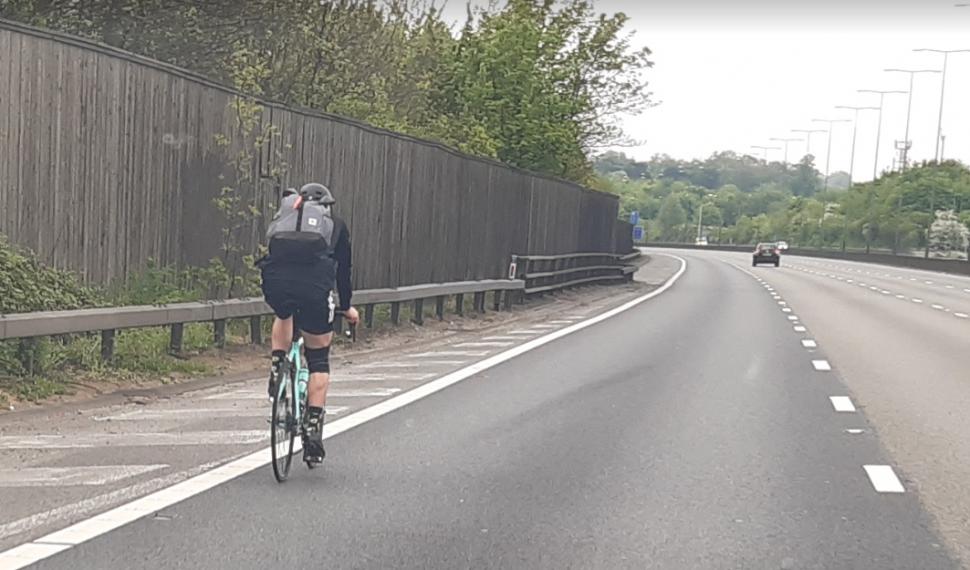 The country’s motorways may be a lot quieter now, but it’s still illegal to ride a bicycle on them – although as one road.cc reader discovered, that isn’t deterring some from taking to the M25.

The cyclist Phil snapped on the motorway at 8.30am on Friday morning is the second he has seen there in recent weeks.

He saw the rider close to junction 9, heading south towards junction 8 for Reigate.

“I'd pulled up behind him, and slowed down as there were a few artics at the junction,” he explained. ”He seemed to be quite happy.

“I drew up alongside and shouted at him that did he know he was on a motorway? He kind of looked surprised and pulled off on to the hard shoulder.

“I didn't stop, but called 999 at the next junction. The Police were aware and had sent a few cars out.

“Since lockdown this is the second cyclist I have seen on the M25. Just nuts, and I have no idea why they do it, he added.

It’s not the first time this year that a cyclist has been spotted on the busy motorway in the same area.

In January, Highways England used overhead warning signs between junctions 8 and 9 of the M25 to alert motorists to the presence of a rider.

The signs read, “Cyclist in road – slow” and instructed drivers to cut their speed to 50mph.

Traffic police were alerted but were unable to find the cyclist.

Following the imposition of the lockdown last month, a cyclist in Cheshire was told by police, “This does not constitute your daily exercise,” after he was caught riding on the M60.

> “This does not constitute your daily exercise,” police tell cyclist stopped on M60

And last week, the North West Motorway Police team posted a photo to Twitter of a woman pushing her bike along the M57 while “taking her daily exercise.”

Officers said that she was safely taken off the motorway and reported for the offence.