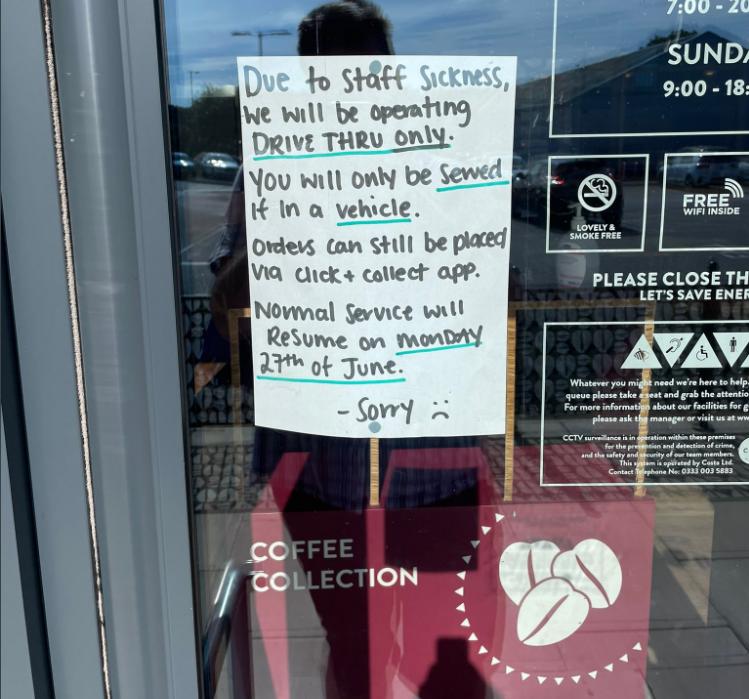 An employee allegedly told the cyclist that bikes weren’t permitted as “they’re not road legal, taxed or insured”
by Ryan Mallon

A cyclist has claimed that they were refused service at a Costa drive-through – when the shop itself was closed due to several staff being sick – as it is company policy “not to serve people on bikes”.

Liam, a cyclist from Aberdeen, says that an employee at the coffee chain told him that bikes were not permitted in the drive-through lane as they are ‘not road legal, taxed or insured’. In protest, the cyclist then blocked the drive-through, prompting Costa’s employees to call the police.

While many chain restaurants and coffee shops operate a no-bikes policy in their drive-throughs (usually on health and safety grounds), Costa’s refusal to serve Liam, which he has since shared on social media, has been described by some Twitter users as “absolutely shameful”, though others have described the cyclist as “self-righteous”.

Being refused service because I’m on a bike @costacoffee That’s fine, I’m just going to sit my ground and block your drive thru. pic.twitter.com/GNqauVL5sk

The incident occurred on Friday evening, on the corner of Wellington Road and Abbotswell Road in Aberdeen, as Liam visited Costa while shopping.

Leaving his bike in the racks provided – which, he says, can only be accessed by riding on part of the drive-through lane – Liam approached the shop to find that, due to staff shortages owing to sickness, Costa was operating a drive-through-only service, with the sign attached to the door reading: “You will only be served if in a vehicle”.

“I then hopped on the bike and rolled up to the order point where I was met with a cheery hello,” he tells road.cc.

After submitting his order, Liam approached the collection window, where he says he could see the employee’s “face drop”.

“She then approached the window and said they weren’t serving me as it was company policy not to serve people on bikes – exact words.” According to Liam, another staff member arrived and politely apologised, before insisting that they were forced to adhere to Costa’s guidelines, “as a car could come up behind and hit you”.

The cyclist – wary of motorists who were being told to pass him – then moved his bike into the middle of the lane, effectively blocking traffic.

“This is when things got a bit absurd,” he says. “She told me that bikes aren’t allowed because they aren’t road legal vehicles and because they’re not taxed and insured”.

> Costa Coffee offers bizarre excuse for refusing to serve people on bikes at drive-through (then backtracks, but you still can't get coffee)

The staff member’s explanation for refusing to serve people on bikes echoes the excuse used by Costa’s social media admin in 2020 when questioned on the company's policy.

The admin claimed that the chain “can only allow road worthy, taxed and insured vehicles through the lane”, and told a cyclist they couldn’t use the drive-through because “you’re not taxed or insured to be on the road”.

He then swiftly backtracked on the tax and insurance comment, but maintained that cyclists were not permitted on health and safety grounds.

Liam’s lengthy protest brought the drive-through system to a halt and resulted in a visit from the police, who he claims referred to him as “pathetic” and a “loser” with “nothing better to do on a Friday night”.

“The cops said ‘if we turned up by bike they’d refuse us too and that’s just how it is’”, Liam said.

Bet they would serve a police cyclist in uniform ...🤔 I can understand the health and safety implications of having pedestrians standing in the road with vehicles but as cycles and motor vehicles use the same roads all the time it seems a little bizzare, strange risk assessment.

The cyclist also claimed that, in order to deal with the disruption and to continue serving customers, Costa staff were taking orders and receiving payment at motorists’ cars.

“Had they actually suggested this to me I would have done it,” he says.

“They flatly refused to serve me but yet they bent over backwards to facilitate those arriving by car.”

A Costa spokesperson told road.cc: “We can confirm that an incident took place at our Abbotswell Road store on Friday, which is temporarily operating for Drive-Thru and Click & Collect only. We are sorry for the inconvenience caused whilst our in-store area is closed.”

The spokesperson confirmed that “the store team followed our policy of not serving cyclists in the Drive-Thru as a safety precaution, and the customer was advised of this when visiting the store.

“The team offered to serve them via Click & Collect from the front of the store – which is the same service they offered other customers that were on foot whilst the in-store area is closed.

“Unfortunately, the customer chose not to do this and instead blocked the lane for around an hour during which the police attended the store.

“Our number one priority is the health and safety of our customers and team members. Like many retailers, Costa Coffee does not serve cyclists using the Drive-Thru lane or Drive-Thru window.

“Our Drive-Thru lanes are designed for motor vehicles only – they are not designed operationally or from a safety perspective for customers on bicycles or on foot.

“Notably, our order process is triggered upon a motor vehicle approaching the order point, and there may also be limited visibility of cyclists whilst in the lane or near other vehicles.”