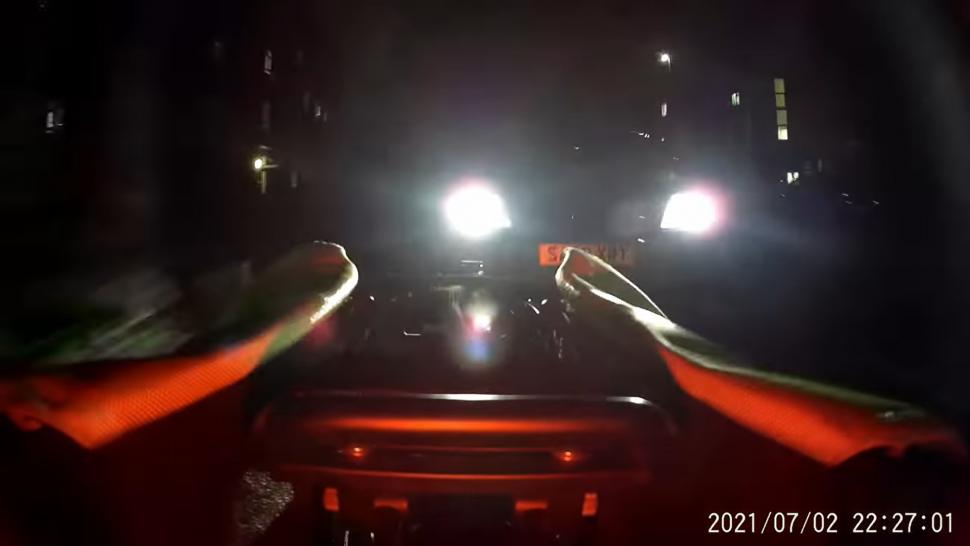 "I have no doubt his intention was to kill me": Aggressive kerb-mounting driver tries to ram cyclist off bike after being caught using phone

Police fail to catch motorist... but tell rider to not film phone-using drivers and "always ride as close to the kerb as possible"...
by Dan Alexander

A London cyclist has recalled the frightening moment a driver and passenger, angered by the bike rider recording the motorist using their phone, chased after him and tried to ram him off his bike.

We shared a video of the incident, which happened last July in Forest Hill, south London, on our live blog yesterday, but got in touch with the cyclist involved to get more details about the shocking footage.

Understandably, the rider did not wish to be named, but noticed a driver on their mobile phone as they cycled past Forest Hill station. Deciding not to ride in front of a distracted road user, the cyclist waited, catching the act on a GoPro camera mounted to their handlebars.

"Because of my bike lights the driver noticed me, and asked if I was filming him," the cyclist recalled. "I didn't want to engage and he asked me again, I said it's always filming and that he shouldn't be using his phone."

Having turned around into a side road the road.cc reader noticed the driver entering a car park before following him.

"At this point I began to cycle away as fast as possible and I shouted for help from the pedestrian who was walking ahead of me," they continued. "As I turned around the corner the driver carried on shouting at me. I made out 'give me the camera and slap him up' he then jumped onto the pavement to try and knock me off as I was cycling away (he was inches away) and luckily because of a tree I had some more time to escape.

"I suspect he decided to stop to pick up his passenger whom he had left behind. At this point I was keen to not repeat my previous mistake and looked behind me in order to make sure I wasn't being followed before hiding my bike behind a car in a nearby driveway before jumping into a basement in order to wait for the police to arrive."

Once the police arrived, the footage was turned over and the cyclist escorted home by officers. Later, a detective got in touch to say they had no leads and the number plate did not match the driver.

The detective then imparted some unconventional advice on how to stop aggressive drivers trying to knock you off your bike.

"I was then told over the phone by the well-spoken detective, and in email, to not film phone-using drivers and to call the police (which as we know would never work) and to be the 'the most polite cyclist on the road and to always ride as close to the kerb as possible' I was also told to only use my cameras incase of an incident where I am physically collided by a driver," the rider recollected.

"A while afterwards I received an email stating that the case had been closed pending further evidence. I remain in hope that this criminal is identified as I have no doubt that his intention was to kill me, as evident by his words and actions.

"Even if there had been provocation, as some ignorant commenters have suggested, it would still not come close to justifying attempted murder. To make it all worse the driver must have known he would not be identified from the footage, making the whole ordeal more pointless for the driver as he would have not faced justice for the phone-driving offence on its own."