It's Thursday and Dan Alexander is here for the penultimate live blog of the week... 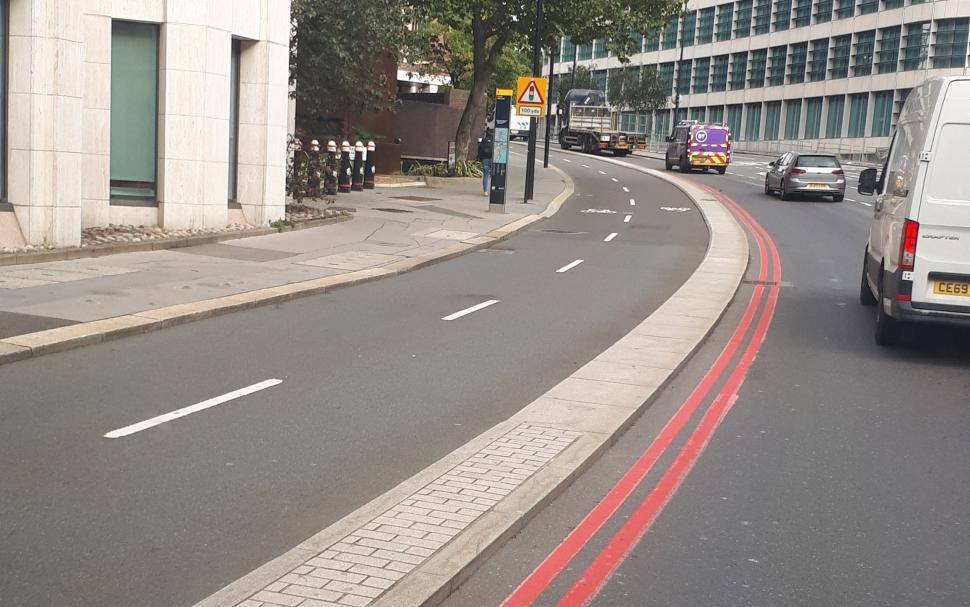 More on this in the AM.

For balance - here a picture of a road with no carists actively using it. So they won’t be needing that any more. Store you cars on your own land. pic.twitter.com/jqzyApOjTV

Let's have a bit of reaction to the main story of the day...

A few people on Facebook wondered if the empty oncoming lane in the photo needs to be ripped out too? Mat Scalpello went further and wondered if the pavement should go too.

Kevin Blackburn made the point that what's more important than photos are the numbers..."You can take photos at chosen times to prove anything - the important things are, where they have them, to look at the counters! More bikes than cars pass many points!" Under the blog, hawkinspeter wrote: "Everywhere I go, I see empty cars left parked on the sides of roads. We might as well turn over all the road space to bikes if drivers aren't bothering to use them."

Rendel Harris added: "Although Vine is well-intentioned in this instance, the message isn't really correct: he appears to be saying yes I know the cycle lanes are empty at the moment but you wait until people get more confident, whereas in fact the Tower Hill cycle lane is very heavily used by people working in the City and beyond, of course it's quiet during the day because they're all at work. Hopefully they will get even busier as more people realise how safely they can get around London with these lanes, but they are already more than justifying their existence, it doesn't "take time", it's already happened."

EK Spinner said: "The way I see it, the bike lanes are empty because the cyclists have completed their journey efficiently already, while the drivers are still stuck in a jam."

WOW!!! Britain's Matt Walls an Olympic hero for his country, has won the Italian classic Gran Piemonte!! What a victory that is !! https://t.co/yORXPpIoN8

The finish was slightly marred by some questionable routing in the final kilometres which made the sprint messy and dangerous. When the road did straighten up, Walls held off former European and Italian champion Nizzolo for his second win of the season.

After all the Cav excitement it fittingly came down to a big bunch kick in Southend-on-Sea. Team DSM's Lorena Wiebes won the sprint, the third stage win in a row for the Dutch. Yesterday's winner Demi Vollering was unchallenged and keeps her likely unassailable 1:09 advantage.

Chiara Consonni and Chloe Hosking rounded out the top three on the day. Alice Barnes took a third top-ten of the week, finishing eighth. On the menu tomorrow is another flat stage as the riders stay in Essex for the 95km run from Colchester to Clacton-on-Sea.

First, he was spotted in London wearing full kit. Now, it's on the roadside at the Women's Tour. Good to see one of the biggest names in men's cycling out supporting the women's race.

I spied him too👍🏼 pic.twitter.com/sHoCDswslr

Decathlon and Cofidis are back working together, 17 years after the French brand last made the the pro team's kit. Cofidis riders will wear the brand's Van Rysel kit in 2022 and 2023, a deal which came about thanks to the two parties' ability to collaborate from their close bases in Lille.

The team's general manager Cédric Vasseur said: "We are very happy with this new partnership; all the riders and staff are ready to mobilise alongside the brand which has the will to be a major player in its market. This collaboration makes all the more sense since we are two French companies, from the same Hauts de France region.

"This geographic proximity is a major asset of this new partnership and will help bring our two entities closer together. Van Rysel has a strong ability to develop and design the best products to allow it to shine in the most prestigious competitions on the calendar. It is therefore a winning partnership on all fronts that will contribute to the expansion and future success of the Cofidis Team."

Van Rysel director Nicolas Pierron said he hopes the partnership will help the brand use Cofidis' expertise to develop better products for Decathlon consumers too. 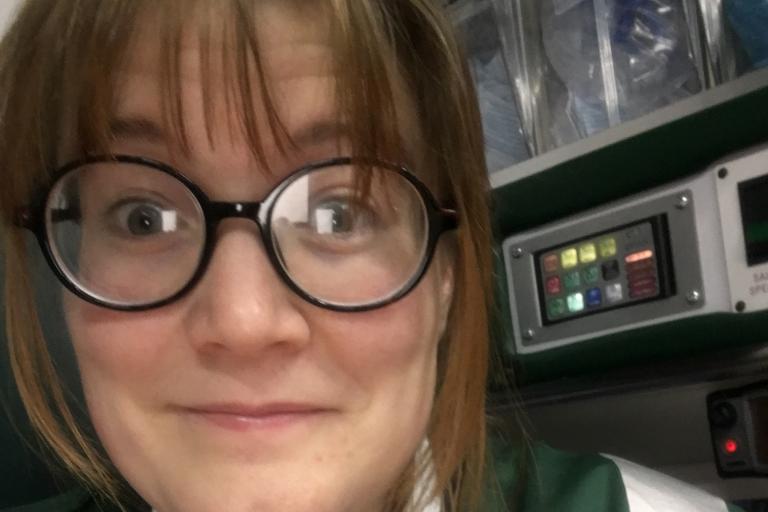 I am not riding home ‘cos my front bike light is dead. So instead I am on a train, gazing at the bike i have ridden for the last decade and a half. Is it too weird to say that I actually love it? Like I guess I’d love a dog if I had one. Is that OK? pic.twitter.com/iyD9xcg1ev

Ned quickly caveated his love letter with a promise he'd look at the saddle angle. Always good to get in before the Twitter mechanics have a pop. In his own words, it's all about character, not performance. I don't think he'll have too many people here thinking loving it is weird...

If you haven't already, be sure to catch up with our Drink At Your Desk episode with Ned below.

Deceuninck-Quick-Step have released this behind the scenes look at how Yves Lampaert came fifth at Paris-Roubaix. A little more luck and the Belgian may have finished higher. The highlight here is the close up shots of the mud-caked kit...definitely a good day to be sat on the sofa.

Never would I thought I’d hear myself say those words.

It should be a sprint in Southend-on-Sea today. Alex Dowsett's more interested in what time they clock for part of the Maldon 10 course. If you live in Shoeburyness, and you weren't at the roadside half an hour ago, you've probably missed them. Regardless, we'll keep you updated on stage four here on the live blog.

A city in Denmark is playing a trick on drivers and cyclists to get them to slow down. pic.twitter.com/zECIEWBCPL

Let's give a warm welcome to Cherie Pridham, who will become sports director at Lotto Soudal next year 🙌

Cherie Pridham is staying in the WorldTour next year. The former Kuota-road.cc team manager, yes that was a thing, is joining Lotto-Soudal for 2022.

"If you can’t beat the Belgians, join them," she said on her move. "It was absolutely not on my radar to direct a Belgian team, but when the Lotto-Soudal project was presented to me, I was immediately charmed by it. I raced a lot in Belgium. I know how much cycling means for Belgian people. I am not afraid, I am ready to make a positive contribution to the team’s future."

Pridham became the men's WorldTour's first female sports director when she joined Israel Start-Up Nation at the start of the year and was in the team car for Mads Würtz Schmidt's win at Tirreno-Adriatico. We spoke to her on Drink at Your Desk Friday when she told us she'd never seen an athlete with the same mental strength as Chris Froome. After a gruelling season of cyclo-cross and road racing, Wout van Aert is taking a well-earned rest. And by rest I mean smashing out 11km runs at a very impressive pace. Not quite Tom Pidcock speeds...but fast enough.

It can't be long before Mathieu van der Poel's programmers work out how to get a sub 10-second 100 metres out of him. Unlike Pidcock's, Wout's run is as legit as they come, holding a steady pace for the full seven miles and no dodgy GPS lines. Take a break, Wout. You deserve it...

Back in February, Tom Pidcock managed to hilariously wind up the entire running community by claiming to have run a 13:25 5km, just five seconds slower than Marc Scott's British record and 30 seconds off world record pace. It was all a Garmin GPS error, but the meltdown from runners everywhere was quite entertaining.

The cyclist and the moose. pic.twitter.com/lfDVA6nrpd

Moose on the Loose was such a hit success they've released a sequel...

Firstly, how ridiculously big is that moose? Secondly, I reckon this cyclist got the best realistic outcome from this situation...Thirdly, will there be a trilogy?

Watch out for the bears too. I'm still thinking about that drone footage of a black bear chasing a mountain biker in Montana...

We've had ostriches before as well, although presumably not in the US.

What's the most hair-raising animal encounter you've had on a bike? Britain's going to seem pretty tame if we all say squirrels.

Regarding cycle lanes, there are THOUSANDS of people who will not cycle around their city until it's safer. So the lanes have to be built first, and then we have to wait a while for them to get their confidence. So please stop with the “empty lanes” thing. It takes time. ❤️🚴🏼

Jeremy Vine is back making the case for cycling infrastructure to his 770,000 Twitter followers this morning. The presenter asked for patience and for people to "please stop with the 'empty lanes' thing".

On Tuesday, we shared a tweet from a motorist complaining about empty "oversized bike lanes" as they sat in a queue of motorists next to a two-way cycle lane. The post attracted criticism from many saying it summed up some motorists' willingness to blame cyclists and cycling infrastructure for congestion caused by the amount of vehicles on the road. Later that day we had a higher bid at the 'silly things being said about cycle lanes' auction when a cabbie blamed the Hyde Park infra for flash flooding...

Saying “there aren't enough people on bicycles to justify building a cycle lane” — known as the Kensington Argument — is like saying you need to wait until planes are in the air before you build airports. @willnorman @SadiqKhan @HounslowCycling @WeAreCyclingUK

You might think with Vine's online reputation for championing all things cycling that he might have been preaching to the choir with this one...a quick dip into the replies shows otherwise...bingo cards at the ready:

None of the things you say here have any real factual basis. You are entitled to an opinion, but forming ones out of thin air & prejudice isn't a sensible way to live your life. And broadcasting them on twitter doesn't make the world a better place.

This next one's from someone claiming to be a solicitor...

And a number of cyclists still insist on ignoring the specially built super safe cycle lanes and block the narrow car lanes for drivers who cannot safely over take them.

Maybe drivers could pay road tax too, as it was abolished in 1937. Vehicle excise duty, which you have incorrectly named, is levied according to emissions. Drivers of electric cars and cyclists therefore pay £0.00. But you know this.