Energy gels and lost GPS data as The Simpsons parodies cyclists; 'I peaked as a dad at this point': The £19.99 Cervélo balance bike; First female DS in men's WorldTour; Anti-LTN group blame road closure for crime and guns + more on the live blog 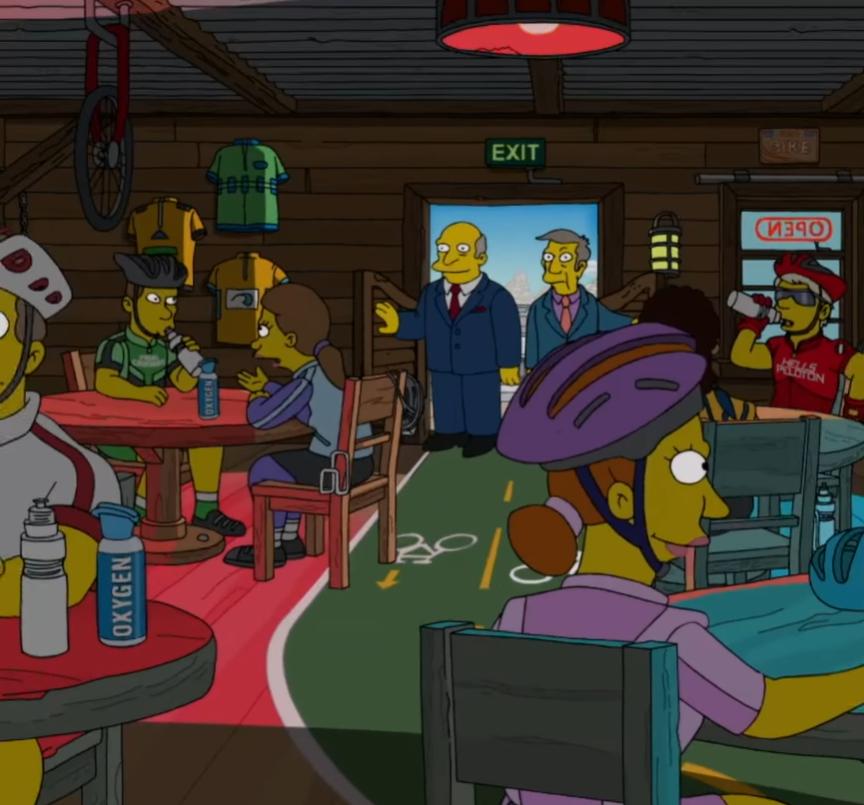 Last week's episode of The Simpson's parodied the world of cycling with an amusing trip to a biker bar called 'The Greasy Chain'. More Hells Peloton than Hells Angels, the bar Skinner and Chalmers visit only serves energy gels and oxygen and the pair get into trouble after knocking over a line of GPS computers charging at the bar. "The bike computers! Our stats were on there! They hadn't synced yet," the cyclists complain.

"Yeah but you still got the exercise right?" Chalmers replies while being chased out by the angry mob...

You can read the full story on ebiketips. 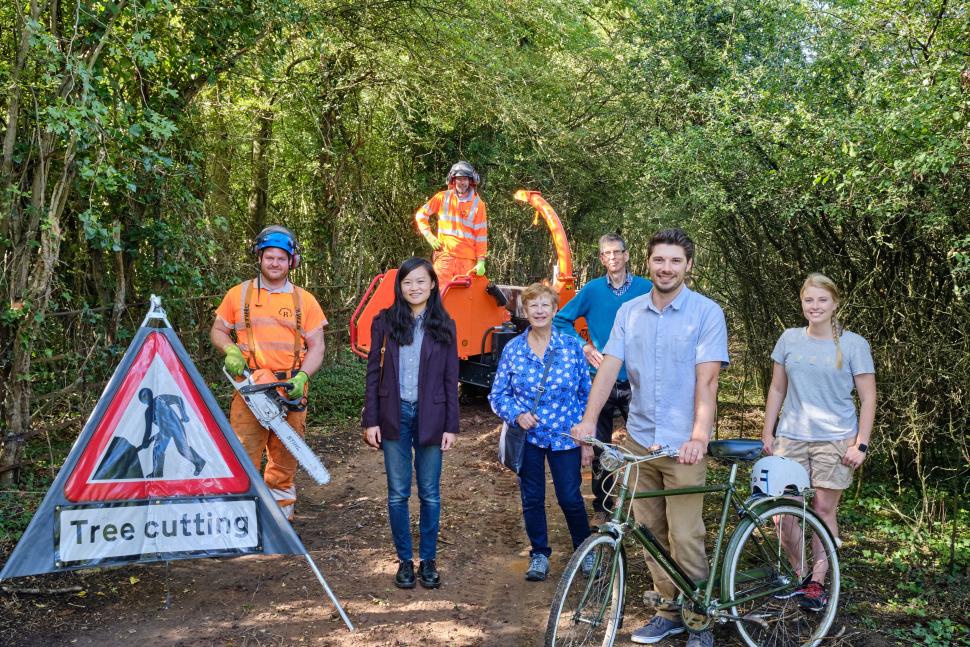 Walking and cycling charity Sustrans has submitted a planning application to turn a section of Route 41 between Leamington Spa and Rugby into a 6km off-road track that will be Warwickshire's longest traffic-free greenway.  The route, also known as the Lias Line, was identified as very poor when Sustrans reviewed the National Cycle Network last year with much of the off-road sections overgrown and poorly surfaced.

The work on the project is expected to commence in April 2021 with phase one seeing the creation of a new sealed surface off-road stretch of track on the route of the old Lias Line railway between Offchurch and Birdingbury. Two further phases would then begin, subject to funding.

Sustrans have submitted the planning application to the three local authorities the route will pass through with Startford-on-Avon taking the lead on the application. Sustrans Senior Network Developer, Carmen Szeto said: "The National Cycle Network belongs to everyone and it can help all of us to lead happier, healthier lives. That’s why I’m so excited by this project which will transform cycling and walking in Warwickshire. Clearly, we have been delayed by the pandemic but we’re now back on track and raring to go. Throughout this project we’ve worked closely with the local community to ensure we have a project which works for everyone. So we want everyone to have their say on this application so that the result is something truly special which we can all be proud of.” 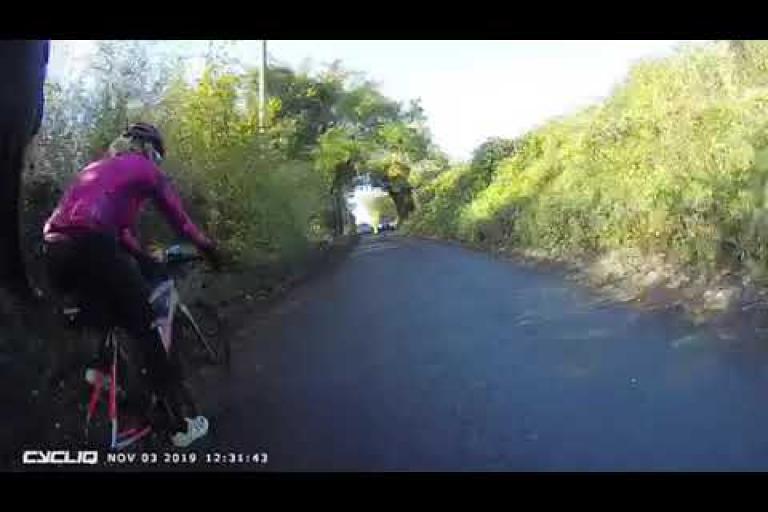 Near Miss of the Day 506: “The wing of the car brushed against me” 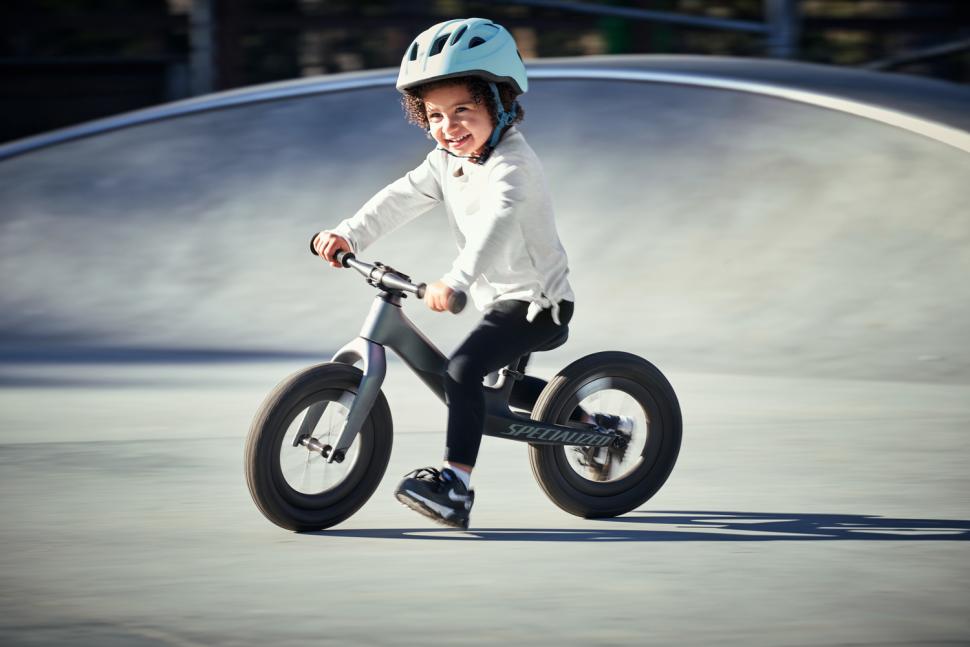 Yesterday, we showed you possibly the coolest balance bike going as Specialized released a 2kg carbon bike that could be bought, if it hadn't sold out, for the princely sum of £999. But does a toddler really need a weight-saving carbon frame? Check out this paint job Sam Shaw gave his son's bike for an estimated cost of £19.99...

Although, further to my last tweet, I did do this when my lad said he "wanted a #bike like daddy's". I regret nothing. #cycling pic.twitter.com/VlLZ9GZcb8

One second-hand balance bike that cost a fiver some sandpaper and a couple of cheap cans of spray paint was all that was needed to create this masterpiece. And it seems Sam's skills have been attracting attention from other fathers looking to get their son a cool looking bike (spoiler alert: it's not for the kids). Bill Stewart asked: "Cracking job! Can you build one for a 6’2” 39 year old Driller working offshore Brazil so he can ride with me when he gets home."

Superb! Good job yours wasn't a Specialized though - they'd have sued. 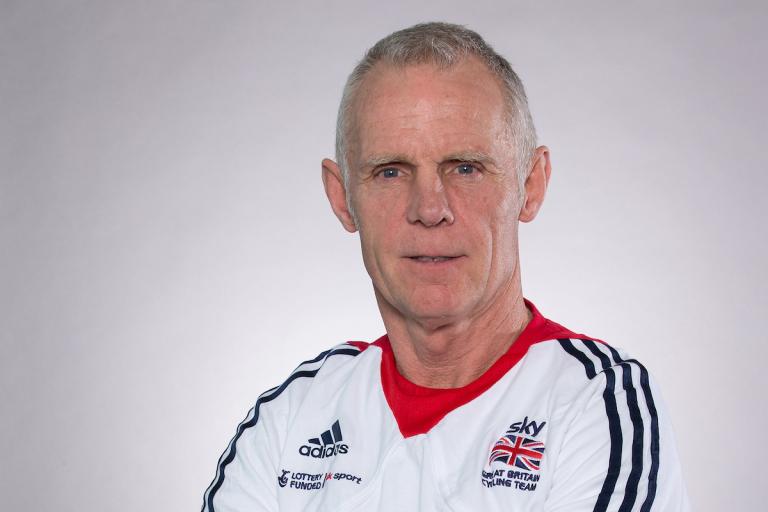 The news of Cherie Pridham's appointment as directeur sportif at Israel Start-Up Nation brought a smile to many at road.cc who remember the days of Kuota-road.cc. That's right, in 2010 we sponsored a cycling team here in the UK and Cherie was team director. 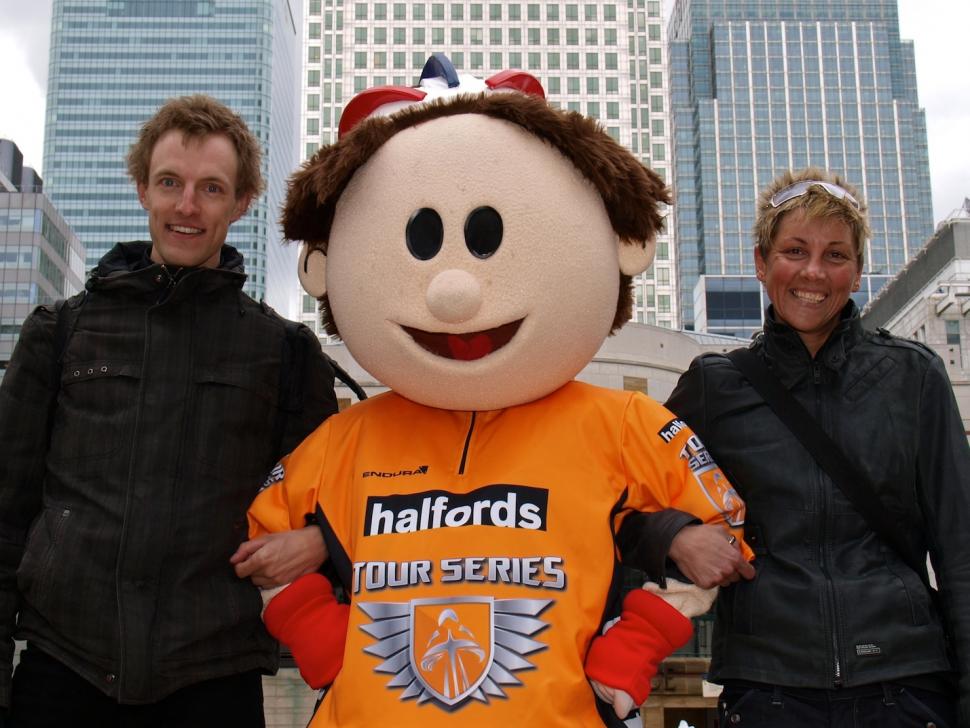 Now she's made headlines after becoming the first female directeur sportif in the men's WorldTour with Israel Start-Up Nation. Excited by the move, she said: "I feel truly proud and privileged to be the first woman to serve as a sports director at the WorldTour level, joining one of the best teams in the world and being entrusted with great and legendary riders.

Sure they haven't become Team Sky?

Plenty of our readers have spotted similarities between Team DSM and Team Sky kits of old...

Saved a few pennies on a full respray

Sunweb have ended their title sponsorship of the team, with Dutch State Mines (DSM) taking over. The announcement was made at the team launch for 2021 and shows the new Team Skyesque black and blue colour on their kits, Scott bikes and team car. Sunweb remain a partner but both the men's and women's WorldTour teams will now be named after the 'global science-based company' DSM.

Sunweb had a successful final campaign under the old banner, winning three stages of the Tour de France as well as Jai Hindley's second-place on GC at the Giro d'Italia. Romain Bardet will join DSM for 2021 and provides added depth in their GC ranks following Wilco Kelderman's departure to Bora-Hansgrohe.

Interestingly the team will now make their own kits and won't rely on commercial brands. Team DSM’s Head of Science, Narelle Neumann said: "Having the highest demands when it comes to equipment and material, it has been a long-cherished ambition for the team to be able to facilitate a customised clothing solution.

"We are extremely pleased that we are now in a position to realise that as we take on this new challenge of producing our own bespoke race apparel. In close collaboration with DSM and Bioracer, our new race wear will facilitate better performance. By stepping away from commercial brands and using new cutting-edge technologies, simply put, we want to produce the very best and fastest race clothing for our riders – without compromises. We are confident that this is a step that will definitely deliver a competitive gain.” 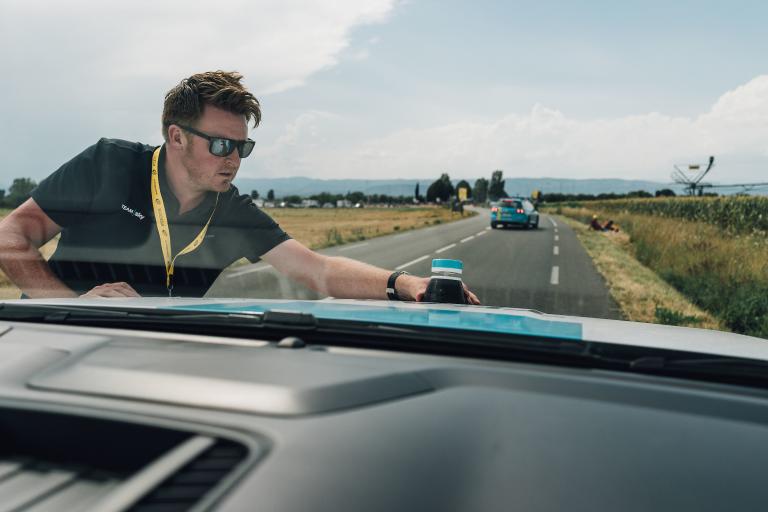 McLaren is ending sponsorship of team which will become Bahrain Victorious
0
04 December 2020, 10:45
Community rallies for cycling charity after van is destroyed in fire

Big thanks to @Leicester_News from @LeicesterWFA for allowing us to use a council van for events whilst ours is, um, indisposed.. pic.twitter.com/TKvCjY8eOb

Leicester cycling charity Wheels for All were devastated to find out the van they use to collect cycles was destroyed in a fire. The charity runs inclusive sessions to support anyone with different needs, regardless of age or ability gain independence through cycling. The Leicester Mercury reports the van, which the charity uses to transport their fleet of bikes, was gutted by a fire last week.

However, Wheels for All received a helping hand from Leicester City Council who have loaned a van while a permanent replacement is sorted. Chairman of the charity, Peter Simmonds was grateful for their support: "This will enable us to lay on sessions for our clients and bring them some much needed fun and exercise in the run-up to Christmas.

"I’d also like to thank Midland Tail Lifts as well, for offering to fit a tail lift on a replacement van free of charge and and to the organisations around the country offering a similar service to ours, who have given us practical and moral support. It's given us a real boost after the shock of seeing our van go up in smoke.

"The van was insured, and we are awaiting an update from our insurers but whatever the result, we will have to pay an excess, and our premiums, which already form a large part of our expenditure, are bound to increase. Any help would be gratefully appreciated." 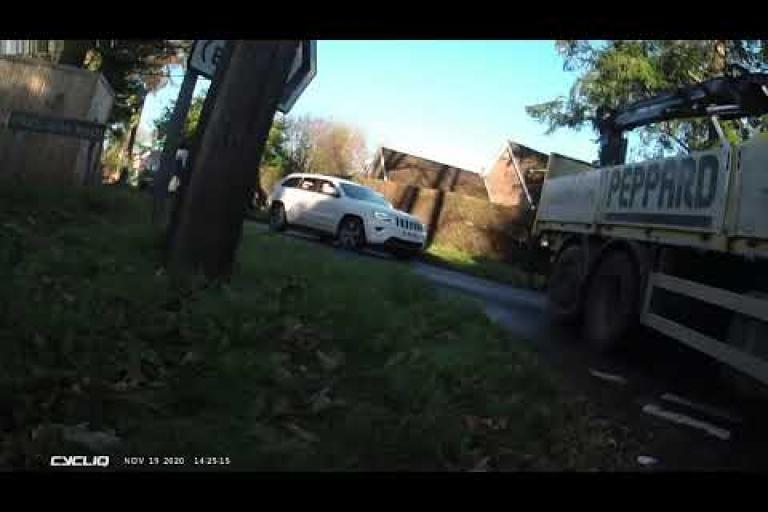 Near Miss of the Day 501 (UPDATED): HGV driver said he had to cut corner because of fast oncoming traffic

Our regular series featuring close passes from around the country - today it's Oxfordshire
75
04 December 2020, 10:08
Chris Froome's good deed for the day

Rescued this little guy from getting run over, anybody know what it is? 🐍 pic.twitter.com/kppPiAQTe9 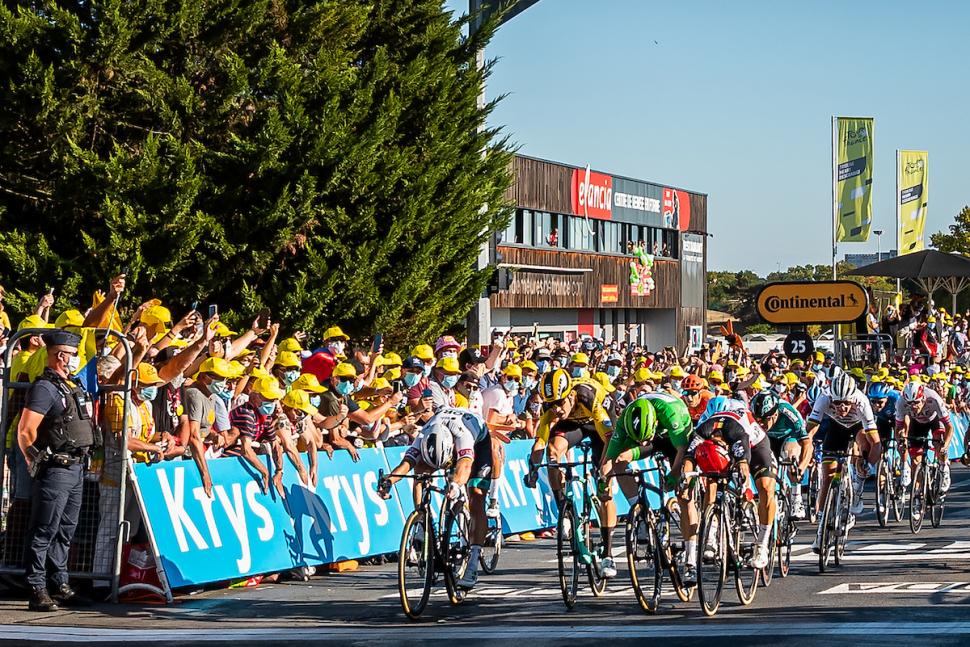 Speaking to AD.nl, former WorldTour sprinter and five-time world champion on the track Theo Bos, suggested no passing zones would help improve rider safety in bunch sprints. By creating a sprinters' zone next to the barriers in the final 300m, Bos believes you could stop dangerous overtaking manoeuvres and reduce the amount of crashes. The first rider to the sprint zone would not be allowed to leave it and therefore avoid riders moving across the road during the sprint.

"No more wild west in the bunch sprints, with officials interpreting it only a little loosely, but few rules that everyone understands and that everyone can enforce," Bos said.

"This [no passing zone] prevents riders from swerving all over the road - sprinters, but also lead-outs. If you are at the head of the peloton at 300 meters in the sprinters' section, then you stay there. Leaving gets you relegated. If you overtake riders from behind, you are allowed to leave the box, otherwise you cannot pass in it.

"You can no longer dive into small holes, like Sagan in the Tour. But you also no longer get the situation that the front rider slams the door - with all the consequences that entails. Anyone who passes between the rider and the barriers in the sprinters section will be relegated."

Bos believes new rules are needed following a year marred by sprint incidents, the most notable of which was the terrifying crash at Tour of Poland involving Fabio Jakobsen and Dylan Groenewegen. Sam Bennett and Peter Sagan were also both relegated from sprints for dangerous actions at the Vuelta and Tour respectively.

#BreakingNews
London Fields has a GUNMAN on the loose on a bicycle.
LTNs in #Hackney have allowed criminals with GUNs to roam freely.
Arm Police despatched.
'Safer Street' Think not.
Remove these dangerous LTNs in #Hackney to to safe lives.
(Clip forwarded by a resident) pic.twitter.com/N5VCGFjPcY

Save Hackney Roads, an anti-LTN group, has been accused of grasping at straws for blaming road closures after a gunman was reported on the loose in London Fields, Hackney. The group posted the video above and claimed the gunman was on a bicycle so could escape the police easily: "LTNs in Hackney have allowed criminals with guns to roam freely. Remove these dangerous LTNs in Hackney to save lifes."

One Twitter user replied: "Grasping at straws there. I don't live near any LTNs yet someone got stabbed down the road from me by someone walking. Crime happens regardless of the street layout."

Another added: "Even the usual anti-LTN accounts are backing away from this one in embarrassment."

How exactly will removing LTNs restrict this individual's ability to roam freely?

That's the sound of the bottom of a barrel being scraped to splinters.