It's Thursday and a refreshed Dan Alexander is back on the live blog today after an extended bank holiday weekend... 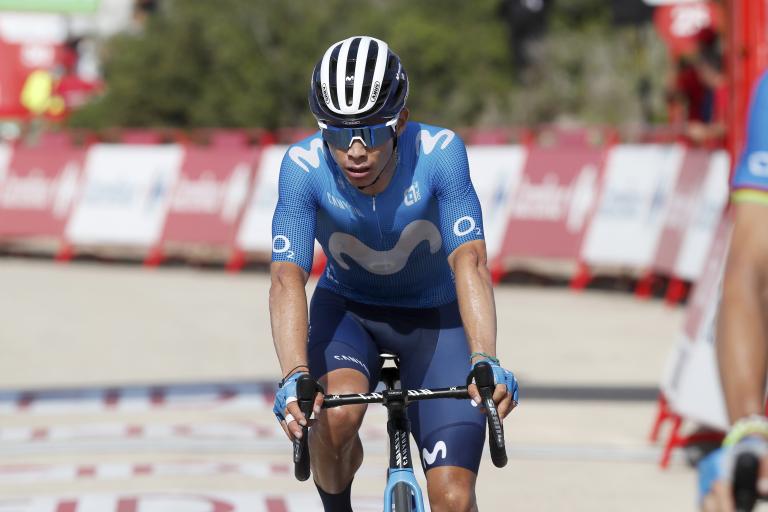 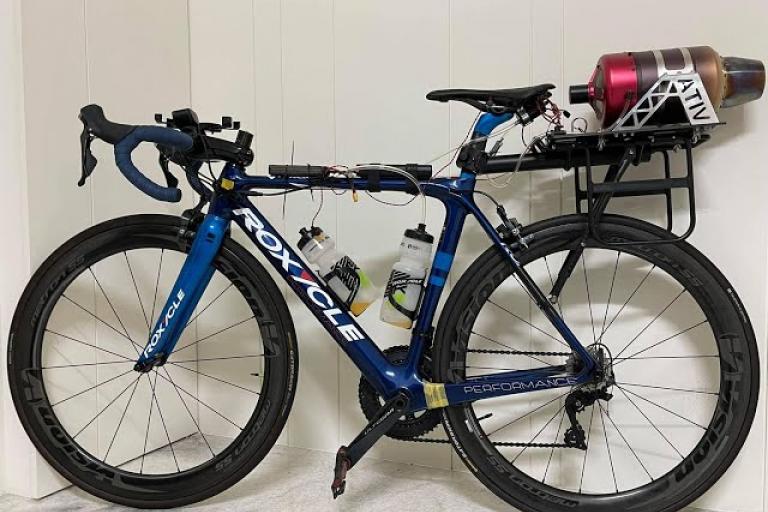 “I was shocked,” says Taiwanese rider, who says the bike went a bit faster than expected
14
02 September 2021, 14:12
Paralympic spirit: Australian rider Stuart Jones slows to support fellow competitor struggling at the back of the race

They're from different teams and competing in different races, but there's always support and respect between our Paralympians ❤️@UCI_paracycling #ParaCycling #Tokyo2020 #Paralympics pic.twitter.com/poWSq9Uv9V

Aussie Paralympic rider Stuart Jones put the disappointment of misssing out on a medal behind him to display some of the spirit the Games is all about. As he rode up the finishing straight he spotted South African rider Toni Mould, still a lap behind the field, and offered some encouragement.

"Keep going. You’re going great guns. You have only got a lap to go," is what 7 Sport reports was said.

"Look, I wasn’t going to podium," Jones told the Seven Network after the race. "That lady, Toni from South Africa, that is a true champion. That’s what the Paralympics are about."

Mould's cerebral palsy was brought about due to complications at birth, and she was forced to launch a fundraiser to support her campiagn to compete at the Games. Earlier in the year she said the sport had helped her "overcome depressive episodes and isolation, create new friendships, and given me a sense of community".

02 September 2021, 13:44
Transport for London and Hackney Council outline next steps for new cycleway between Lea Bridge and Clapton 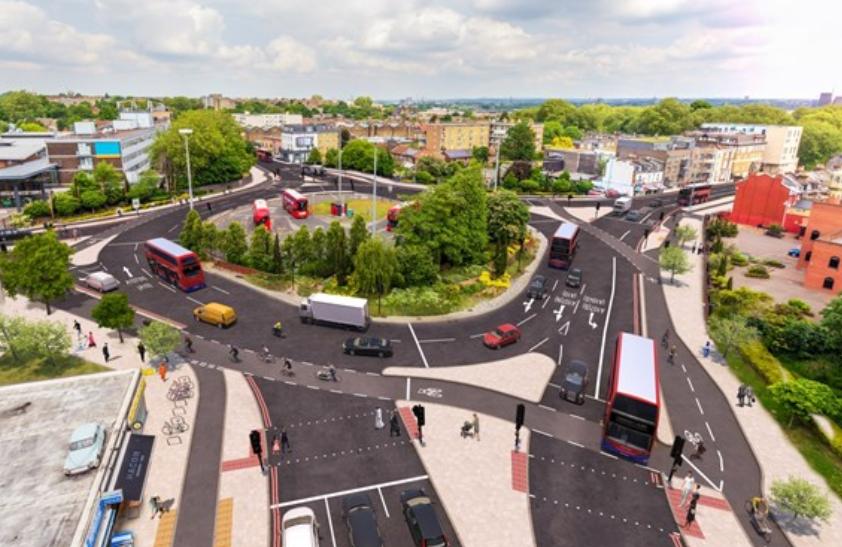 Transport for London and Hackney Council have outlined plans to instal a new section of cycle routes in the borough, including protected cycle lanes on Lea Bridge Roundabout and Lea Bridge Road. Work on the route is planned to begin in the autumn, with further construction to follow next year. 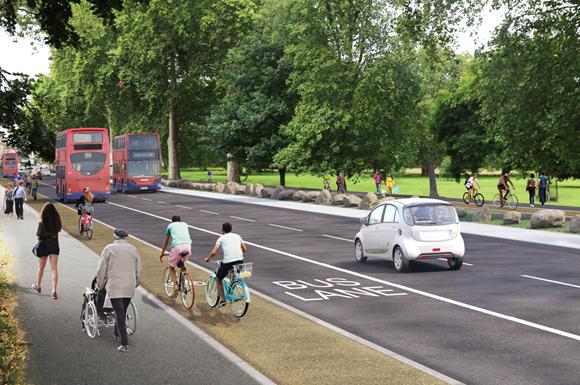 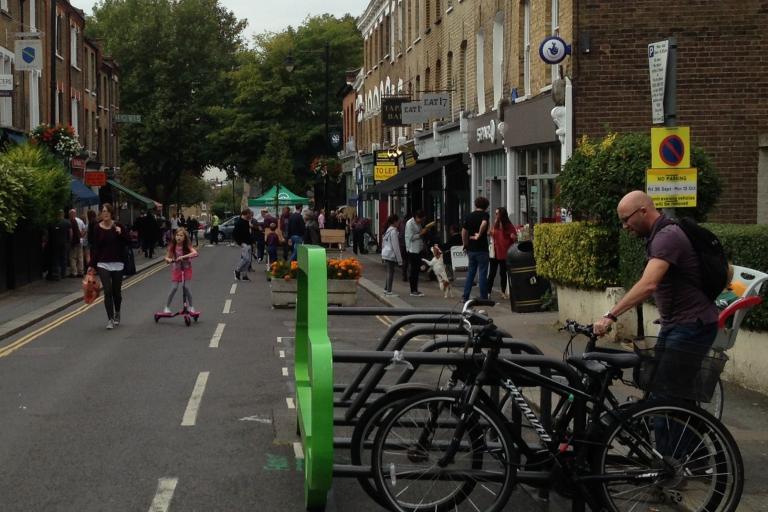 Stapleford chosen as town that could benefit most from DfT funding; elsewehere, Crawley Oxford and Shrewsbury also among candidates
0
02 September 2021, 12:50
"I am resigned to cycling defensively": Readers' comments and reaction to the video of a Cork cyclist taking a spin down one of the city's new cycle lanes...only to narrowly avoid being hit by two drivers

But they’ll blame the cyclists of course

Plenty of reaction to the morning blog story, including some discussion on what could be done to avoid situations like it...

Seagull2 commented: "I am resigned to just cycling defensively, because while i could be in the right, i could also be injured or worse."

AidanR wrote in: "This is a fundamental problem with cycle lanes and road junctions. Drivers don't give way to pedestrians crossing side roads, and don't expect to give way to cyclists in the same way.

"Obviously there's an element of driver education required, but getting angry at drivers and/or expecting them to act in a way which is counter-intuitive to them isn't going to make cyclists any safer. Is this a problem which could be solved with better design? I can't think what it might be, but I'm sure some bright spark has come up with something better."

Chrisonatrike made the case for a public information campaign: "Getting everyone 'educated' when we don't even require a 'refresher' of your driving test - unless you've been very naughty - will always be a hurdle. Maybe we should look to examples of public information campaigns on seat belt wearing and not having a few 'light ales' before driving?"

Over on Facebook, Blythe Storm questioned if we could even call it a cycle lane: "That's not a cycle lane, its some paint and a bit of coloured tarmac, as illustrated by the fact it doesn't work."

Ed Gibb added: "No way I'd ride that. Drivers not even looking the opposite direction to the road traffic flow. Most probably don't realise what the lane is." 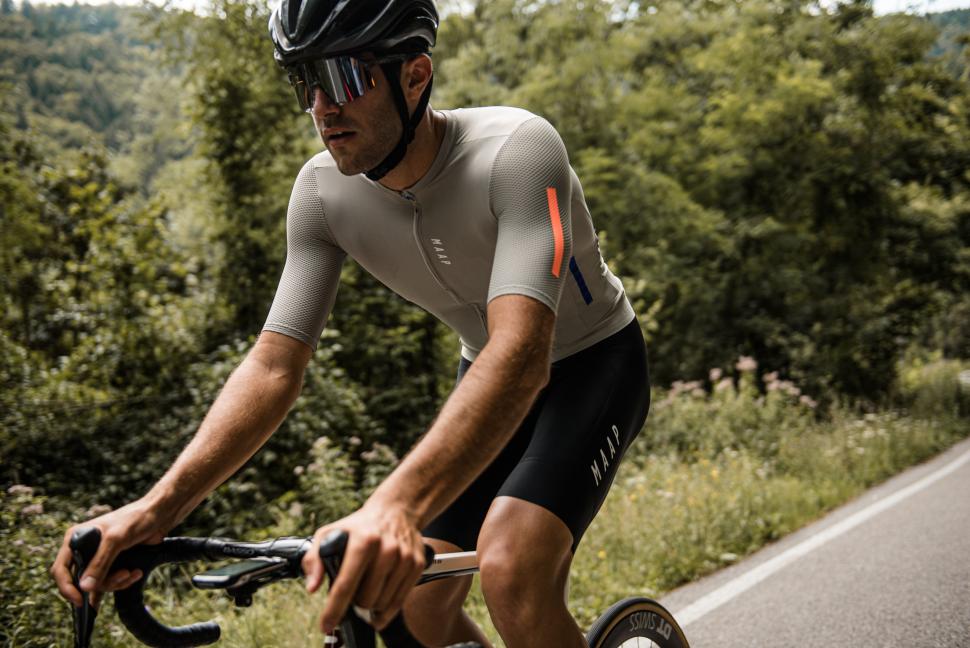 MAAP has launched an all-new jersey, building on the success of its top-selling Evade Pro Base Jersey. The Nova Pro features all the good stuff - the soft knitted Italian and pre-dyed fabrics, honeycomb mesh sleeves and SPF50+ sun protection - that customers enjoyed about the Evade Pro, and also has six strategically placed reflective graphics and "360 degree visibility in low light conditions."

"From day one, incorporating reflective detailing has always been a non-negotiable for us. It's as much a stylistic decision as it is a safety consideration, with visibility on the bike paramount to every rider. The Nova Pro Jersey takes the traditional MAAP design placement of the reflective graphic on the back left hand side, and enhances it five-fold with additional reflectivity on the front, back, and sleeves", said Misha Glisovic, MAAP Creative Director. 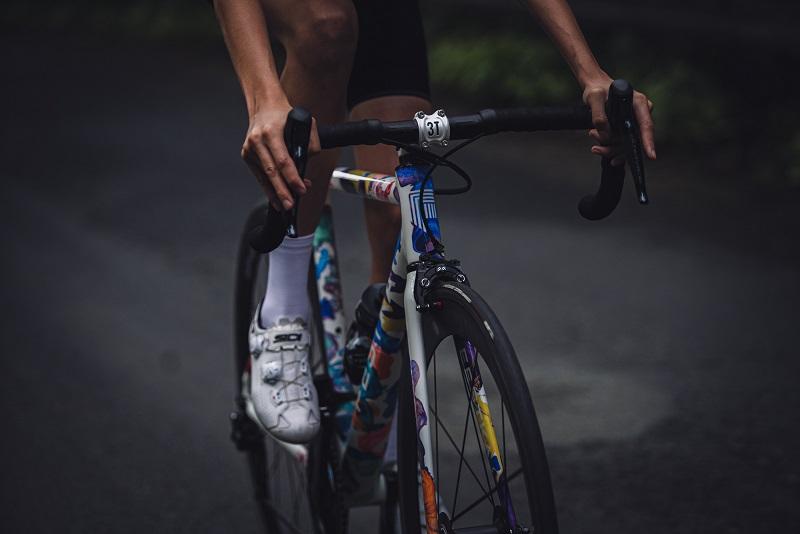 Festka is no stranger to eye-catching designs. The Scalatore Mummy on display in New York City was the most recent example on the site; its 10th anniversary limited edition design too...

Now, the Czech manufacturer of high-end carbon frames has teamed up with tattoo and shoe designer Ondřej Konupčík and artist Radim Kašpárek on a bling new design in time for the Karlovy Vary International Film Festival. Painted onto the brand's top-of-the-range Scalatore road bike and Scout gravel model, the latest project involved decorating the bicycle by transferring acrylic paints from the water surface onto the canvas.

It is a unique technique the pair have developed over the last six years and perfected during the first lockdown when Ondřej could devote himself full-time to tattooing. The end result is pretty impressive... 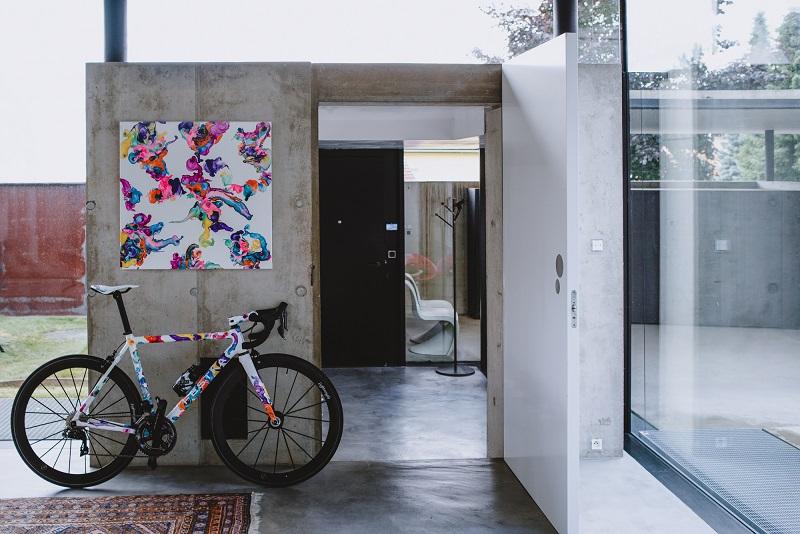 When a climb is compared to the fearsome Angliru, you know it is a serious piece of work. Today's Vuelta stage finishes up Altu d'El Gamoniteiru, the Asturian climb which has been dubbed the 'Angliru's evil sister'. Why? Well, it's 14.6km at 9.8 per cent and rugged at the top...

Here's how it compares to some of the other big names of the Grand Tour mountain stage fame...

1988 Tour de France winner Pedro 'Perico' Delgado went for a spin up the climb for his YouTube channel. It's in Spanish, but you don't need to speak the language to see just how savage those upper slopes look...a good day to be sat on the sofa, watching the race.

The Dame Sarah story rolls on...the legendary Paralympian won her 17th gold medal to take the outright British Paralympic record from swimmer Mike Kenny. Storey won her first two at the Barcelona Games of 1992 aged 14, skills that will have served her well on a soggy road race course in Tokyo this morning.

The 43-year-old beat fellow Brit Crystal Lane-Wright to the line and told the BBC, "It still feels like an out-of-body experience. It's very hard to put into words. I've worked for this for such a long time.

"It was fantastic weather wasn't it! I wasn't too fussed on the forecast. We probably trained for 32 degrees and 85% humidity. I was looking at my computer and it said 17 degrees and I had to wear a base layer! There were no cooling strategies needed - we were asking for heat packs.

"I don’t know if it’s sunk in! It’s something everyone has been talking about since Rio when it became a mathematical possibility with me doing three more events in Tokyo. I just feel immensely proud and also immensely grateful to have so much support and to have such a great team around me and also a great team back at home."

And, she might not be done yet. Storey's coach Gary Brickley, also speaking to the BBC, said his athlete isn't far off Michael Phelps' 23 golds..."so we have to keep pushing on."

This was the moment🥇@DameSarahStorey now stands alone as our greatest ever Paralympian.#ImpossibleToIgnore

Off to school again, up the 9% hill with a backpack 2/3 his size 😂 pic.twitter.com/FgFgndMYJK 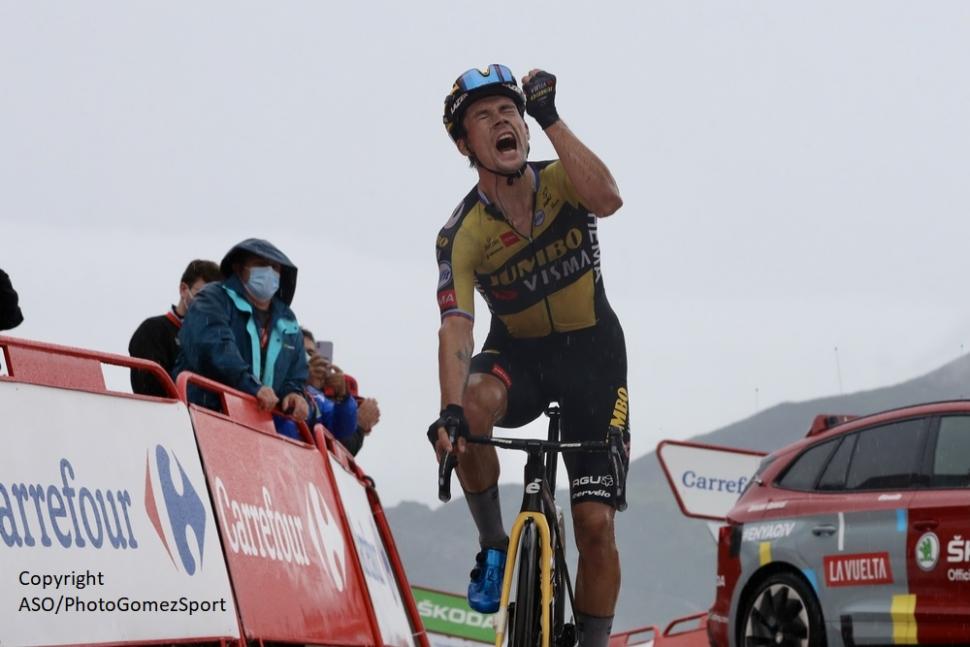 Look at how much yesterday's win meant to Primož Roglič. His teammate Sepp Kuss enjoyed it too...

The Slovenian's time was one minute slower than Thibaut Pinot's stage winning time from 2018 and Nairo Quintana's in 2016. Then again, none of the riders mentioned above attacked 60km from the finish and drove it through the valley at 45km/h for 40 minutes before the climb...

Has the vaccine been available in Belgium since 2018? https://t.co/SOOIlUS8sE

Ouch. Here's the full story linked if you missed it yesterday. The 2016 Olympic champ told a paper in Belgium he has been struggling against an "unknown enemy"...which, for the record, is the line I'll be using every time I get dropped from now on...don't worry I'm not blaming the vaccine too. I just think it sounds better than, "sorry guys, thanks for waiting for me again".

Way to mark your first spin down a new bike lane. Not one but two drivers butting across the lane almost took out this rider on his maiden voyage down Cork's new South Mall cycle path.

Some have made excuses for the van driver, saying they would not expect to see a cyclist travelling in the same direction on this side of the road...others said it is that attitude that is the problem. We certainly haven't seen any excuses being made for the Ford driver creeping out into the lane.

In the discussion sparked by the vid, one cyclist said: "I really dislike bidirectional cycle lanes because so many motorists when turning left don't bother looking left."