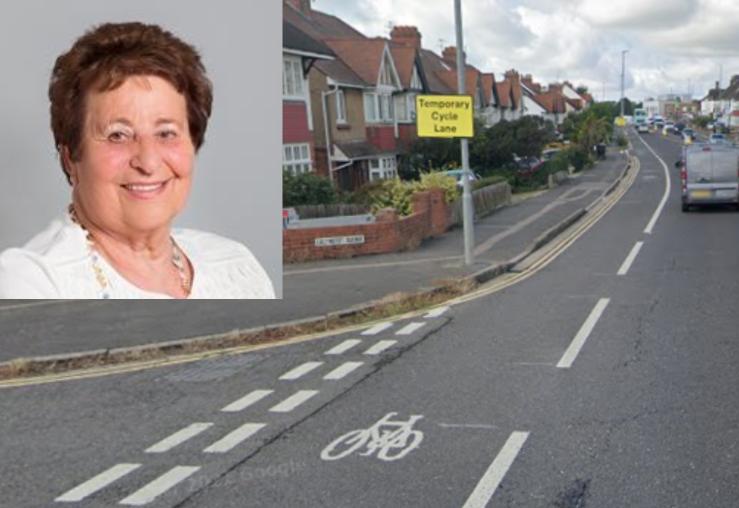 Brighton and Hove councillor Dawn Barnett, who last year threatened to paint over a bike lane used by children to ride to school, has called for lorries to be banned from residential areas
by Ryan Mallon

A Conservative councillor in Brighton and Hove – who last year threatened to cover up a bike lane used by schoolchildren with black paint unless it was immediately removed – has launched a petition calling for HGVs to be banned from residential areas as they put schoolchildren in danger.

In August 2021 councillor Dawn Barnett offered to personally speed up the removal process of a contentious bike lane on the Old Shoreham Road, which was set to be scrapped during the following month by Brighton and Hove City Council after just over a year in operation.

“I’m sorry it’s not being removed quicker than that after it went in overnight,” she said at the time. “I’ve offered to go along there with a tin of black paint to cover up the white lines.

“I understand Highways have got to remove the high signs and burn off the white lines, but I don’t want it dragging on. The council could go along there and get the posts out. It shows willing and lets people know it is happening.”

Barnett made headlines again a few months later, when she said that guerrilla activists – who had painted makeshift markings where the ripped-out cycle lane had been – should be prosecuted for their “ignorant” actions.

The councillor’s steadfast opposition to the Old Shoreham Road bike lane, which she insisted “wasn’t safe and wasn’t used”, stood in direct contrast to the feelings of local parents, who launched a petition for the bike lane to be reinstalled a month after its removal.

In response to the “shameful” decision to bin the temporary lane – which also saw the council docked government funding – the parents of children attending the Bilingual Primary School in Hove set up a ‘bike train’ to get their kids to school safely.

“Using that road is a lot more dangerous when you don’t have a cycle lane there. Cars whiz past at speed and in volume. It was not a nice journey in comparison,” said one parent.

While Tory councillor Barnett seemed happy to ignore the concerns of parents regarding the Old Shoreham Road, this week she has put the safety of schoolchildren at the forefront of a petition calling for HGVs and lorries to be banned from residential areas in the Hove suburb of Hangleton.

Barnett told the Argus that “extremely heavy vehicles are doing circuits” around Hangleton Valley Drive, St Helen’s Drive, Hangleton Way, and (the appropriately titled) Broad Rig Avenue as part of apparent lessons for HGV drivers, which she claims is “detracting from the amenity of the neighbourhood and causing vibrations under houses”.

She continued: “The residents would like to see the council take action to stop these juggernauts using residential roads and we are calling for the council to put in place road weight restrictions.”

The councillor also noted that she saw one of the lorry drivers mount the pavement on Hangleton Way and argued that the “juggernauts” could prove dangerous for children travelling to school as the new term gets underway.

“We’ve got four schools in the area and loads of nurseries, but I stood up there the other day and one of these great big juggernauts had hardly any room to get past the cars.

“This is a conservation area – residents shouldn’t have to put up with it.”

Barnett and another councillor have lodged a petition on the local Conservative Party website calling for a weight restriction on the roads in question, which will be presented to the council at the end of the month.