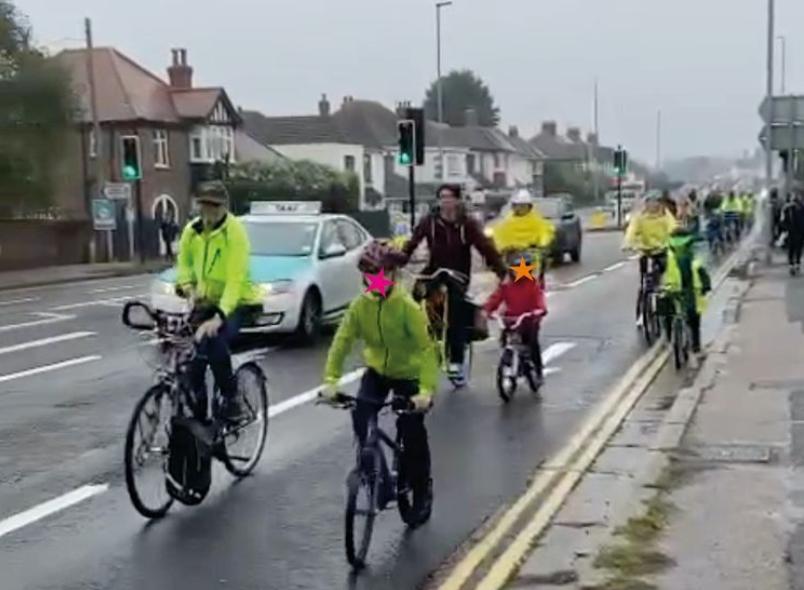 Parents in Hove, East Sussex, have set up a ‘bike train’ to get their kids to school safely after Brighton & Hove City Council removed a temporary protected cycle lane.

They are also petitioning for a bike lane to be installed on Old Shoreham Road, where the lane installed last year was removed, but are calling for better planning to make it less “contentious” with other road users.

The bike train runs each Friday morning at 8.35am from Boundary Road to the Bilingual Primary School in Hove for a 9.00am arrival, reports The Argus.

Ben Kelly, a parent of children at school who helped set up the bike train said: “It’s one hundred percent in response to the bike lane being taken out.

“We had only just started using that route whilst it was still a temporary route to get to school because we wanted to reduce our car journeys.

“Using that road is a lot more dangerous when you don’t have a cycle lane there. Cars whiz past at speed and in volume. It was not a nice journey in comparison.

“We thought we’d do a bike train to get safety in numbers, what we basically do is ride two abreast, take up the whole lane and cars can then drive around us.

“They take a more considered manoeuvre around us than if we were just single file,” he continued.

In terms of future infrastructure, he said the group is calling for “Just something better planned, I can see why it was contentious with motorists.

“I have a car myself, I’m a motorist and a cyclist,” he added. “I can see where it’s frustrating but the sheer number of cars is a problem.”

We the undersigned petition Brighton & Hove Council to install well-planned and high-quality permanent cycle lanes on the Old Shoreham Road so that we and thousands of other residents have the option of getting around by bike. We’re a group of parents and children who used the Old Shoreham Road to get to school, work and leisure activities. We want our children to be able to cycle to school as it’s good for their physical and mental health, it gives them independence, saves time and money and keeps down emissions. We’d also like delivery riders and commuters to get around without risking their lives. This can only happen if the roads are safe. New government policy says ‘cyclists must be physically separated from high volume motor traffic,’ which means protected lanes on roads like the Old Shoreham Road. We want a fast and direct route, as the policy describes.

Temporary cycle lanes allowed us and our children to travel safely for a while, but now they’ve been removed, we have to drive, take the bus or brave terrifying traffic by bike. Our children have less freedom and we have fewer transport options.

Forty percent of households in the city don’t have a car, and that number is even lower for young people. We all need safe, cheap, efficient transport.

We’d like our local politicians to take everyone’s well-being seriously, no matter how they get around. We need them to make cycling possible by making it safe.