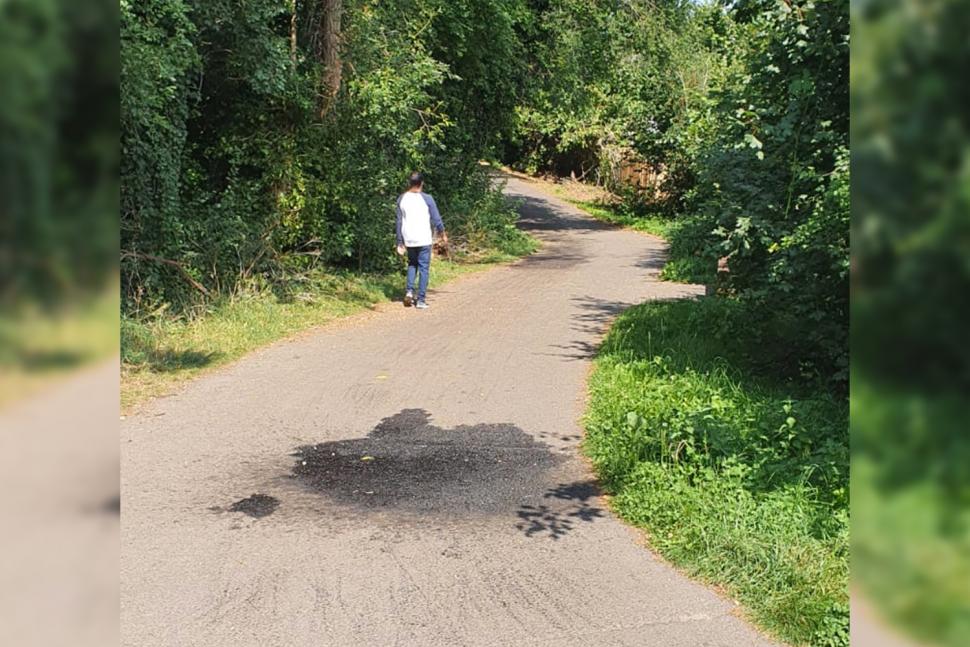 After child skids into wall on her scooter, are Bath Two Tunnels cyclists and other users of greenway being deliberately targeted with oil?

Patches of oil in both tunnels, as well as surrounding park land
by Simon_MacMichael

Cyclists and other users of Bath’s popular Two Tunnels Greenway off-road cycling and walking route appear to be getting targeted with pools of oil both inside the tunnels and in open parkland – causing one child to come off her scooter, while other people have found their skin and clothing stained with oil afterwards.

As we reported on our live blog yesterday, one cyclist who spotted the oil on the path in Oldfield Park, which forms part of the route that incorporates the eponymous Victorian railway tunnels speculated that it was most likely put there on purpose to target cyclists.

But in the post, made to a local Facebook group, the cyclist who took the picture above said:  “What they need to remember is that this path is used by everyone, including kids and the elderly. It’s now very slippery, potentially very dangerous, and will also be polluting the area once the rain comes.

And yesterday, in a post to the Walk Ride Bath Facebook group, a woman wrote of how oil inside one of the tunnels had caused her daughter to crash into the wall.

“When I took her straight home to wash she had oil all over her under her clothes,” she said. “Big oil slick at start of the short tunnel heading out of Bath. Right at the bottom of the hill when people have picked up speed.

“She went veering into the opposite wall and her scooter hit it.”

One person responding to that post suggested that the mother report the incident to the police, which she said she would do.

Another suggested that the substance the child skidded on in the tunnel might be soot – although that wouldn’t explain the patch of oil in Oldfield Park.

He wrote: “I’ve just been for a ride & it is slippery, especially for narrow scooter wheels but it looks & feels more like 70 year old soot (which is derived from hydro-carbons).

“The whole tunnel path is damp due to the condensation formed in this heat and residue has slightly pooled in the entrance. Best be cautious riding through.”

Yesterday evening, road.cc editor Tony Farrelly went along to see the issues for himself.

He said: “I guess the oil is targeted at cyclists – I don't see who else it could be, but the main victims so far would seem to be small children and dogs.

“The patch of oil mentioned on the up ramp at the Bath end of the shorter of the tunnels is easy to spot. There's quite a lot and it's mixed with the water that constantly leaks in to the tunnels so it's a big patch.

“The way it's mixed with water it's not that slippery and it's really black like heavy sump oil rather than diesel which, would be lethal.

“I didn't ride through the oil in the shorter tunnel but when I got to the end of the main tunnel going out of Bath my bike, my bag, and my legs were coated.

“There's clearly a lot of it in the main tunnel and it's very wet down there, plus they've reduced the lighting at the moment so it's impossible to spot, but it seems like it's all over the place. Definitely check your brakes after riding through.

“The main problem for most cyclists is going to be that it'll make a mess of their bike and maybe their bag. The people who it'll potentially cause the most harm to are kids and dogs.

“I stopped to take some pics of the bike when I got out of the main tunnel and got in to conversation with a family who'd just walked through with their small dog. They thought he was covered in mud, I told them it might be oil. It was. Can't think it'll do the dog much good. “

As to whether the substance might be soot, Tony said, after cleaning it off his bag that it was “definitely oil” and that it was “quite heavy.”

He said: “I've had some of that on my bike before, this is quite sooty which you'd think the stuff coming off the roof would be, but then so is sump oil. Even detergent hasn't got it completely off my and it's seeped in to the plastic.

“Also I've never seen anything like that in the shorter tunnel that's much drier, he added. You could see the oil there being walked and ridden out of the tunnel.