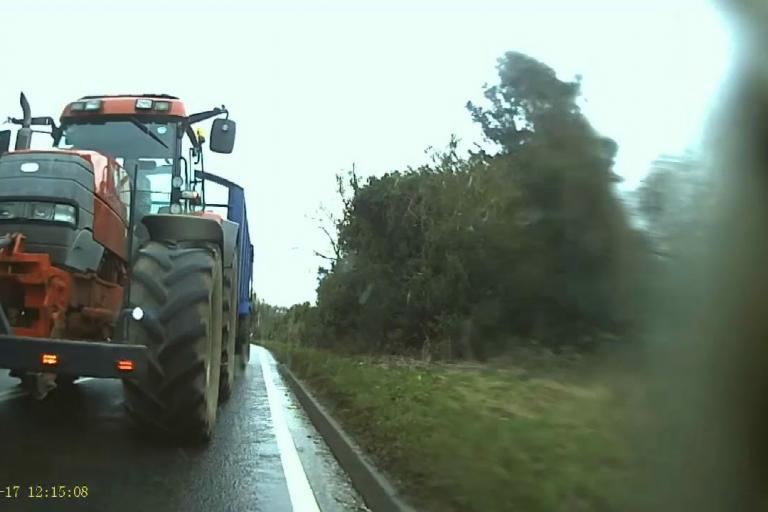 Rural A roads are where cyclists are most likely to be killed, road.cc analysis reveals

A BBC article published today under the headline, Cyclist deaths soar on rural roads in England, highlights an increase in the number of riders killed while riding in the countryside during 2020, and coincides with the launch of a campaign called Rural Road Safety by specialist country insurer NFU Mutual. Analysis of official data by road.cc, however, shows it is specifically rural A roads, rather than those one might think of as country lanes, where the main danger to cyclists lies.

The BBC article refers throughout to casualties in England – although in fact, the data, sourced from reported road casualty statistics published annually by the Department for Transport, cover Great Britain and thereby also include Scotland and Wales.

After four years when the number of cyclists killed on Britain’s roads was static at around the 100 mark each year, last year saw a big jump in the number of fatalities, which rose to 141.

While an increase in fatalities might be expected given the huge growth seen in cycling during lockdown, that also needs to be balanced against big drops in motor traffic in 2020.

First, here is the data for the number of cyclists killed each year between 2016 and 2020, broken down by whether the fatal crash happened on an urban road, on a rural A road, or on some other rural road. 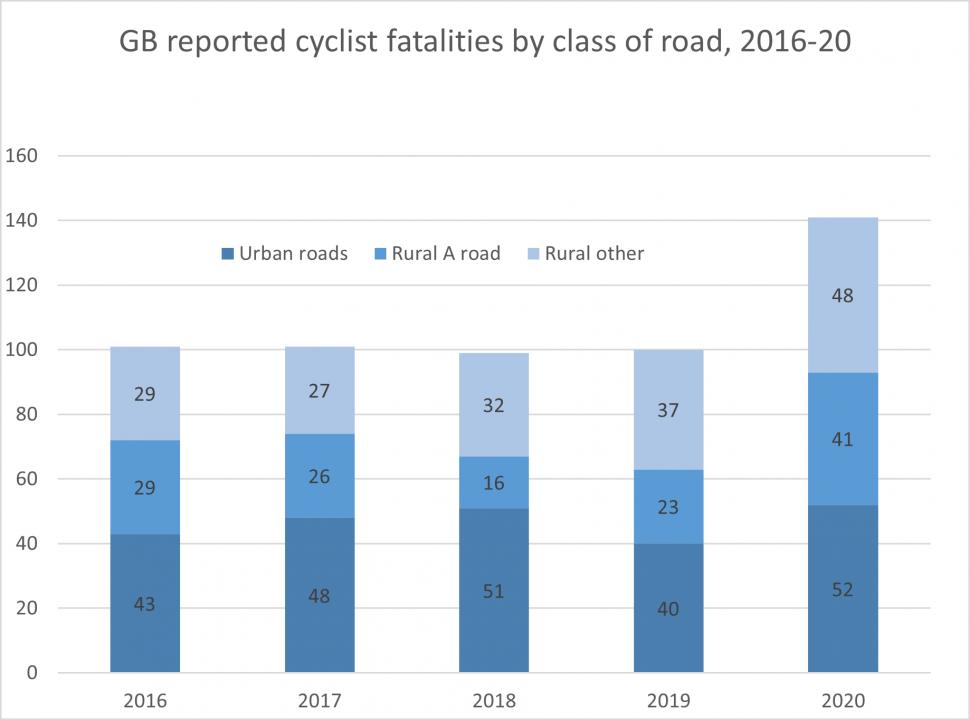 The spike in deaths in 2020 is clear from that chart, and what is also noticeable is that other than in 2018, when three more cyclists lost their lives on urban roads rather than rural ones, in other years it is on the latter where the majority happen – and, increasingly, on rural A roads, as highlighted in the following chart, which show the same data but expressed as percentages. The DfT also provides information on distance travelled, by type of vehicle.

All modes of motor transport had been trending upwards between 2016-19, before seeing a sharp drop in 2020 compared to the previous year – falling by 19 per cent on urban roads, 24 per cent on rural A roads, and 18 per cent on other rural roads.

Cycling was the only mode of transport to show growth as the pandemic took hold, helped by being a permitted form of outdoor exercise and with people encouraged to take to their bikes due to quieter roads.

But as this chart shows, it was on urban roads and other rural roads where that growth was concentrated – with a minimal increase in aggregate miles ridden on rural A roads, which accounted for 4 per cent of distance travelled in 2020 but, as we have seen above, 29 per cent of cyclist fatalities.

There is a caveat, of course, that of all modes of road transport, cycling is the one where it is most difficult to accurately assess the aggregate distance travelled by all users throughout the year. With that caveat in mind, comparing the annual aggregate distance ridden against which type of road cyclists were killed on does enable us to calculate fatality rates, and a stark picture emerges, as highlighted in the following chart.

While urban roads and other roads in rural areas have been trending fairly flat over the past five years, it is clear that per aggregate distance ridden on them, it is on rural A roads that cyclists face the biggest risk of being killed – specific factors behind this being likely to include the speed motorists are driving at, the type of vehicles, and lack of cycling infrastructure.

Launching its campaign on a dedicated microsite that has the heading Sharing the road. Respecting others – terms that are regularly used in such campaigns but which ignore that some road users are more vulnerable than others – NFU Mutual says:

Our aim is to make rural roads a safer place to be for anyone who lives in, works in, or visits the countryside - from motorists, motorcyclists and agricultural vehicle drivers to horse riders, pedestrians and cyclists.

That’s why we’ve teamed up with The British Horse Society, British Cycling and THINK! - the UK Government’s road safety campaign – to try to reduce the risks for all rural road users.

You are more likely to be involved in a fatal accident on a rural road than an urban road.

Over recent years, cycling has seen a surge in popularity, particularly during periods of local and national lockdowns, with quieter roads tempting many of us to dust of our bikes and take to the road.

The benefits of cycling are far reaching and include improved physical fitness and mental wellbeing. In addition, cycling is a clean, green mode of transport, and can also be enjoyed socially with friends and family.

Britain’s rural roads are an ancient and special network that are a joy to cycle. However, whilst cycling on rural roads can feel liberating, safe and relaxing, it’s important to remember that you’ll be sharing the road with local people and other visitors. Routes through the  countryside often include narrow, winding roads with no markings, high hedges, poorly maintained  road surfaces and soft verges. And with increased cycle traffic on rural roads comes increased pressure on cyclists and fellow road users to stay safe and respect one another.

Ride defensively but respectfully – on narrow, winding country lanes it’s important that you don’t ride in the gutter. Instead make sure you ride in a visible position away from the edge of the tarmac. If you’re aware of vehicles waiting behind you, pull in only when you consider it is safe to do so and if the speed limit will allow a safe overtake
Be considerate of the needs of other road users – when riding in small or large groups you can ride two abreast and it’s often safer to do so, particularly in larger groups or when accompanying children or less experienced riders. Be aware of drivers behind you, allowing them to overtake (e.g. by moving into single file) when you feel it is safe to let them pass
Be particularly careful around junctions – especially those where minor rural roads meet busier, higher speed A roads. Junctions are places of potential conflict and so caution is crucial when navigating them
Wear the right clothes – in the mixed light and weather conditions that are typically encountered during a daytime ride in the UK, there’s no one type  of clothing that will ensure you’re seen at all times. Fully reflective garments can be washed out in flat daytime light when there are no headlights to bounce off them. Even hi-vis, in certain light conditions, isn’t  a guarantee of being seen. The key is to be sensible and reactive to the conditions. To enhance your visibility, moving body parts, such as your feet and hands, are the most effective to make bright and seen
Light your way – if you know that your route includes long tunnels, sections with overhanging trees or if you just want to stand out a bit more, you might want to consider running lights during the day. Also, if you’re heading out in the late afternoon or evening and there’s a chance your ride might overrun, you should have lights with you and, if you’ve got them, why not have them on?
Consider the communities you are cycling through  – remember that the countryside is a working landscape and home to many. Be considerate of these residents and remember that you are a visitor to places  that  others  call  home.

Much of that is sound advice, of course, and we’re supportive of any initiative that aims to make the roads safer for people on bikes, but let’s not be under the impression that this campaign covers all rural roads – as that passing reference to taking special care at junctions “where minor rural roads meet busier, higher speed A roads,” it ignores those very roads where, as the statistics we have highlighted above clearly demonstrate, cyclists face the greatest risk of being killed.

A campaign aimed at motorists to make them drive more safely when sharing those rural A roads with people riding bikes would be most welcome – but will we see one any time soon?