Google Glass isn’t on sale yet, but one of the first apps available will be Strava + video
by David Arthur @davearthur

Wearable computing is one of the hottest areas of development in the tech world, and arguably the most state-of-the-art is Google’s Glass. It's an optical head-mounted display with voice activation, and can show all sorts of information in your field of view from a map of your location, the weather forecast to photographing or filming what you see. And now you can use it for Strava, as the training app is one of the first developed for Glass.

Strava of course needs no introduction. It’s responsible for making words like KOM and Segments common lexicon in the cycling world. Strava is just one of five apps currently supported.

“Strava for Glass makes it easy to track your rides, visualize your progress, and challenge your friends,” says Google, “all while keeping your hands on the handlebars.”

So you’ll be able to ride along and using Strava have information like ride time, distance and your location displayed right in front of your eyes. That means you don’t have to take your eye of the road to see how fast you’re going. Plus you can utilise the many other functions Google Glass offers, such as taking photos, recording videos and checking the weather, all without stopping to get your phone out. 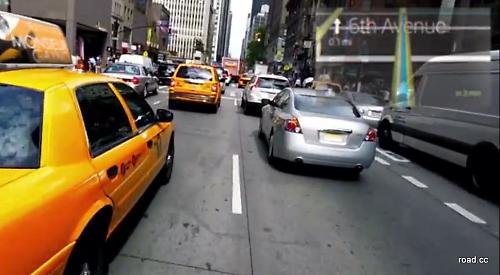 Whether this is sort of functionality is something cyclists wants is another thing, or even if there is a market at all for wearable computing, but Google are doing some pioneering stuff with Glass. The growth of wearable computing, with smart watches expected to be the next big growth area, does suggest there’ll be new and interesting ways to monitor your progress and speed when cycling in the future.

Don’t all rush to the shops just yet, Google Glass isn’t even on sale yet and there’s only a loose plan for it to be available sometime next year. Neither has a price been announced.

Perhaps you're wondering just what your vision looks like wearing them? Maybe you're concerned about them being a distraction? This video from Google gives an idea of what it might look like when wearing a pair.

The Guardian has s good video exploring some of the things possible with Glass.

The idea of using a heads-up display is one offered by the Recon Jet, a product specifically aimed at cyclists to provide ride data, connectivity to third party sensors and smartphones.