Will we get speed and other data in sight?
by Mat Brett

The Recon Jet is a brand new heads-up display (HUD) eyewear model aimed specifically at cyclists. It features GPS and on-board sensors to provide ride data, connectivity to third party sensors and smartphones, along with a high-definition camera with a microphone and speaker.

You might remember that we told you about Oakley’s Airwave snowsport goggles last year /content/news/69891-are-oakleys-airwave-goggles-sign-future and asked whether similar technology might be introduced into cycling at some time in the future. Well, Recon provide the technology for those goggles and it turns out that we hold mystical powers because cycling is exactly the direction in which way they’ve been working. The display sits towards the bottom edge of the glasses. Most of the time you look over the top of it but it’s easy to flick your eyes down to look at the information.

The Jet’s sensors offer you a range of performance data including your speed, pace, distance, time and the vertical ascent of your ride. Plus, through wireless connectivity to third party devices (via ANT+ and Bluetooth), you will be able to see your heart rate, cadence and power figures. 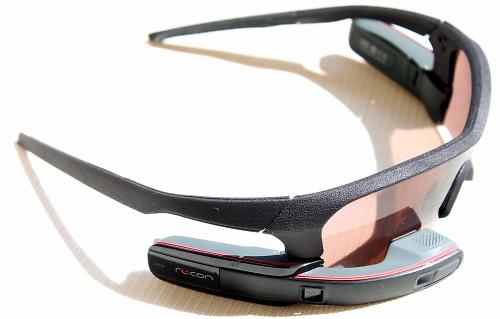 It will also allow you to connect to an iPhone or an Android phone for call display and web connectivity. It’ll display caller ID and text messages and you can even upload and view information from social networks. What Recon call an ‘optical touchpad’ allows you to navigate around – you just swipe your fingers across it like you do with many other computer devices. It works with or without gloves. Of course, whether or not it’s sensible to use all of these features while you’re actually riding along is another matter entirely, but it’s more the tech that we’re looking at here. We do think that looking at data that’s already in your field of vision has to be better than glancing down at a computer. The popularity of out-front mounts for Garmin devices supports this. 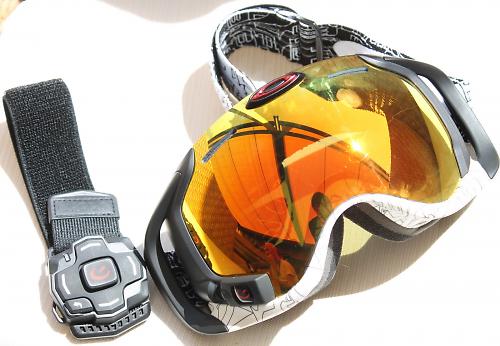 The HD camera is capable of taking still images and video. Recon don’t see it as a substitute for something like a GoPro, but reckon it’s good for grabbing quick shots and short-duration vid. The Jet runs on a dual core CPU and the whole thing weighs 60g. That’s considerably more than a standard pair of sunglasses but it’s really not that heavy. Recon report that people have been riding in these for several hours at a time without discomfort.

The Jet is currently available for pre-order at a price of $599, which is £386 on today’s exchange rate.

What about Google Glass?

The obvious rival to the Recon Jet is Google Glass, announced earlier this year. The Google Glass Explorer model that Google has been selling to developers costs $1,500 but that’s almost certain to drop dramatically when a consumer edition becomes available.

Google’s sheer marketing reach and general expertise at making search information easily accessible will mean that if there’s a market for wearable computing then Glass will find it. At first look, you’d think that would spell trouble for Recon, but we don’t think it’s that simple.

We all have a fairly smart mobile phone in our pockets after all, but that hasn’t stopped Garmin from selling squillions of Edge GPS devices even though every smart phone has GPS these days.

Generalist devices don’t necessarily rule the world. There’s still a place in the gadget world for doing one thing or set of things extremely well. If Recon nails a bunch of bike-specific features that Glass doesn’t offer, then in a couple of years time we could find ourselves swapping our Glasses for Jets at the start of a ride.

For all the info go to http://jet.reconinstruments.com/