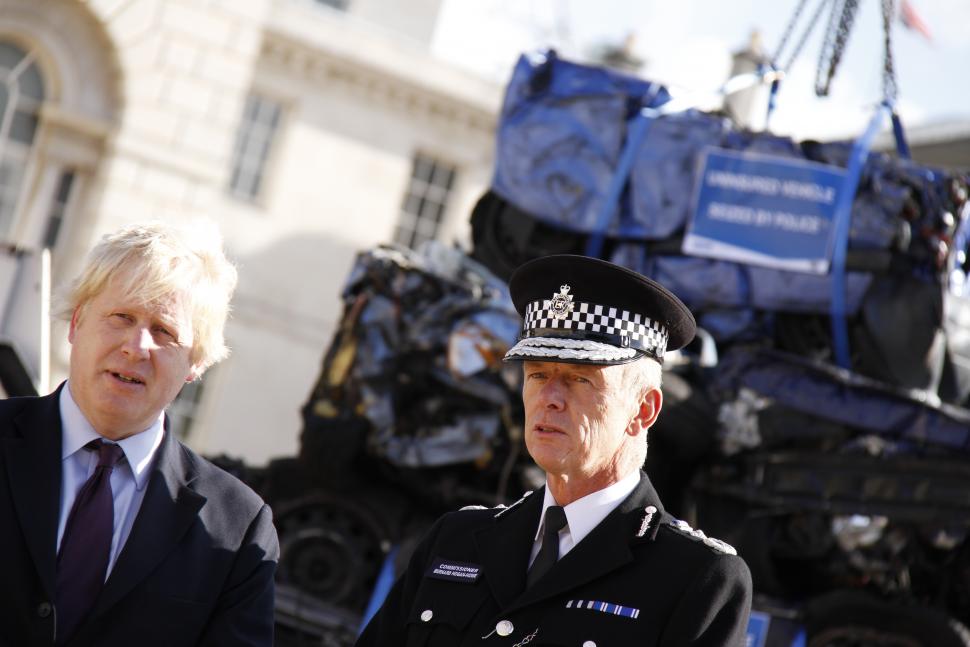 Met Police boss: Trucks in the capital are ‘killing machines’

Sir Bernard Hogan-Howe: 'One wobble' and you're dead...
by Sarah Barth

The Metropolitan Police’s Chief Commissioner has warned that trucks and large vehicles in the capital are ‘killing machines.

In an interview with LBC Radio’s Nick Ferrari, Sir Bernard Hogan-Howe said that "one wobble" could see riders end up under the wheels of a lorry or bus, in the wake of a week that saw five cyclists killed on London’s roads.

"It's a tragedy that we've had so many deaths in the last few days. I think overall it looks as though there are fewer cycle deaths per cycle journey, but that's no comfort to the poor families who've lost someone.

"We've all got to think about the way that we drive and the way that we cycle. It is difficult for the drivers. They're big vehicles, they can't always see out properly but they've got to take a little bit more care. When you've got such a big vehicle, then obviously they can be killing machines.

Sir Bernard encouraged riders to take part in an ‘Exchanging Places’ scheme, giving cyclists the chance to see the view HGV drivers have from the cab of a lorry, and better understand the risks involved in cycling around them.

We wrote about these schemes and the impact they can have on a cyclist’s habits earlier this year.

Sir Bernard said: "We've got the Met's Exchanging Places scheme and that's where cyclists and lorry drivers swap places and see the roads from each other's perspective and 95% of the cyclists who took part said they would never have understood just how difficult it is for lorry drivers. There's huge blind spots.

"But equally, the drivers have got to think that but for a wobble, they could be in front of a vehicle. I think for many people, we've all got to think carefully about how we drive and how we cycle.

Earlier this week we reported how the Mayor of London Boris Johnson also appeared on LBC Radio in connection with the cyclist deaths in the capital.

He said cyclists need to take responsibility for their own safety, and while he clearly stated he wasn’t trying to blame the victims in those specific incidents, an opposition politician has accused him of doing just that, describing his remarks as “an insult to the dead.”

Mr Johnson maintained that cyclists were obliged to follow the rules of the road and to comply with traffic signs.

He said: “Some of the cases that we've seen in the last few days really make your heart bleed because you can see that people have taken decisions that really did put their lives in danger.

"You cannot blame the victim in these circumstances. But what you can say is that when people make decisions on the road that are very risky – jumping red lights, moving across fast-moving traffic in a way that is completely unexpected and without looking to see what traffic is doing – it's very difficult for the traffic engineers to second-guess that."

A total of 13 bike users have been killed on London's roads so far this year.

A  ‘Save Our Cyclists’ petition calling on London mayor Boris Johnson to take urgent action, now has nearly 23,000 signatures after just 24 hours, and a ‘die-in’ protest and vigil has been organised for November 29 at Transport for London headquarters.
http://you.38degrees.org.uk/petitions/save-our-cyclists

The die-in protest will start at 5pm on Friday November 29 with a vigil for the cyclists who have died on London’s roads outside Transport for London HQ at 197 Blackfriars Road. That will be followed at 5.30 by the die-in and rally, before the event ends at 6.30.

“Transport for London needs our peaceful protest to be brought right to their door - the HQ of those who have failed to make our streets safe for our children or our pensioners to cycle on, never mind fit adults,” say event organisers.

Meanwhile, The Parliamentary Advisory Council for Transport Safety (PACTS) has written to the Mayor of London calling on him to convene an urgent Cycling Safety Summit in response to the recent spate of cyclist deaths on London’s roads.

PACTS Executive Director, David Davies, said: “The boom in cycling in London has many benefits and PACTS supports it but the tragic events of the past few days show that there is a need for urgent action.

"We are therefore calling on the Mayor to convene a cycling safety summit to see what can be done immediately to make cyclists safer. It is essential that actions are based on good evidence and well targeted outcomes. We must avoid knee-jerk reactions and measures that might be counter-productive.”

In addition, Gordon Seabright, Chief Executive of CTC, has written to Parliamentary Under Secretary of State for Transport Robert Goodwill MP calling on him to hold hauliers to account over cycling deaths.

He writes: “We know from the Freight Transport Association’s disparagement of even modest efforts on behalf of cycle safety by your Department that hauliers refuse to take this issue seriously.

"Until they do, CTC urges you to call in the leaders of the haulage industry so they can be held to account by yourself and representatives of pedestrians and cyclists whenever a vulnerable road user is killed by a lorry.

"As Minister you have an opportunity open to nobody else; by dramatising the problem and causing personal discomfort to those responsible you can focus their minds on making changes that are already available to them and already effective outside the UK.