There's lots to see at the Cycle Show and we had a good nose around on Friday getting an eyeful of the new bikes and kit. Themes of the show? Well, fixed is still here and it ain't going away by the looks of things. Pace, Globe, Demon Frameworks, Principia, Pearson, Viva, whoever... you name the brand, we'll show you the fixed.

As well as the hipster bikes there's a generous helping of classy-looking utility machines, often (but not always) singlespeeds as well. Electric bikes aren't here in the numbers that they were at Eurobike but you still get plenty of choice. On the road front we haven't seen much that's brand spanking new but we have been up close and personal with a few of the new bikes and kit, more on that later. Here's a few things we've seen. Proflex are back – anyone that paid any attention to mountain biking in the 1990s will remember the name, and essentially the name is all that remains - it's been sold on a couple of times and is now trying to re-establish itself as a brand. This incarnation of Proflex though is the first to feature a road line up, with Carbon and Aluminium framed offerings in the range. The bikes look smart if a little anonymous; we'll wait to see if they make a mark in the UK. We spent an unhealthy amount of time ogling and fondling the new Reynolds RZR wheelset. They really are unrealistically light, and up close they have a refreshing handmade look, a little rough around the edges but with great attention to detail. With a set weighing in at just under 900g you can expect unrivalled climbing performance; you'd expect it too, given that you won't get any change out of five grand... We're just over the other side of the kids' test track from Ana Nichoola so we popped in to say hi. They've been producing top quality hand made cycling gear from their base in North London for a year now, and they had a few new items on display including the excellent jacket pictured above. You'll pay a bit of a premium for the UK production (Jackets range from £120 to £160) but you're getting thoughfully designed gear that's built to last. Check them out at www.ananichoola.co.uk 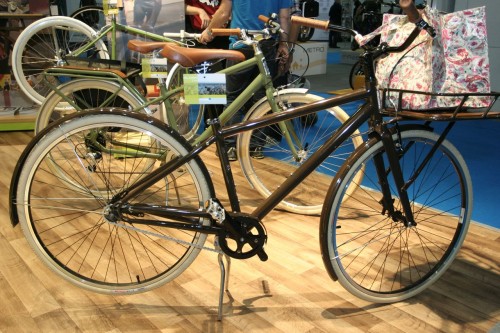 Specialized's sub brand Globe seem to be gradually redefining themselves as hipsters. The bikes used to be worthy but a bit ordinary, the new models have a great look and some nice design touches. Pictured above is the Live 1, a singlespeed town bike with a butcher's rack for your handbag and full guards for year-round cycling. They were also showing the Roll 2, a painfully cool fixed with some neat touches including through-axle wheels with Allen key fixings Liix have by far the most excellent stand at the show: a sushi bar with bowls chock full of funny valve caps, fancy grips and unusual lights. They were also showing Yakkay's hat-helmet (the safari hat was my favourite) and a wicker animal basket for your bike, complete with cage. 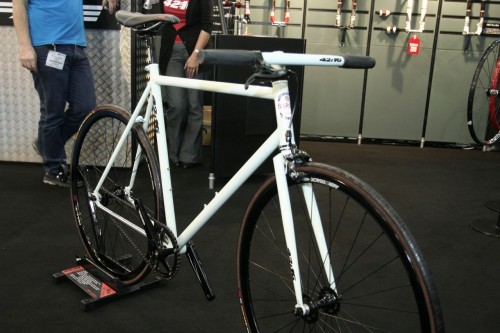 We haven't seen everything yet but road.cc's prettiest bike award is currently resting on the bars of the 42-16, a double-butted Cromoly fixed from North country suspension-meisters Pace. It's not cheap at £495 for the frame and fork, but Pace will throw in the colour matche bar and stem combo and they're all hand built and fillet brazed by one guy in Taiwain. There's a drop bar version too.