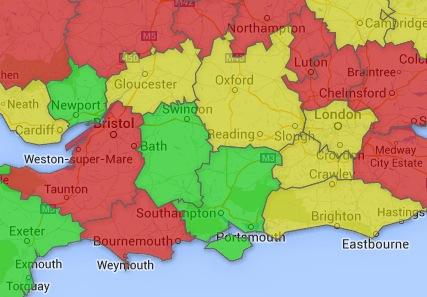 National cyclists’ organisation CTC has unveiled a map that highlights which police forces in England and Wales are working to improve the safety of cyclists on the road under its Road Justice initiative.

The campaign, which is sponsored by Slater & Gordon Lawyers, calls on police to implement a number of recommendations contained in a report, Road Justice – The Role of the Police, which was sent to police forces in July.

Those recommendations focus on three principal areas – the investigation of road collisions, the allocation of resources and training, and support for victims, and are as follows:

2.     The police should attend all road crash scenes involving injury and death and collect as much evidence as possible.

3.     The police should investigate reports of seriously bad or aggressive driving even when no injury occurs.

4.     The police should facilitate collision and ‘near miss’ public reporting systems and follow up reports made via these systems.

5.     Potential ancillary offences should be investigated, such as using a mobile phone whilst driving or having defective eyesight.

6.     Roads police need to be adequately resourced to respond appropriately to road collisions and to investigate them thoroughly; and to enforce traffic law.

7.     Roads policing should be prioritised for investment by national government and those who allocate resources locally.

8.   Training should be provided for roads police, investigation officers and family liaison officers about the practical and legal issues facing cyclists and other vulnerable road users.

9.   All road crash victims should be included in the Code of Practice for Victims of Crime so they receive support to the same standard as victims of other crimes with similar consequences.

10.   Police officers at any stage of a collision investigation should guard against a propensity to blame the victim.

The interactive map is colour-coded using a ‘traffic light’ system.

Red shows those forces that either haven’t replied, or which disagrees with all the recommendations, amber shows police forces that agree with at least one, and green highlights forces supporting “many” of them.

One in three forces back at least one of the recommendations, and by clicking on the relevant area of the map gives you facts and figures about the relevant areas as well as commentary from officers where relevant.

Rhia Weston, the campaign co-ordinator for Road Justice, has been in contact with senior officers and collision investigators at a number of police forces, and said: “For the most part, the police have been keen and willing to discuss the report, in order to explain the constraints they are under, mostly as a result of resource cuts, and to discuss the changes they’d like to see made to roads policing.”

In some cases, police forces have asked CTC to work alongside them on issues such as improving their capacity to promote safe cycling and driving.

Areas identified by some forces as hampering them when it comes to roads policing include lack of funding and national targets to reduce road crime.

There is broad consensus however among the forces that have responded that officers should be careful not to engage in victim-blaming, with instances of such behaviour among the case studies flagged up in the report and on the campaign’s website.

The Road Justice campaign is supported by a petition calling on the government to increase the safety of cyclists by improving roads policing. More than 10,000 people have signed it to date – if you haven’t, you can do so here.

Last year, representatives of CTC and Brtish Cycling met with then Minister or Justice  Helen Grant to call for a review of investigation, prosecution and sentencing of road traffic cases where a cyclist is the victim.

As part of the government's response to the Get Britain Cycling report published in April, Prime Minister David Cameron confrimed that such a review will be conducted in the New Year.