A look at the Boost, Ivor and Etika RC road bikes from two Italian brands
by David Arthur @davearthur

We’ve just been having a look at the latest Olympia and Scapin 2014 road bikes, brought down to the office by the UK distributor Poshbikes. It’s no secret we like Italian road bikes here at road.cc, and we’ve been fortunate enough to review the outgoing Scapin Eys and Olympia EGO RS this year.

We’re talking about these two brands in the same article for two reasons: Olympia owns Scapin, and they’re both handled by the same UK distributor, so it makes sense to deal with them in one go. Olympia this year celebrates its 120th anniversary, having started building frames in 1893 in Milan. In 2005, now owned by the Fontana family, Olympia took Scapin under its wings. 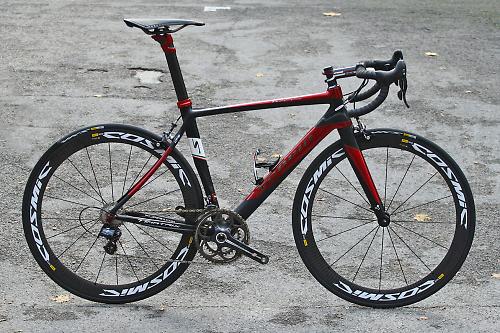 The Ivor is Scapin’s full custom option, their equivalent of going to Savile Row for a bespoke suit. The construction of the frame, a tube-to-tube process, allows Scapin to offer a full custom option so you can specify the geometry and sizing. It’s also available in a range of stock sizes if you don’t want to go down the custom route. The frame is made from T800 carbon and has a claimed weight of 1,090g, but of course this will vary according to how custom you go with the frame. The bike, reflected in the geometry and frame features, is aimed more at comfort and endurance riding than outright speed and racing.

Intended to deliver some comfort, the CFS (comfort flex system) seatstays are very thin in diameter and curved in towards the frame in an effort to allow them to absorb some of the vibrations and impacts from riding over rough roads. The frame gets modern touches like a tapered head tube, press-fit bottom bracket and carbon dropouts. There’s internal routing for mechanical or electronic groupsets. 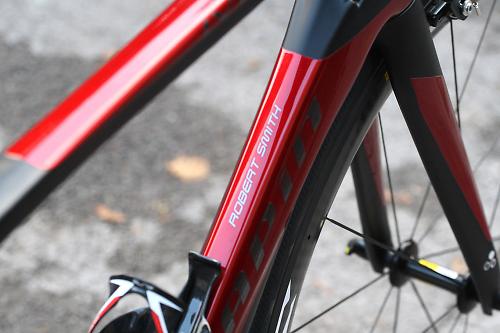 This actual frame already has an owner, the lucky Robert Smith, the custom paint finish including his name on the down tube. There’ll be no mistaking this bike for someone else's when leant up outside the cafe. 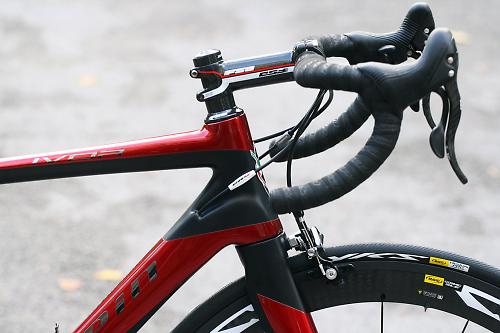 The S-Way mount atop the integrated seatmast, used on several Scapin models, is featured on the Ivor this year. The seatpost is secured into the frame with a TwinStop dual clamp system to prevent post slippage. A neat aspect of the split clamp design (half is attached to the post) is that you can remove the post, say for transporting in a bike bag, and then easily put the post back into the frame at the correct position. 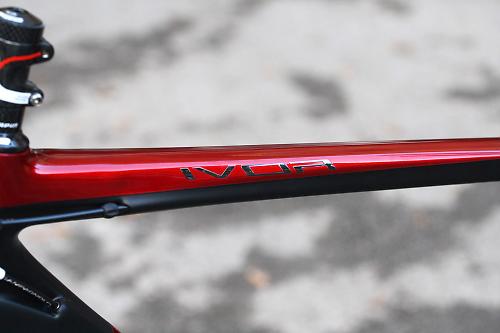 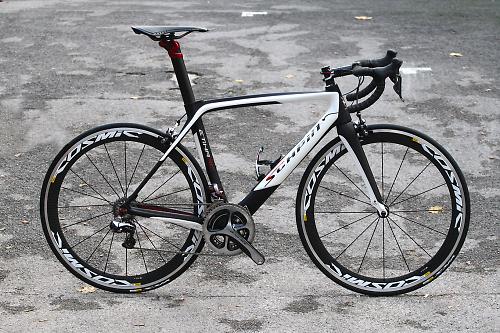 Scapin has dropped the regular Etika and is now just offering the Etika RC, which it first introduced just this year. The RC uses a more advanced carbon fibre layup to shave the weight over the regular Etika, and also offered improved aerodynamics with an aerodynamic integrated seatpost. 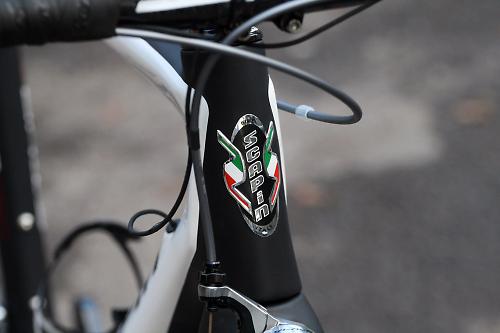 Scapin claim a 950g weight for the frame, made from T700 unidirectional carbon fibre. It has all the latest design details, such as a tapered head tube with 1.5in lower bearing, and a full carbon fibre fork. There’s a press-fit BB86 bottom bracket, full internal routing for mechanical or electronic groupsets, and the dropouts are made from carbon fibre to shave the weight. 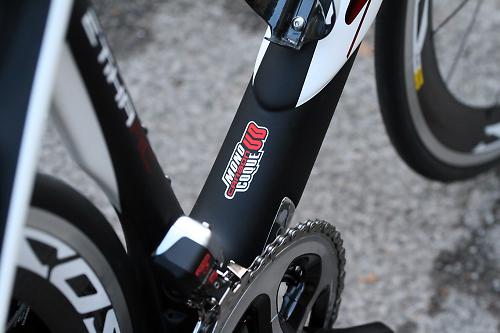 There are some neat details. A metal plate on the down tube and chainstay protects the carbon in case of a dropped chain. The seatclamp is an internal expanding wedge design which keeps the frame looking clean in this area. 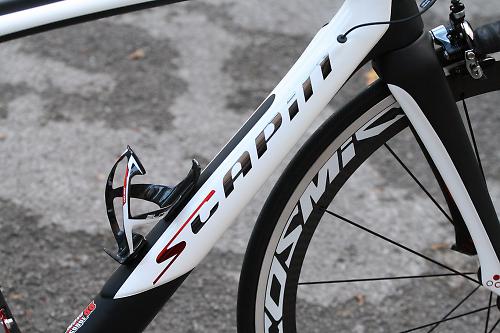 Something Scapin is proud of is the attention to detail it lavishes on finishing the frames. The company spends many hours on each frame in the paintshop, and that does show in the finish: get up close to the frame and the finish is superb. A load of colour options are offered, including the trendy fluoro yellow option further down the page. 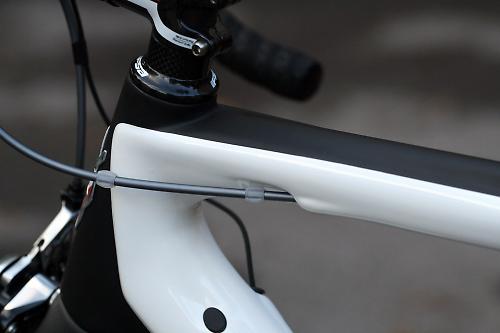 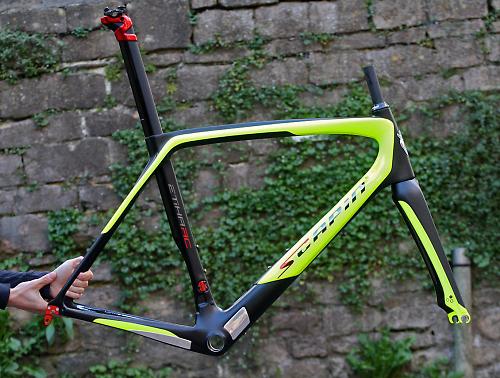 This is the fluoro yellow colour option offered on the Etika RC frame. Team with yellow oversocks and gloves for the full fluoro effect! 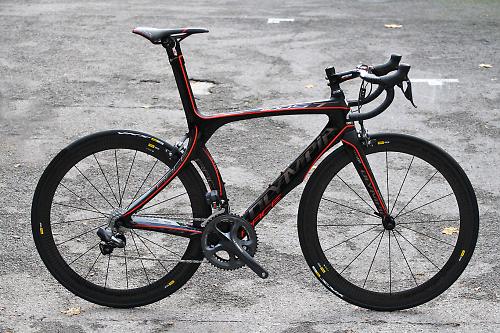 And now Olympia. We’ve tested Olympia’s EGO RS this year, and been impressed with it. We’ve also covered the new 849, the 120th anniversary frameset, and the Leader, its first disc-specific offering. We haven’t talked much about the Boost before, a stunning aero road bike that sits in its Carbon Race range. 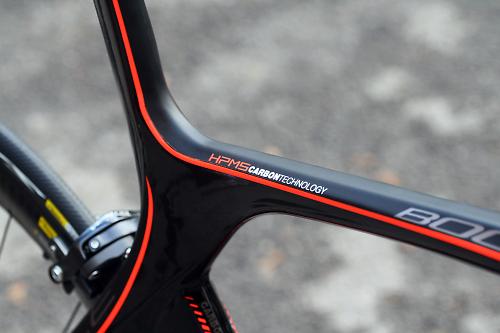 Olympia says in its literature that the Boost is “dedicated to the seriously demanding competitor looking for a responsive, lightweight and aerodynamic bike.” To that end, the frame is constructed from a blend of Toray 23. T30, T36 and T42 carbon fibre using what they call a ‘High Pressure Modular System’. 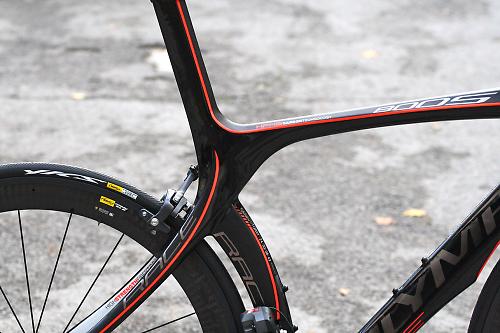 Naturally, the cables are routed internally for clean lines, there’s a tapered head tube with a monocoque unidirectional carbon fork, and a press-fit bottom bracket. The frame is fully compatible with electronic groupsets, they’ve even designed a hatch in the belly of the down tube to conceal the battery. 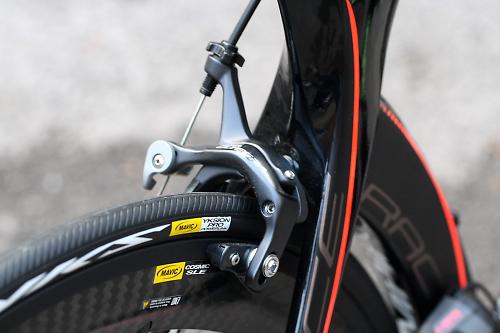 It’s a dramatic looking frame and cuts quite a stance in the car park. A teardrop shaped down tube has a cutaway following the curve of the front wheel and the top tube flows smoothly into curved seatstays. An integrated seatmast is topped with Olympia’s own seat clamp. It looks a lot like a time trial frame built up with road bike components. 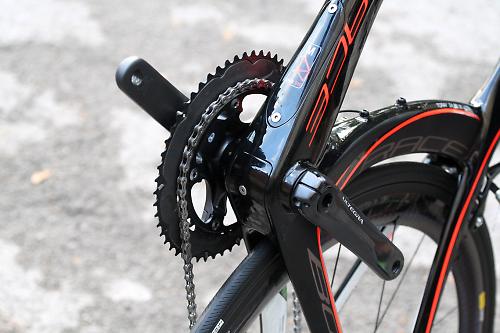 Want more Olympia? Did you see the special 4.26kg 859 build we featured the other week?

Olympia and Scapin are availabe in the UK through Poshbikes in Kent, you can contact them via info@olympiacicli.co.uk or their website http://poshbikes.com.