Italian manufacturer Olympia have launched their first disc-equipped road bike, the Leader, which combines an aero frame with a new disc specific fork and rear stays.

The Leader has been designed from the outset specifically with disc brakes in mind. Many consider discs on road bikes to be The Next Big Thing, some think they’re sacrilegious. One thing is clear, disc-equipped road bikes are here to stay (probably!), if the huge number of them we saw at Eurobike is anything to go by. Italian bike companies are clearly excited by the technology, with Colnago already onto their second disc road bike and Pinarello not far behind.

Olympia approached the new Leader with disc brakes at the top of the list. They’ve designed the profile of the tubes and even the carbon fibre layup to accommodate the disc brakes and the location of the forces they place on a frame. To this end, they’ve oversized the chainstays, which are asymmetric, to handle the forces placed on the stays by the disc brakes. Up front, the fork, which is free of the need to have a caliper brake mount, has a lower crown height, placing the headset bearing lower - this, they reckon, boosts the stiffness at the front. The head tube is tapered with 1 1/8in - 1 1/2in bearings. As with the 849 we saw a while ago, the frame is fully compatible with electronic and mechanical groupsets, with all cables and wires routed internally. Even the hydraulic brake hoses are internally routed for very clean lines. Disc mounts are post mount, and they’ve used threaded alloy barrels, replaceable in case of a damaged thread.

As you can clearly see from looking at the photos, the Leader has also been designed with aerodynamics in mind. The main tubes use an airfoil profile with an aero seatpost held in place with a concealed clamp. The seat tube wraps around the rear wheel, and the seatstays meet the seat tube much lower than a regular frame, a trend we’re seeing with a lot of aero bikes. It’s all about reducing drag, and placing the stays low like this appears to be a popular way of contributing to the overall aerodynamic efficiency. 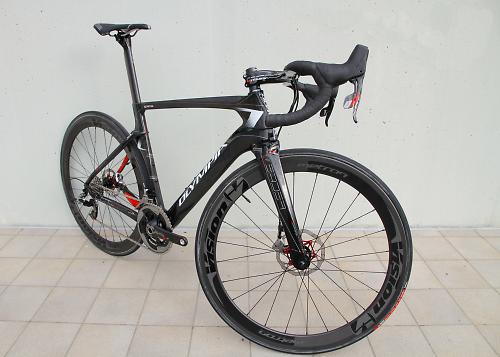 One debate surrounding the development of disc road bikes - it’s still very early days, remember - is the choice of axles. The Leader opts for regular quick release axles, which are the most popular choice on the disc-equipped road bikes we’ve seen. Some, such as the Storck and a few others, instead borrow bolt-thru axle technology from the mountain bike world, an approach that some in the industry feel is the right step for this new breed of road bike. Countering this, Olympia says the design and layup of the new fork and rear triangle negate the need for bolt-thru axles. It’ll be interesting to see this aspect of bike development pans out in the coming years.

No word on availability, or indeed pricing, yet. When we know, we’ll let you know. The bike pictured is fitted with a SRAM Red 22 groupset with their new hydraulic disc brakes, with what appears to be a 160/140mm front/rear rotor combination. The wheels are Vision’s new Metron 40 Disk (that’s how they spell it) with an FSA handlebars and Olympia’s own aero seatpost with monolink seatclamp.