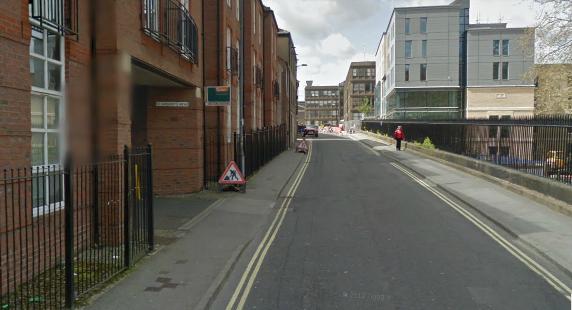 A new contraflow cycle lane could prove a ‘deathtrap’ for riders, a businessman in York has said.

Robin Stannard, who owns LV Services, a cleaning contractor in Tanner Row, says that the new cycle lane has not only forced out his disabled parking spot, but also means that when delivery lorries make their twice daily stops, passing drivers are forced into the cycle lane for up to 45 minutes at a stretch.

The newly painted lane, which cost £5,000 to establish, runs in the opposite direction to the traffic flow, something that Mr Stannard says is “entirely dangerous”.

He told York Press of the delivery drivers: “It’s not their fault, they have to get on with their business, but it parks on the street twice a week for 45 minutes and blocks the road.”

He says the only alternative to taking up the cycle lane is to wait behind the lorry, something he said would cause “severe congestion”.
He also said that the new lane came at the cost of a disabled parking space he used to use.

He said: “I can only speak for myself, but I’m pretty sure it will be affecting other businesses as well. I’m unable to park anywhere.”

Richard Wood, assistant director of City and Environmental Services at City of York Council, said: “York is one of the top cycling cities in the UK and has an extensive network of cycle routes across the city.

"The contra-flow lane scheme on Tanner Row is an important addition to this network, and similar cycle lanes are commonly used across Europe and are fully compliant with the Department of Transport guidelines.

“In addition to Tanner Row, there are also existing contraflows at the Station Rise end of Leeman Road and in Salisbury Terrace and there have been no reported issues at either site in the last three years.”

According to a council assessment of the proposed cycle path:

If a cyclist had the option to travel north eastbound on the section of Tanner Row that is currently one-way, they would have much easier journey options and travel on roads with less traffic. Cyclists have already been observed contravening the one-way order on Tanner Row, suggesting a contra-flow facility would be well used.

The report also notes that until recently, it was illegal for drivers to enter contraflow bike lanes. As this was no longer the case in ‘advisory cycle lanes’, it made it possible to construct the lane without obstructing the flow of traffic.

The report also records the concerns of local police about the cycle lane. It says:

North Yorkshire Police believes there is a risk to cyclists as some drivers may not understand the new style contra-flow cycle lane as they enter Tanner Row. They also state that the footways are very narrow and there is a danger of pedestrians stepping into the carriageway and not expecting a cyclist to be travelling along the one way street.

According to the report, the cycle lane was eventually adopted because, on balance, it was considered necessary to encourage riders to come into the town, as they were likely to appreciate the safe return journey.