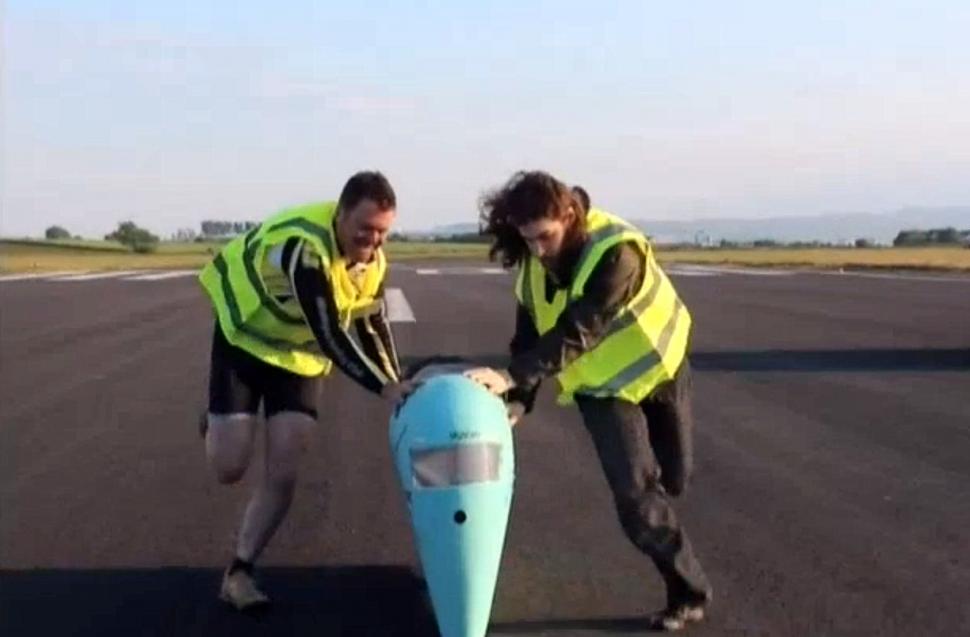 48-year-old Scot posts 56.62mph in Beastie to take the record
by dave atkinson

Flying Scotsman Graeme Obree is the new World speed record holder for cycling in the prone position. The 48-year-old has been competing at the World Human Powered Speed Challenge at Battle Mountain in Nevada, and posted 56.62mph through the 200m speed trap to take the record.

We've been following Obree's attempt on the record for well over a year. The smooth lines of the faired bike don't really do justice to the home-workshop engineering that's gone into Beastie; for the record here's a picture of what's going on under the hood, from the original road test: 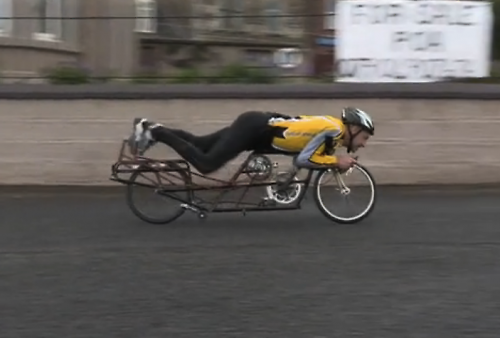 Obree's chin rests less than an inch from the front tyre, and the shoulder supports are made from a repurposed saucepan. One of Obree's major innovations was to use push levers instead of a circular pedalling motion. The bike ran a maximum gear of 290 inches for the record attempts.

Battle Mountain is a favourite location for human-powered speed attempts. The road allows riders an acceleration zone of up to 4 miles before being timed over a 200 meter seciton. The road was also resurfaced in 2009, with a smooth surface specially prepared for human powered vehicles.

Originally the plan was to go for the overall human powered speed record of 82.819mph, set by Canadian Sam Whittingham at Battle Mountain in 2009. However the exposed course highlighted some design flaws in Obree's design, and after crashing the bike, and admitting that the new prone record was "close to the maximum" for the machine, he was forced to give up on that mark, plus the British record of 67.4mph, currently held by Ron English and set on the same course in 2002. In the end the human powered record did fall, but not to Obree: Sebastiaan Bowier recorded a speed of 83.13mph in Vortex 3 to set the new mark. [thanks to user ped for pointing that out]

Obree was scheduled to have another attempt at that record in Vortex, the back-up bike of the University of Toronto team who are also at Battle Mountain. However, he has abandonded that attempt now after several test runs of the unfamiliar machine.

Speaking to The Daily Record, Obree said of his record breaking weekend, "I don’t feel a sense of failure. I came away with a world record and it has been a privilege to be taken into the heart of this community of cyclists.

“I had this idea my bike would be competitive way beyond the level of previous prones and I could put a good punt on and reach great speeds. It turned out not to be the case, but you never know until you try.”