It’s easy to get distracted by the tons of carbon fibre at Eurobike, but one of the bikes I was looking forward to riding at the demo day was the updated Canyon Roadlite AL 7.0. With an aluminium frame and new carbon fork and seatpost, it looks like a fantastic bike for the £1,119 asking price. How does it ride then? Well it has a swift turn of speed, rapid acceleration and engaging handling that is easy to get to grips with very quickly. I only had a short time on the bike around the buttery smooth roads and rolling hills of southern Germany, not enough time for a full assessment, but enough to realise this is an impressive package. Not only for the money, because you do get a full Shimano Ultegra 11-speed groupset and Mavic Aksium wheels, but on performance alone.

Canyon have enjoyed a fairly meteoric rise in popularity in the UK in the last couple of years. Their direct sales approach - you buy online and the bike is delivered to your house, cutting out the bike shop and distributor - means Canyon can offer extremely well specced bikes for the price. Using an aluminium frame allows more room for a decent parts package, and it’s impressive to get Ultegra - Shimano’s second-tier groupset remember - at this price. 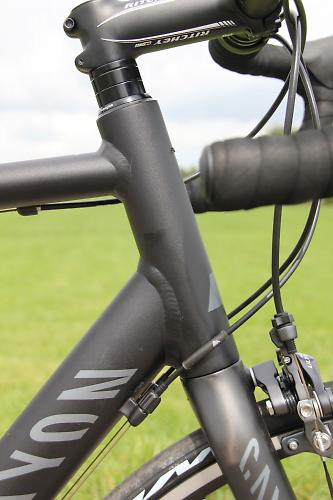 Yet there’s clearly no shortcuts. The frame is beautifully finished with smooth welds, the decals smart and understated. A nice flourish of contrast colour on the inside surfaces of the fork blades and chainstays, colour matched to the Askium wheels. It's all very smart looking and you really do a double-take at the price tag. It's almost too cheap.

Evidence Canyon have their finger on the pulse is the fitting of 25mm Mavic tyres, the on-trend width for tyres this year. It’s good to see the size filtering down to bikes at this price, where riders will value the extra comfort even more. It’s also a good way of just softening some of the stiffness that can be an acquired taste with alloy frames. Changes over the 2013 frame are minor, the most significant is the lengthening of the chainstays by 5mm. This stretches out the wheelbase to increase handling stability, which will be more noticeable at higher speeds. In such a short first ride it’s difficult to asses the impact this change has had. Throwing it through a few sweeping bends on the roads around the Eurobike demo day centre certainly revealed a bike that feels planted at speed and turns corners smartly. They’ve given the 2014 model a new One One Eight SL full carbon fork, with a non-tapered 1 1/8in carbon steerer tube. It weighs 350g. Canyon have also added a VCLS carbon seatpost to the package too. Both will contribute to the ride by working with the 25mm tyres to dilute the frame's stiffness, without somthering the feedback altogether. The fork adds a crispness to the handling, with nice direct feedback and a good level of communication, without being overly stiff - like the frame. 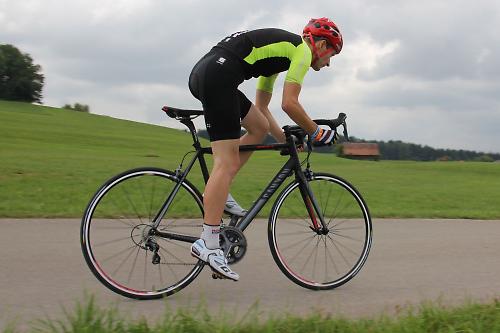 Smart changes to the new Roadlite then, which not only further increase the value it already offered, but make for a better riding bike. The bike still has that crisp aluminium feel, but it’s far from harsh or uncomfortable. Forget that idea that aluminium is uncomfortable, it's just not true. It’s a well engineered frame with a well thought through parts package that makes it a fun bike to ride. Whatever your ambitions, the Roadlite is a serious shortlist contender for anyone with up to £1,200 to spend on a road bike. The ride also offered a first opportunity to spend some time on the new Shimano Ultegra 11-speed groupset. As we’ve come to expect from Shimano, the shifting is absolutely crisp, precise and quiet. Shimano have slightly modified the shape of the hoods, and the lever stroke is shorter and lighter than previously, so it’s a doddle to flick the chain across the 11- sprockets. The slimmer hood shape is a noticeable improvement, I always found the previous shape too bulky for my small hands. Did I notice that extra sprocket? Not on these roads, not enough climbing to really work across the full cassette range at power. We didn’t have our scales to hand (they’re on Mat’s packing list for next year) but Canyon claim a all-up weight of 7.95kg (17.52lb). More details at www.canyon.com