Cervélo will commemorate the 100th edition of the Tour de France with a limited edition S5 Team. This is the same frame that the team will ride in the Tour, starting in a couple of weeks.

The frame is finished in the colour scheme of Team Garmin-Sharp-Barracuda, with a argyle design applied to the inside of the forks and used for the logo on the the down tube. There’s a small outline of France filled in with yet more argyle on the top tube, with the number 100 printed in the middle. There’s also a ‘100’ sticker near the seat tube.

Campagnolo have finally followed Shimano in developing an internal battery for their electronic EPS groupset, and we spotted it at the Bianchi launch this week. We haven’t seen the actual battery itself, but it’s a long cylinder (much like the internal Shimano Di2 battery) and it fits into the bottom of the seat tube above the bottom bracket. Other brands might even, we hear, fit it in a chainstay. A cable routes around the bottom bracket and provides a charge port.

We’re hoping Campagnolo have made sure the charge port is sufficiently waterproof to survive the British weather. It’s up to 80g lighter than the regular external battery too. Expect to see quite a few 2014 bikes upgrading to this internal battery.

Proviz hi-vis gilets for the summer

Proviz have just sent us news of their new range of gilets. Available in men and women’s sizes and in three colours - bright yellow, pink and orange - each is designed to boost visibility with large reflective panels.

The gilet is made from a lightweight material claimed to be highly breathable and it’s also water resistant, so good for a light shower. There’s a tall neck, dropped tail and full-length zipper. You can add Proviz’s clever LED flasher to a Velcro patch under the collar to further increase visibility. They cost £29.99 each.

See the range at www.proviz.co.uk

Dorset-based Prendas continue to produce stunning retro cycling kit, the latest being this 1989 ADR jersey, bib shorts and socks made specially for them by Santini. The Belgian ADR team won the Tour de France in 1989 courtesy of Greg LeMond, his second Tour title following his first in 1986. He is still the only American to have won the race.

The 1989 edition of the Tour has gone down in history as the closest ever. The gap to second placed Laurent Fignon was just 8 seconds. LeMond had entered the final state time trial trailing Fignon by 50 seconds, but thanks to his use of a rear disc wheel and clip-on aero bars, he slashed the deficit, winning by 58 seconds, overhauling Fignon to win the race.

Check them all out at www.prendas.co.uk.

Fulride is a Spanish cycle clothing brand you might not have heard of, but they have more than 20 years of experience. They sell direct through their website and they have just launched a summer collection with the 84.10 SL short and jersey with a combined weight below 200g.

The 84.10 SL jersey weighs just 84g and is made from their own FR SSL fabric, which has been designed to be as light as possible, it’s just 82g per square metre. Details include bonded seams, a three-quarter length lightweight zipper, several reflective details and banana-shaped pockets that are intended to be easier to use than regular vertically straight pockets. It costs  €99,90.

The shorts - they’re of the non-bib variety to keep the weight down - are made from an FR SL fabric with flat-lock seams and a bonded finish. The pad is an EIT Performance Cross Man chamois with various depths and density of foam, and a Super Air lamination technique provides good breathability. They also cost €99,90.

A good pick for changeable spring weather is the GEM 24.10 light jacket. A combination of FR Light Membrane and FR Coolmax+ fabrics give the jacket good breathability and capability to deal with a 10 to 18ºC temperature range. It has a Rapha/Mavic-esque off-set full-length zip, the same ergo ‘banana’ pockets as the jersey, and plenty of reflective details.

Take a look at the full range at www.fulride.com

Culprit’s kids’ bikes are now available in the UK for the first time. We’ve told you about the bikes a couple of times in the past, most recently when we reported from Taipei Cycle earlier in the year.

The Junior models are designed as proper road bikes for children. The Junior 1, for example, comes with a 35cm triple-butted 7005 aluminium frame with internally routed cables, and a Shimano 105 gearset paired up to 10-speed short reach levers from Microshift. Those gears are low ratio, complying with British Cycling’s age-specific gear restrictions.

The bike has 20in wheels and Culprit reckon it’s suitable for children aged 5-8 years. They give the weight of the complete bike as 7.9kg (17.4lb) and it’s priced at £1,085. Yes, that’s expensive for a kids’ bike, but this is designed to ride like a miniature adults’ bike.

The Junior 2 is a similar bike but it comes in a 45cm size with a carbon fork (rather than alloy) and 26in wheels. It’s aimed at children ages 8-13.

Urban bike brand Vanmoof is in the final stages of developing what it calls, “The world’s first intelligent commuter bike.” It features GPS tracking, smart power control and a lightweight, integrated battery.

The Vanmoof 10 Electrified features an onboard computer that monitors your cycling behaviour via a sensor, adjusting the bike’s electric power – supplied via the small, lightweight motor in the bike’s front wheel – accordingly.

The bike also comes with a GPS tracking system to help you retrieve it in the event of loss or theft.

The frame is made from anodized aluminium and you get mechanical disc brakes front and rear.

The battery offers a range of 30-60km (19-38 miles) depending on the surface, weather conditions, rider weight and the level of motor assistance you select.

We’ve no word on price or a date for availability yet, but we’ll let you know those details when they’re sorted. In the meantime, get more info from Vanmoof’s website. 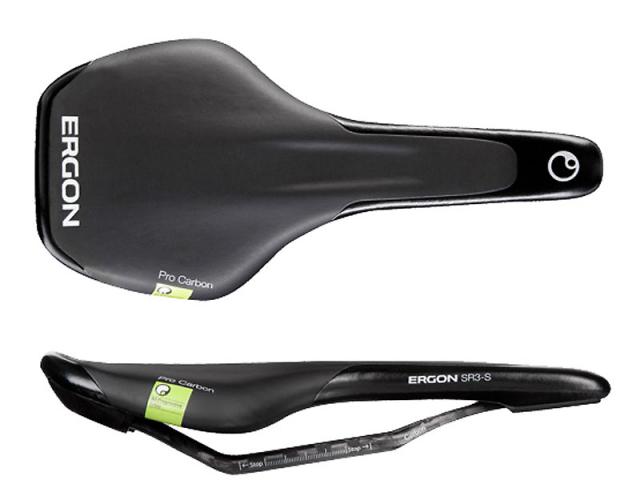 Ergon have introduced a new online Saddle Selector that helps you choose the right saddle for you from their range, You go to their website, tap in a few details about yourself from a dropdown menu, and it tells you the saddle that’s most suitable for you. Someone needs to develop something similar that covers a whole bunch of different brands.