Bianchi have updated their top-end road race bike and they're offering a disc brake version of this new XR2. There are several other important updates to Bianchi's road range for 2014 too...

We've already seen some new kit from Bianchi this year. Back in April we hot-footed it over to France to have a look at their new Infinito CV endurance bike. That model, with its CounterVail damping technology, was showing off some very interesting tech, but the talk at today's Bianchi 2014 model launch was mostly about everyone's favourite hot potato: helm… Ahem! Road discs.

Back when we were trying out the Infinito CV it was mooted that a disc version of that was in the offing, but that's not what we've seen today as it isn't quite ready. We're currently looking at a new Oltre, the XR2. The Oltre has been around for a bit and in its XR guise landed a 4.5-star review; the Oltre XR2 is the next step in its development.

What are the changes? Bianchi say that the Oltre XR2 is stiffer and comes with a lighter bottom bracket.

"Design and performance meet thanks to the Design Technical oriented approach," say Bianchi. "[It's] a super light frame for optimal performances in the climbs and [an] aero shape to make the bike faster on the flat and downhill segments". So there you go. The new Oltre XR2 frame is made from UMS40 and CN60 ultra high modulus carbon fibres and the weight is a claimed 895g (that's for the 55cm version). That's not quite as light as some (such as the Canyon CF SLX and the new BMC Team Machine SLR1, both of which come in under 800g), but it's none too shabby either.

It has a BB386 bottom bracket, tapered head tube (1 1/8in to 1 1/2in) and is designed to be compatible with both mechanical and electronic systems. The UTSS (ultra thin seatstays) are designed to give a bit of the ever-sought vertical compliance. The frame comes with a specific seatpost that's aerodynamically optimised - pretty much everything in the bike world is 'aerodynamically optimised' these days - and made from unidirectional carbon fibre for a bit more give. There are four post lengths, from 250mm to 380mm, depending on which of the seven sizes of frame you want. The offset is either 25mm or 30mm, depending on the post length. The new fork has a "down tube integrated design" for better aerodynamics (the fork crown is hidden within the silhouette of the head tube/ down tube) with a target weight of 355g. 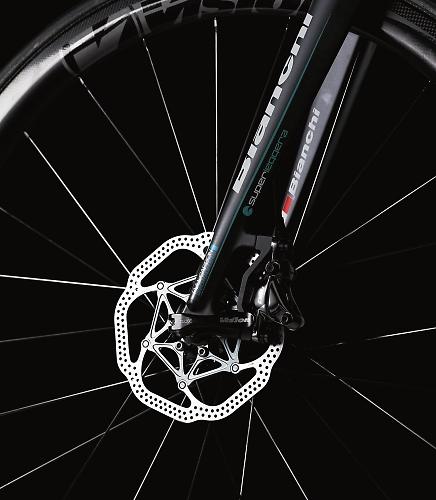 There are six specs available for the XR2 if you go for rim brakes, none of them budget options. You can have SRAM Red, Shimano Dura Ace or Campagnolo Super Record if you're into mechanical shifting, or Ultegra Di2, Dura Ace Di2 or Super Record EPS if it's electronic shifting you're after. The Oltre XR2 has an internal battery for Campagnolo EPS electronic shifting. DeRosa have already produced a bike with the EPS battery hidden inside the frame, but this is totally new design - Campagnolo's answer to Shimano's internal battery option. It's a long cylindrical design that fits into the bottom of the seat tube just above the bottom bracket. A cable comes around the bottom bracket - inside the BB shell - and you get a port in the frame where you can recharge. You can remove the battery from the frame if you really need to, but it's designed to stay in there. Oh, and It's 60-80g lighter than an external battery.

Neat, huh? It certainly makes a whole lot of sense; there's plenty of empty space inside a bike frame doing very little. You might as well make it earn its keep. If you want the disc version of the bike then it's SRAM Red only for the time being; that's the only groupset here that has a hydraulic disc option... although it's fair to say that that's not likely to be the case for very long. Bianchi haven't said that they're going to do a XR Disc with brakes from anyone but SRAM but, on the other hand, they haven't said they won't either. You can draw your own conclusions. The XR2 Disc frame has a different carbon layup in the chainstay which is beefed up to take account of the braking forces and the same is true of the disc-specific fork. Since the Infinito CV Disc is confirmed as a 135mm rear spacing, we'll assume that the XR2 disc is too. Both bikes use 160/140mm post mount disc brakes. Interestingly, the XR2 Disc comes with 25mm tyres to give you a larger contact patch between bike and road. One concern that many people have voiced regarding disc brakes on road bikes is that the more powerful braking will result in skinny tyres skidding. Using slightly larger tyres is one way that Bianchi are seeking to combat this. Also updated is the Sempre Pro. A PressFit 30 bottom bracket and tapered head tube have allowed the Bianchi engineers to use bigger sections in the frame for "optimal rigidity", and it gets the UTSS seatstay technology for added compliance at the rear. The Intenso is the next new bike. The monocoque carbon frame gets a tapered head tube (1 1/8in to 1 1/2in) and it's mated with a full-carbon fork with vibration-damping Kevlar inserts. 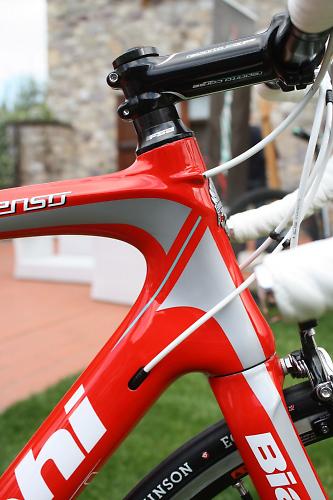 The cables are routed internally while the bottom bracket is a screw-in BSA type rather than an oversized option. Bianchi have a target frame weight of 1,230g in a 55cm model size, and you can have it built with Shimano 105, Shimano Ultegra, or Campagnolo Veloce. The Intenso is intended as the little brother in the range to the infinito - so it's a bike about riding big miles in comfort so it has similar C2C geometry.

Lastly, the Via Nirone 7 has been updated with a hydroformed, triple butted 7000-series alloy frame that Bianchi say is more rigid than the previous incarnation. The carbon/alloy fork also features Kevlar in the build and options go right down to Shimano's new 8-speed Claris groupset.

The final bit of news we have from Bianchi is that although their time trial bikes are unchanged for 2014, they're currently working on a new TT design for 2015. This will probably be released towards the end of next year with team riders competing on it ahead of that.

"It's a huge project," says Bianchi's Product Manager Angeo Lecchi. Bianchi seem really excited about it, but they're saying nowt other than that it's on the way.

We'll be taking to the roads of Brescia tomorrow on the new Oltre XR2 - and hopefully another new model or two - so stay tuned for a first ride report soon.

Unfortunately, we don't have full news on UK availabiility or pricing on any of these models as yet. We can tell you that the Oltre XR2 with the internal Campag EPS battery will be shipping very soon while the Oltre XR2 Disc will follow within the next month. Bianchi will be announcing prices later this week. When we know, so will you.