Everyone's riding 'em these days. What with the state of the road surfaces in Blighty and the weather, having a bit more rubber underneath you and disc brakes to haul you to a stop is fast becoming a necessity more than an option... anyway, there's a whole raft of 'cyclocross-inspired' commu-tourers out there. And this one the Arkose III from Pinnacle looks like a super spec for cycle-to-work money.

Pinnacle's Arkose range starts with Sora and Mini-Vs on the £750 Arkose One, and the Two gets Avid BB5 discs and Tiagra running gear for £900. An extra hundred quid gets you better disc brakes (BB7s) and Shimano's 105 shifters and rear mech, and you're still under the cycle-to-work limit. Well, on it. 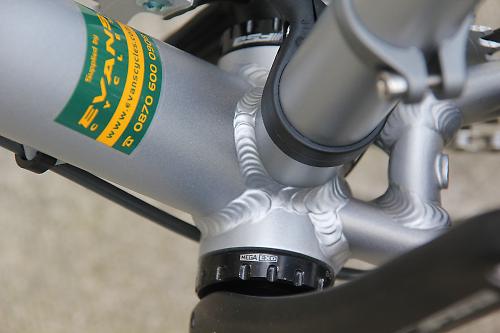 Heart of the bike is 6061-T6 heat-treated alloy frame in a tough-looking silver finish. The welds are chunky, as are the tube profiles, so it should be a stiff platform. 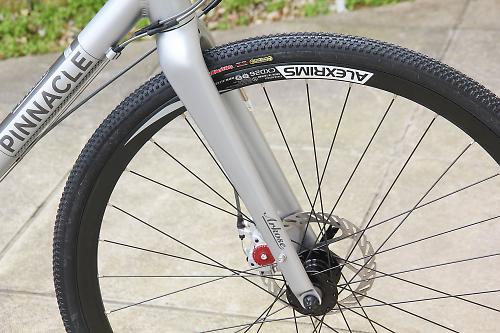 That's mated with a carbon fork, a chunky affair with a carbon steerer to shave off a bit of weight. It's tapered at the head tube with a big 1.25" crown race to keep things stiff. You can fit a mudguard; the bottom boss is a short way up the leg to make it simpler to work around the disc calliper. At the back, mounting stuff (there's holes for rack and guard) is helped by the inboard position of the calliper, mounted to the chainstay like they do these days. The discs themselves are Avid BB7s, which are some of our favourite mechanical units, easy to set up with lots of power on tap. 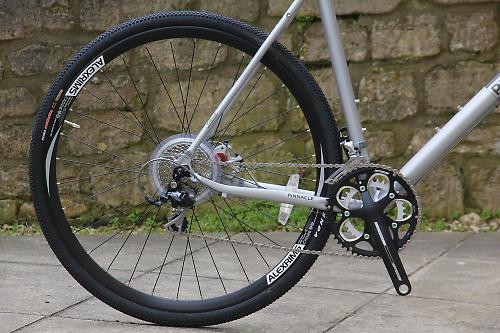 Transmission-wise, the big news is that Pinnacle have managed to squeeze 105 levers and rear mech into the deal; the front is Tiagra. That's very solid spec considering that other bikes we've tested at a similar price have sported Sora, two rungs lower. The chainset is an FSA Omega unit on an external BB, not showy but prefectly capable. The gearing is commuter rather than 'crosser, a 50/34 to the fore and a 12-30 cassette. Assuming you're not towing around a world tour's worth of kit, that should be fine. You roll along on Kenda Small Block 8 tyres out of the box. As a do-it-all tyre they're hard to beat: quick enough for fairly long stints on tarmac with enough grip and cushioning for trail use too. They're not the best in the slippery stuff, and if you're going to confine yourself to the road then swapping them for slicks will make the bike a fair bit faster. Rims are Alex CXD26 – they're not shallow, but they're not really semi-deep, so what are they? Micro-deep? – and they're laced to Joytech hubs. The wheels aren't light but they look pretty sturdy. 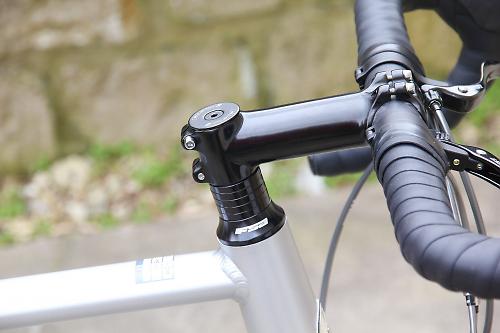 Other finishing kit is fairly unremarkable, Pinnacle-branded alloy components including a double butted drop bar. The saddle is a FWE Sport one that looks a bit Charge-Spoony. All-in the bike weighs a very respectable 10.75kg (23.7lb) without pedals in the XL size we've got. That's light enough for a bit of actual cyclocross racing too if you fancy a go.

Currently Evans are offering £100 of free kit when you buy this bike, making it look like an even better deal.

The eagle-eyed among you will be thinking, "hang on! this isn't just in, Dave's done the Hell of the North Costwolds on it already". It's true, it doesn't look like this at the moment, it's significantly more muddy. But we're only halfway through testing it, so you'll have to wait a bit longer for the full report. Stay tuned.